Bellator 168 was broadcast live on Spike TV this afternoon with a rare 4pm EST start time. The card was held at the Mandela Forum in Florence, Italy and headlined by former UFC competitors Alessio Sakara and Joey Beltran. 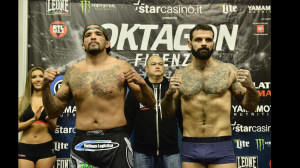 The main event did not take long as Sakara defeated Beltran via strikes just one minute and twenty seconds into the contest.

Wrestling standout Ed Ruth returned to the Bellator cage on short notice to take on Emanuele Palombi in a 190-pound catchweight fight.  It only took little more than 90 seconds for Ruth to secure a first round TKO win over Palombi.

By Brian Jensen 30 mins ago

By John Eric Poli 36 mins ago