I recently had the opportunity to catch up with ‘The Native Psycho’ Jordan Griffin ahead of his upcoming Legacy Fighting Alliance featherweight bout in Prior Lake, Minnesota.  Griffin, the founder of the ‘Dirty Dog’ technique holds a professional MMA record of 14-5 since turning pro in 2011. 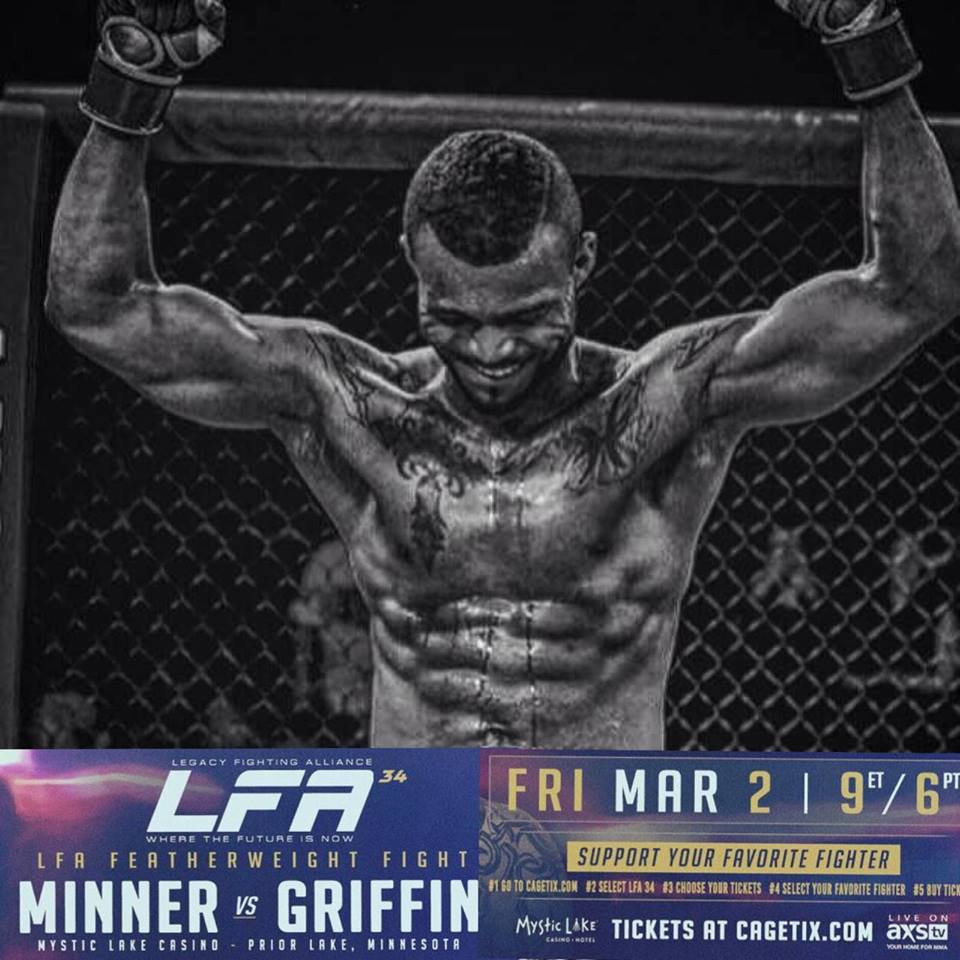 Who is your next opponent?

Minner is a strong wrestler similar to some of your last opponents. What are your thoughts on facing another wrestler?

“Yeah, they just keep giving me these wrestlers, but you know what? I actually look forward to it. To be honest I feel like wrestlers are tough and they like taking a beating. If you’re going to be in the fight business why not fight tough guys?”

Aside from your upcoming MMA fights do you have any other competition goals?

“I plan on competing at IBJFF Worlds in Long Beach, CA. I also plan on going to Chicago for competition. I plan on really stepping it up in the Gi. I really want to see how it is on that circuit.”

Who do you want to fight this year?

“You know whoever gives me the fight. I want fights all the time. I don’t mind fighting. I love fighting.  It’d be very interesting to go to VFC and fight Rob Emmerson. My buddy, Raufeon Stots, fought Emmerson for the 135-pound Victory title belt. I think it’d be interesting to continue to fight at LFA, to stay there and grow; kind of how I did at King of the Cage. I got the chance to fight several times for them, was their champion. It allowed me to really grow and understand the business. It’d be awesome to fight for a LFA title eventually either at 145 or 155. Or both. I just want to fight tough dudes. If LFA wants to give me 4 or 5 fights a year I’ll be there for every one of them on weight and ready to go.”

How do you see your fight career progressing in the next couple of years?

“I think I’m going to make some real money at LFA; hopefully make some real money in the UFC eventually. I think I’m ready for that. I think it’s funny. I fight these dudes and everybody I’ve fought they’re like, yeah, man if they beat Griffin they’re going to go to the UFC. Well what about me? I’m sitting here like damn. You’re talking about me as if I’m a UFC fighter.  That’s great that people think I’m that big of a challenge. If you beat Griffin that’s a benchmark. That means you’re ready. Unfortunately for those guys they did not beat me. I beat the shit out of them. They were not ready. I think it’s about time and hopefully the UFC recognizes that and brings me on board. Cause I’m ready to fight. I have to focus on consistency. I have to focus on exciting fights.”

“I don’t mind fighting wrestlers. I’ve gotten used to it because literally all the guys I’ve fought lately are wrestlers. It’s always the same thing, I just don’t want anyone to wrestle fuck me. I’ve been working on my wrestling and my jiu jitsu. I’ve been working on my striking. Actually, that’s a big thing. I’ve been working on something Duke shows a lot. Using your striking to really stall out the takedowns and prevent things from happening to you. I’m working on being more engaged with my striking. So, I’ve just been working on a lot of things. It’d be kind of interesting to fight somebody who I know is just going to stand with me. I haven’t witnessed that yet. I had a couple of guys and they tried to hang in there. They didn’t last too long. They caught the hands a lil’ and then they tried to duck in and shoot and do all that other funny stuff.”

You have a lot of family and friends coming up for this fight, more so than usual. Does that put more pressure on you when you’re competing?

“No, not at all. I really like it. I’m getting so much support now. I’ve been doing this for almost ten years. I started when I was 18 and I’ll be 28 this month. When I first started nobody was showing up to any of it. It was kind of like, oh this dude wants to fight…We’ll see how long he lasts doing this. It’s just always really been my dream to fight. I really like it. It’s cool. I went from maybe just my mom, my aunt and my grandmother showing up to now I’ve got people hitting me up all the time. Saying things like hey man I can’t wait to see you fight. Man, you’re an exciting fight. People I don’t even know. So that’s always awesome.

“To see how much support, I get from my family, friends and I feel a lil’ weird saying this but the uh fans. All the people who have seen my fights on TV before like King of the Cage and stuff. So, no I do not get nervous when my family shows up. My mom she does not get nervous when she’s out in the crowd. She knows that I show up to give these hands. I say you gonna get these hands, I’m gonna get my rent money and we gonna go home. I’ve sold quite a few tickets and I’m also having a viewing party here in Milwaukee. That’s going to be on 1st and Lincoln at Enlightened Brewery. I’m getting t-shirts made. I think I’m doing more promoting than I’ve ever really done which is sad to say, but I think my focus was just 100% on fighting. People got to see, they’ve got to want to watch me fight. I’ve got to be an exciting fighter. I feel like I’m there.  So now it’s time to focus on promoting myself, promoting the talent. I’ll be stepping that up in 2018.”

So where can people pick up there very own Jordan Griffin t shirt?

“That’s a great question. So, my sponsor, Native American Fighting Gear, they are the ones actually making the t shirt. We’re designing it and then I’m going to release it on social media. I’m trying to get a website built right now for merchandise and upcoming fight announcements.”

Get tickets for LFA now! 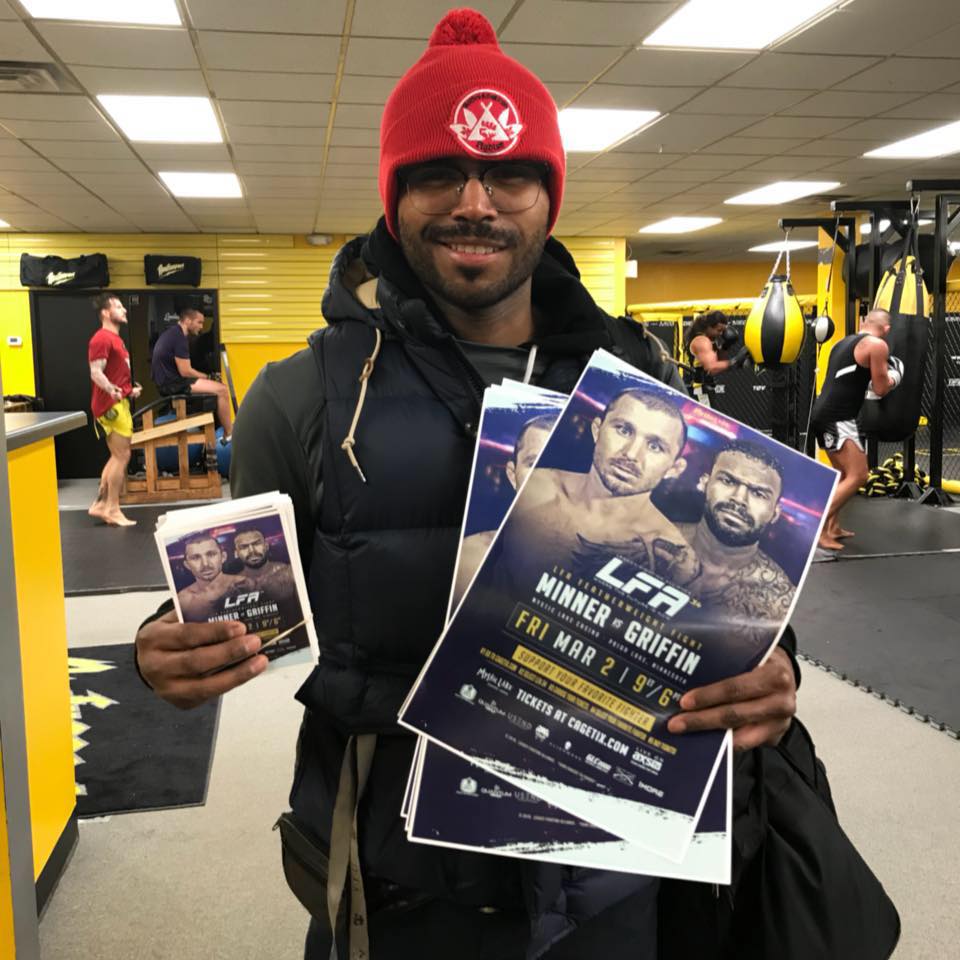