Combat Jiu Jitsu is finally coming to Pennsylvania after having great success out on the west coast.  A brainchild of Eddie Bravo, combat jiu jitsu was first approved by the California State Athletic Commission in February of 2012.  Combat Jiu Jitsu takes the typical ruleset used in the Eddie Bravo Invitational – an all submissions legal 10 minute round and up to three overtime rounds starting from either the back or spiderweb position – and adds open hand palm strikes when one of the competitors is on the ground.  This is a great ruleset to keep your jiu jitsu honest and to help people who are looking to get into MMA ease into the striking aspect of the game.  The next combat jiu jitsu event Eddie has coming up will be Combat Jiu Jitsu Fight Night in Los Angeles on February 23, 2019, featuring Gordon Ryan, Josh Barnett, Fabricio Werdum, and Rustam Chsiev. 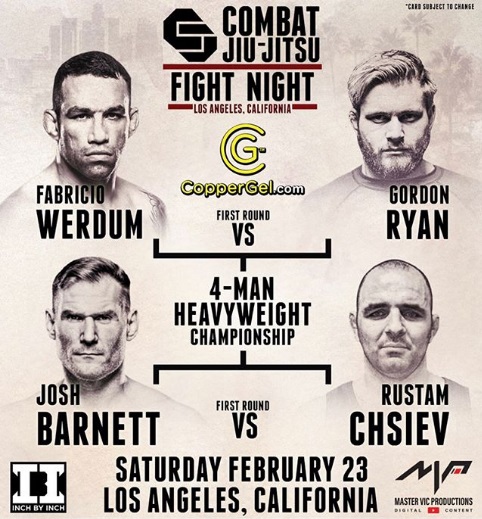 Zach Maslany of 10th Planet Bethlehem and Nicholas Masington of Rat Pack Fighting Systems have been working together to bring the combat jiu jitsu ruleset to the east coast and have finally gotten it approved by the Pennsylvania State Athletic Commission.  Their promotion, PA Combat Jiu Jitsu, will be scheduling their first event within the next few months and they are currently accepting applications from competitors.  You can check them out on their website, or on Facebook and Instagram.

While there has been sanctioned combat jiu jitsu on the east coast, it was held in New York as part of an MMA event and the rules were slightly different than Eddie’s.  The matches ended with a draw if there was no submission rather than the typical EBI overtime rules, and it was held in cage rather than an open mat.  In fact, Nicholas Masington’s son, Dillon “D-Boy” Masington, was one of the competitors in the New York combat jiu jitsu event, so it makes sense that he would want to help bring the ruleset to their home state in the form that Eddie originally intended it.

Zach also has close ties to combat jiu jitsu, since his co-owner at 10th Planet Bethlehem, JM Holland, was in the first ever combat jiu jitsu match featured on EBI 11 and competed at Combat Jiu Jitsu Worlds.  Zach and JM’s black belt, Jon Blank, also recently won the first 16 man combat jiu jitsu tournament at EBI 17, so clearly if you would want anyone running a combat jiu jitsu promotion it should be these guys.  Zach and JM also run the Finishers Sub Only events and the Finishers Open, so you know they have the experience and will do it right to bring a great show to the east coast.  Make sure to keep an eye out for PA Combat Jiu Jitsu’s first event announcement in the upcoming months.

Evander Holyfield returns to the ring for Triller Fight Club’s June 5 event, takes on Kevin McBride, who knocked out Tyson