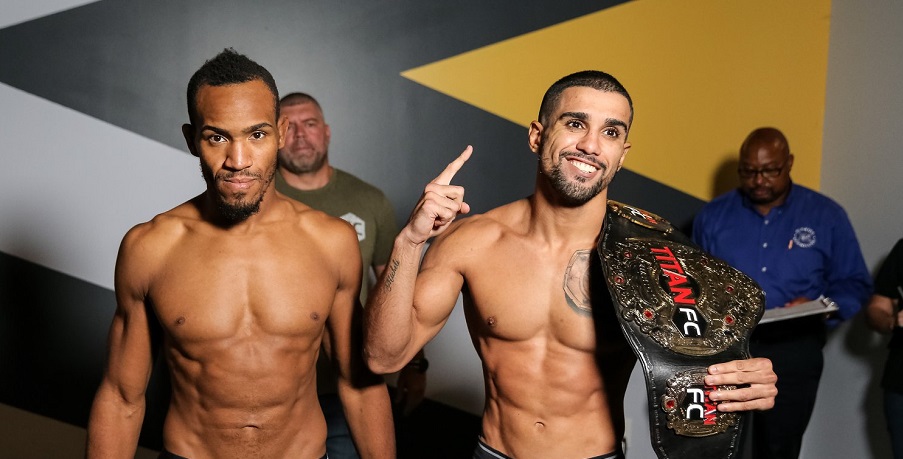 In the main event, Titan FC lightweight champion Raush Manfio was to defend belt against Driven Gym’s Sidney Outlaw.  Outlaw missed weight so the title could not be won.

Outlaw closed the distance early after a brief exchange. Trapped manfio against the cage and picked him up for a heavy dump to land in side control. Worked from side control and tried to mount. Manfio played the hip game and got him in in half guard. Outlaw escaped and secured back and looked for a RNC which got fended off, but Outlaw held onto the head, transitioning into a bulldog choke. Realized he didn’t have it and gave it up, in turn giving his back up but quickly circled out. A brief exchange, center cage to close the round with Outlaw looking to have won the first.

Low kick from Manfio caught and Outlaw catches it and closes the distance to throw a straight right and continued to head hunt after with not much landing. Outlaw is stalking Manfio who is circling away and throwing randomly but not efficiently. Outlaw shoots for a single leg but works for a double and secured the takedown transitioning to a scramble that Manfio finds Outlaws neck, looking for a guillotine. Outlaw escapes and secured Manfio’s back and drags him back to the ground to lock in his hooks. The action rests for a split second and Manfio explodes with a sweep, reversing into Outlaws full guard and starts to posture up to rain down ground and pound. Outlaw scrambled and gets the reversal and ends the second round on top.

Slow start to the third with both fighters feeling each other out center cage. A minute expires with not much thrown. Manfio starts to paw his jab out with nothing finding its mark. Outlaw seems to want to pick up the pace and close the fight with a stamp as he begins to stalk Manfio but Manfio clipped Outlaw with a spinning elbow and drops him. Manfio swarms Outlaw on the ground looking to work for a submission instead of standing his wounded opponent up, to the displeasure of the crowd.

Also, Jose Caceres and Uroš Jurišic duked it out for the organization’s welterweight strap.  The fight was short lived as Jurišic was able to win the title in just 94 seconds.

This Day in History for ONE Championship: Destiny of Champions took place

By Andy Stevenson 9 hours ago