On the heels of Floyd Mayweather and Logan Paul’s exhibition bout, purist of boxing have been calling for heads calling it a disgrace and something that will kill boxing. Every time you hear about how these events are a disgrace or will kill boxing.

Boxing is a tough son of a bitch.

But the truth remains that boxing has always been about the gimmicks and freak shows. Here are four examples of boxing gimmick fights that show us the phenomenon isn’t going away any time soon. 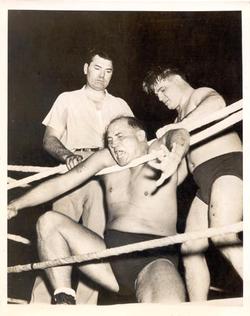 Jack Dempsey was one of the biggest names in all of boxing in the 1910’s and 20’s. Dempsey fought once, twice and sometimes three times a month as a heavyweight. He transcended boxing and became the lineal heavyweight champion. He retired in 1927 after a loss to Gene Tunney. Dempsey was notoriously bad with money. In the 40’s he was scraping by with his manager booking him appearances as a referee in professional wrestling.

Dempsey was now 45 and his manager, Max Waxman, thought that there was money to be made in a Jack Dempsey comeback. During a match in Atlanta, Georgia, Dempsey got into a physical altercation with Clarence “Cowboy” Luttrell. The two shouted, swung punches, and more. Luttrell then called out Dempsey saying, “I’ve licked tougher guys than Jack Dempsey.” Continuing, Luttrell says, “There’s never been a boxer who could beat a good wrestler. I want to be known as the guy who K.O.’d Dempsey.”

The match was booked for June 1st in September and when fight day came, only 12,000 people showed up. To put that in perspective, Dempsey’s last fight as a professional was literally 10 times bigger with over 120,000 people in attendance. Dempsey, who hadn’t trained a minute for the fight, brutalized Luttrell, dropping the wrestler four times winning the fight in the second round. Dempsey walked away with $4000 and boxing returned to it’s regularly scheduled broadcast.

George Foreman was the heaviest hitter boxing had seen in years. He wasn’t the most technical, but he hit like a Ford Escort. Foreman won the Olympic gold medal in 1968. He defeated Joe Frazier and Ken Norton, two men who bested Muhammad Ali. But, Ali was going to play the spoiler to Foreman’a career and dethroned the scariest man in boxing. Foreman, who takes the loss in stride now, didn’t take it so well in 1974.

Vying for another shot at Ali, George Foreman found a place that would almost sanction murder. Toronto allowed Foreman to take on five people in one night. The catch: three round fights and the fighters gave up at least 30 pounds to Foreman. This was a page straight out of the aforementioned Jack Dempsey’s play book, having done the same thing in 1931…twice…within a month.

Who was pulled to commentate the fight along Howard Cosell? None other than Muhammad Ali himself. Ali didn’t let Foreman off the hook for the sad display, “He can whoop these five men, but he won’t whoop one me!” Fans didn’t take to the “fight” too well and came off as pathetic for Foreman. It took just over an hour to finish. 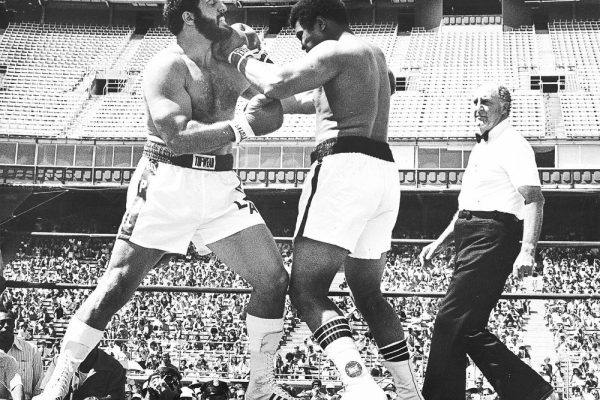 Muhammad Ali is an icon. In 1979, he had just come off a win over Leon Spinks to become the heavyweight champion once again. He claimed to be retired but not yet stripped of his title.

The Denver Broncos defensive end Lyle Alzado was a two time Pro-Bowler and was aiming for a new contract. Alzado was a former Golden Gloves boxer as an amateur. The two, while promoting, even got into a shoving match, which takes guts from Ali to try to push a defensive end Pro Bowler.

The fight was a disaster. Financially it made next to nothing and Ali, after talking so much about how he was going to beat up on Alzado, the fight went to a decision after eight rounds, of which Ali won. Much like Mayweather not knocking out Paul, many knew that the Ali of old was no longer there.

The Broncos Lyle Alzado, left, took on the former heavyweight champion Muhammad Ali at Mile High Stadium in July 1979. 11,128 people showed up at Mile High. The match lasted eight rounds. Alzado and some friends promoted the fight. He had even taken out a second mortgage on his house to guarantee that the event would go off as scheduled. Ticket sales generated slightly more than $200,000, considerably less than Ali’s appearance fee of $250,000. Historical Collection

This one is my absolute favorite. Yes, that Shaq. It’s a bit different from all the events we spoke about earlier due to this being on O’Neal’s TV show “Shaq Vs.” where he challenges athletes from other sports claiming to be the best athlete alive.

In the first of three seasons, Shaq took on Oscar De La Hoya in a five round exhibition. The bout went to a decision which De La Hoya won. But the event was incredibly fun. Shaq, who is 7’1” brought it to De La Hoya who is 5’10”.

Coming out of retirement, De La Hoya couldn’t put away the man who was literally twice his size. But the two had fun and put on a show for the fans.

Shaq would also go on to box Shane Mosley and showed out a gameplan. It was on season 2 of “Shaq Vs.” and the fight went down to another decision with Shaq almost winning 48-47.

The point of the column today, aside from a unique history lesson, is that boxing is no stranger to strange events. Instead, boxing has always quasi-embraced the freak shows and gimmicks, making a buck any way that they can think of. So, next time Snobby McBoxingFan on Twitter tells you on the internet that the next freak show in boxing is a disgrace to boxing and how it’s going to kill the sport, show them this and put them on mute.

What is the Rougarou: Behind the Cultural Nickname of Regis Prograis

Jose Zepeda: “I don’t have to tell you that I’m brave.”

Regis Prograis: “I stayed at 140 for the belts”