Watson was employed by the UFC for 14 years, with his primary duties including the supervision of the organization’s fighters, making sure they “behaved” and stayed out of trouble. Watson, 66, is a Philadelphia native and will now oversee the fighters of CFFC, which holds their events primarily in the north eastern states in the U.S.

Haydak posted the following via his Facebook page earlier this evening: 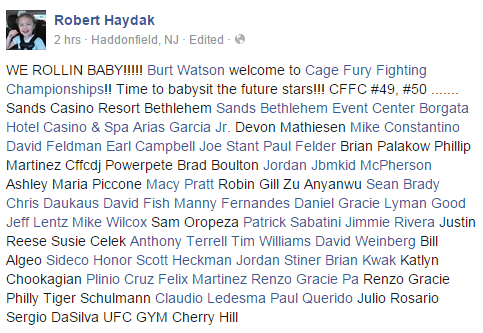 Watson’s long tenure with the UFC came to an abrupt end following the eve of UFC 184 back in February, when an undisclosed “person of authority” had a confrontation with Watson at the weigh ins. This would prompt Watson to quit his job at the UFC, abruptly walking away. Many fighters respected Watson for his “tell it like it is” attitude, keeping the fighters in check with staying focused.