In addition to the amazing main card, the undercard shined a spotlight on the rising prospects and created potential matchups for upcoming Cage Wars events, including the next fight card on April 6. Cole Alaxanian improves his win streak to two with another vicious assault on his opponent. Jose Carrasquero finds himself in the hunt for a welterweight title shot with his Unanimous Decision victory over Matt Rosekrans. 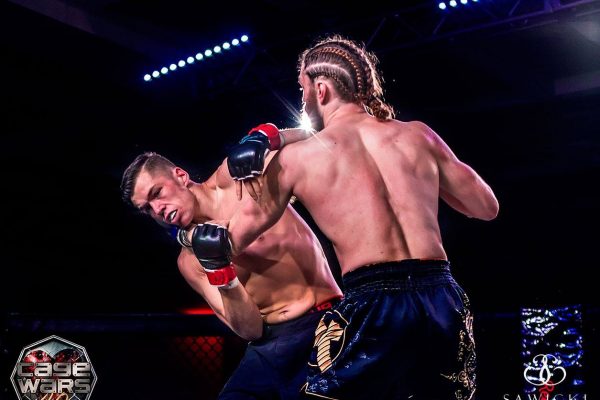 Tanner “T-Pain” Payne and Brian Adriance fought back through three rounds. Adriance controlled most of the fight with his wrestling. Earning a takedown against Payne and holding him down in this novice amateur rules match earned him the unanimous victory over Payne, via judges’ scores 30-27, 30-27, 29-28. Andriance (1-0) and Carroll (1-0) would be an excellent match up between two middleweights at Cage Wars 41. 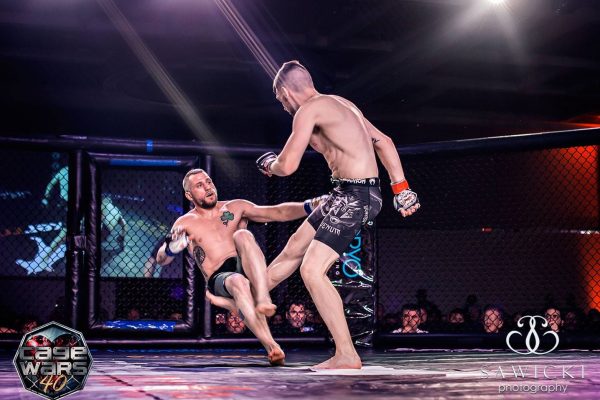 Mohawk Valleys MMA fighter, Kyle Kahler (2-2) displayed his hard work and much improved striking as he captured an impressive victory over Cody Dickershaid (8-13) in Round one via TKO at 1:44. Rumor at the after party was Robbie Bellemere called out Kahler. Bellemare lost his last bout to Kahler’s teammate Davie Doolen.

Jose Carrasquero (2-0) and Matt Rosekrans (0-1), put on a high-level technical striking match for the fans at the Rivers Casino and Resort. Carrasquero earned a unanimous decision victory (30-27, 30-27, 30-27) against Rosekrans. Carrasquero positions himself for a title contender fight and is the favorite entering the bout against anyone he’s fighting. Will Barry mentioned this was a sleeper fight at the beginning of the night. “The Schenectady Joe Rogan” was correct. 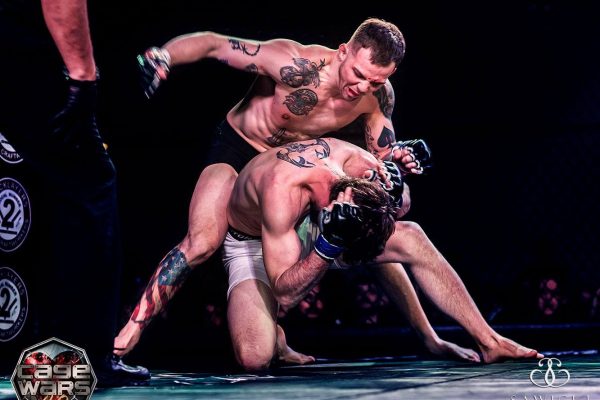 Cole Alaxanian (2-2) punished Frank Mazepa (2-5). Alaxanian has drastically improved from his first two fights, and once again showed off the power in his hands. As a smaller welterweight, weighing in at only 167-pounds, The former Marine unleashed accurate striking that stunned Mazepa. After pounding on a downed Mazepa, and taking his back, Alaxanian rocked Frank several times with heavy hands from the top. Similar to his last fight, after softening up his opponent with strikes, this rising prospect wrapped his hands around the neck of his foe finishing them in the first round with a Rear-Naked choke at 1:25. 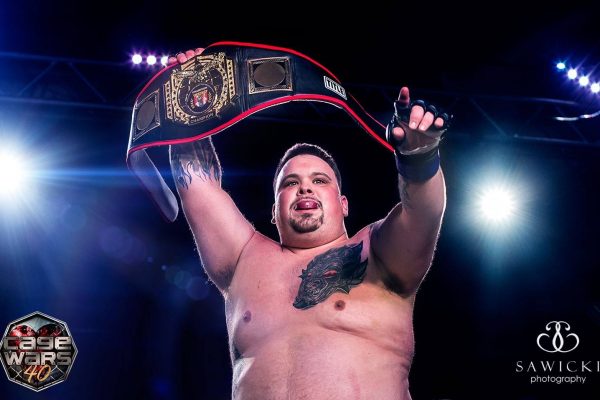 The “Jits Panda” derailed the “Beef Train” Saturday night. As Travis Streeter attempted to use the clinch and grapple with Bob Buskey against the cage, the “Jits Panda” ripped short hooks into the “Beef Train” knocking him off track and forcing Streeter to tap due to strikes. In the post interview with MyMMANews, Buskey mentioned that he could hear Streeter exhale while punching him and he knew he had him then.

The tap out due to strikes came at 1:33 of round one. Buskey is the new USMTA (United States Muay Thai Association) Super Heavyweight Champion. Bob Buskey is now 2-1 in his amateur career.

Corey Norman (3-0) and Alex Marro (3-3), went the full three rounds inside the cage. The first round was full of back-and-forth action. Norman and Marro exchanged strikes and control in the grappling positions. One judge awarded the first round to Marro, which understandably was a tough round to score. The second and third round though was a different story. The social studies teacher and Orchard Park MMA fighter took over, controlling the dominant positions in the grappling. Round three you can see Norman picking up steam as he poured on the strikes against Marro from the top. Corey Norman is the new Cage Wars light heavyweight champion via a unanimous decision (30-27, 30-27, 29-28).

In the featherweight title fight, Kyle Glasheen (3-0) dominated every position against a highly skilled jiu-jitsu artist, Derek Ellis (2-2). Looking like the terminator, Glasheen battled through every leg-triangle attack Ellis attempted. In the second round, Glasheen blasted Ellis with a brutal right and excited the crowd with a crushing hip-toss. After a brutal second round, Ellis stumbled back to his stool. While his coaches were talking to him, it was clearly evident that he couldn’t continue. Referee Steve Rita called an end to the fight in the second round at 5:00. Kyle Glasheen is the new Cage Wars featherweight champion.

Ellis was brought out of the cage on a stretcher and to the hospital. Ellis left this message on Instagram Monday regarding his condition.

Unfortunately Saturday night I didn’t quite have the outcome I wanted. I went into renal failure due to my weight cut, almost had a triangle and an omoplata but my body couldn’t keep up. Time to rest, get back to training and come back with a vengeance. Thank you to all my family and friends who came to support me, like I said no matter the outcome I can’t lose with the love from all of you #MSBJJ #mma #fighter #heartofalion #jiujitsu

Chris Nina Almestica (4-1) proved to everyone he’s the definition of a champion. Fighting Vermont’s Steve Rich (5-1), Rich utilized his wrestling throughout the first round in flawless fashion. He even appeared to have the upper hand while striking as he caught Almestica a couple of times with a left hook that appeared to stun him. Round two though was a different story. Rich’s gas tank looked empty, and Almestica scored a takedown of his own. Once on top, the defending Cage Wars lightweight champion rained down strikes to the face of Steve Rich. While on the bottom, Rich could no longer intelligently defend himself and the fight was stopped at 1:09 of round two, giving Almestica the TKO victory. 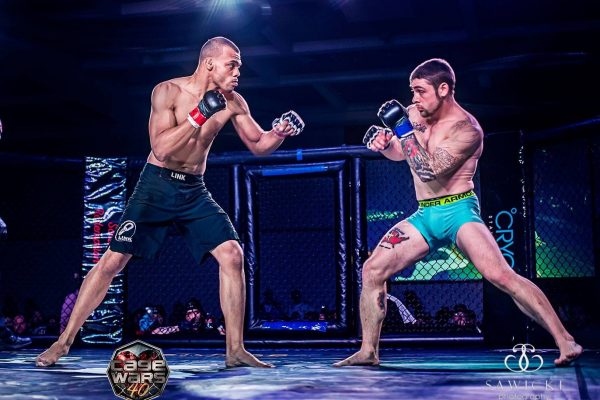 Almestica weathered the storm Rich unleashed. Fighting through the adversity, and making adjustments between rounds, the Massachusetts resident proved to have the makings of a true champion. His will to find a way to win inside the cage at Cage Wars was an excellent litmus test for the young prospect and his bright future. 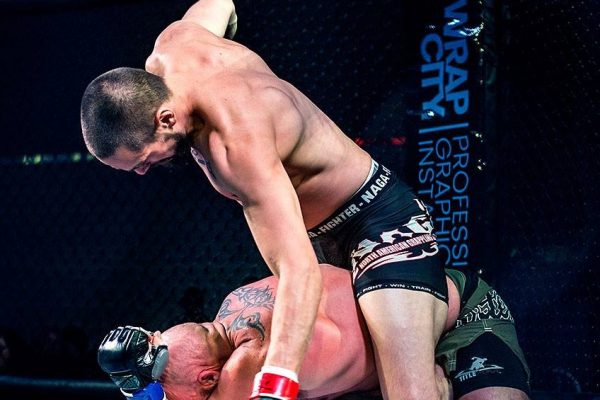 The welterweight champion, Jake Davis (6-1) only needed a minute to retain his crown. Randy Lamb (9-6) immediately looked for the takedown against Davis. Davis managed to find separation from Lamb enough to launch a body freezing knee to the liver. Lamb felt the effects of the champion’s knee. Davis spun around Lamb, sunk leg hooks in, and blasted “Rambo” with Several punches before sinking in a night ending Rear-Naked Choke. Jake Davis successfully defending his welterweight belt with a submission victory in Round one at 0:55. 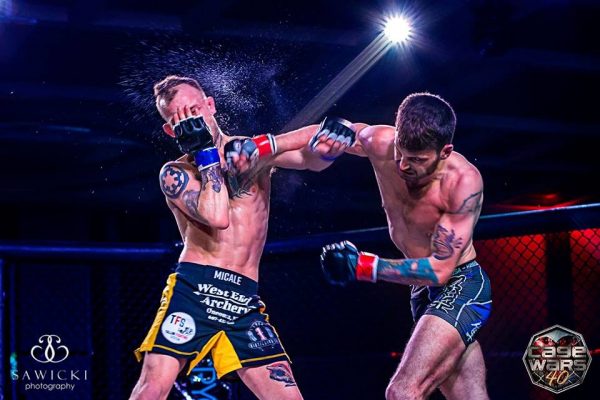 The main event was a great match between two warriors. Michael Doolen (4-1), the defending Cage Wars flyweight champion slugged it out with Sam Micale (4-3) for the entire three three-minute rounds. Inside the cage, Micale mixed up his attack against a heavy hitting Doolen. Landing leg kicks, a jab, hooks, and takedowns. Micale’s control of the center of the cage allowed him to fight through Doolen’s right hand. In Round three, Doolen caught Micale with a monster right that stunned him. Somehow after a scramble, Micale snagged the arm of Doolen as he tried for an armbar. According to Cage Wars’ social media, Micale said “ref, I’m gonna snap it,” and Doolen replied, “Let him break it.” 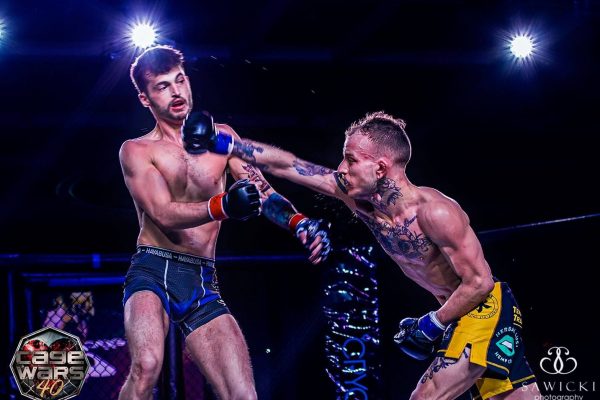 After consulting with Will Barry, The Carroll’s Corner MMA Podcast Fight of the Night honors are awarded to Chris Nino Almestica and Steve Rich. The MyMMANews.com Performance of the Night awards goes to Corey Norman and Cole Alaxanian.

Cage Wars 41 returns to the Rivers Casino and Resort on April 6, 2019. Heavyweight champion, Jeremy Woolfolk is already scheduled to defend his title against Jonnathon Marconi in the main event. Tickets can be purchased at www.cagewarsny.com.

By Brady Briggs 8 mins ago