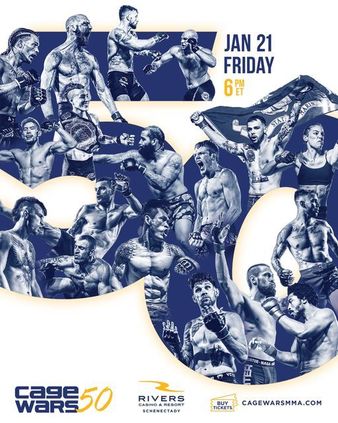 On Friday night, Cage Wars reaches a milestone many promotions only dream of reaching. This amateur mixed martial arts promotion continues to deliver a professional standard few replicate. The quality of fights is always fan captivating, while the video production elevates every show. Cage Wars owners, Tim Rankins and Thomas Marcellino, hospitality towards fighters, event staff, and fans, is second to none.

Cage Wars 50 is an accomplishment they should be proud of. Fans should be excited for big things in the year 2022 as the train isn’t close to slowing down.

Tomorrow night, at Rivers Casino and Resort in Schenectady, New York, Cage Wars will be handing out t-shirts (designed by Jewels Design Studio) to all the VIP seats. Doors swing open at 4 PM and the fights kick off at 5 PM. Fight card No. 50 will host 15 bouts, including four title fights.

This fiftieth installment of the No. 1 amateur MMA promotion in New York State will be headlined by undefeated (6-0) and three-division champion, Corey Norman, as he squares up against Ed Collins (3-2). Norman defends his light heavyweight (205Lb) belt against Collins. Norman is a strong athlete that is capable of competing in any geography of the fight. The CHAMP-CHAMP-CHAMP uses his bear-paws for hands to drag his opponents to the canvas where he applies a strong ground attack. Expect Norman to be leaner for this 205-pound fight.

In the co-main event, Corey Butts (7-2) is scheduled to battle Brett Pastore (2-1) for the lightweight title. Butts is currently the Super Lightweight (165lb) Cage Wars Champion. Can Butts keep his winning streak alive and capture a second division title?

The Super Lightweight champion is a well-rounded fighter. Don’t be mistaken by Butt’s easy-going personality for weakness. When he steps inside the cage he’s a man on a mission. Interested in what Butts had to say about his opponent? Click here to watch his pre-fight interview.

The fan-favorite, Al Marro (4-5), returns to the cage to fight for the heavyweight title against Matt Boyce (9-11) in a featured matchup. Marro is coming off an exciting and hard-fought battle against one of his groomsmen, Corey Norman at Cage Wars 49. “The Tank” Matt Boyce returns to the cage for the first time since his Woolfolk fight in November of 2018. Both of these fighters enter the cage with high levels of experience. Fans better not blink as these big men have the skills to end the fight with a single punch.

Nathanial Grubham (5-2) climbs back into the cage with high expectations against his undefeated foe, Diego DeJesus (4-0). On a five-fight win streak, Nathaniel Grubham plans to take home the United States Muay Thai Association bantamweight (USMTA) title. Grubham has a tall task ahead as Canadian, Diego DeJesus travels south with his perfect record looking to upset the hometown fighter. The audience can expect high-paced and highly skilled fighters to go the distance. DeJesus is no stranger to grinding out unanimous decisions as he has gone the length of the full fight three times in his amateur career.

The featured fight of the night is between two local fighters. Team MVMMA’s Kyle Kahler (6-5) takes on Jucao’s New York Team’s Kyle Glasheen (3-1). These two athletes looking to get back in the winning column. This fight should be an exciting one. Glasheen is a skilled striker, but an even more talented grappler. Kahler is a machine. He walks forward absorbing everything his opponents throw at him (including the kitchen sink) and presses his will onto his foes. Kahler’s strong takedown defense and accuracy, this fight has the potential to steal the show. The fighter that establishes the jab early will dictate the fight for the remainder of the bout.

The entire fight card will be streamed live tonight. Visit www.cagewarsmma.com to watch the Cage Wars 50 fights for free! “Iron” Will Barry will be joined by Against the Cage host, Ben Field on commentary. Barry brings an expert level of combat sports knowledge. Barry is a trainer, coach, former MMA competitor, and licensed referee. The man knows his shit and anyone listening knows that. Fields delivers warmth to the booth as he knows every detail about the fighters he’s interviewed prior to their contests. I mean every detail, personal and professional. The man is an ultimate MMA junkie and brings the background stories to life.

Once again, tickets are sold out for the event at the beautiful Rivers Casino and Resort Event Center in Schenectady, NY.