On this episode of Carroll’s Corner MMA Podcast, Matt “The Alpha” Roman of Tiger Schulman’s joined us to talk about the fight that he wants. Matt Roman is currently an amateur fighter with a record of 5-1. He hopes to make his professional debut on a Bellator MMA card against Baby Slice, also known as Kevin Ferguson Jr.; The son of late Kimbo Slice.

Roman currently hold three amateur welterweight titles simultaneously. The Aggressive Combat Championships title, the KTFO welterweight title, and the CFFC welterweight title. At 5-1, Roman has plans to defend his title against Austin Wolfson, the No. 1 contender, if he doesn’t receive a phone call from Scott Coker and Bellator MMA.

Bellator MMA’s next three shows are listed for Jan. 21, Jan. 27, and Feb 19th. Triton Fights 1 is scheduled for February 24, 2017. Triton Fights is the newly formed organization after KTFO and ACC merger. Roman would battle Wolfson for the Triton Fights title at The Space at Westbury on Feb. 24th, if he does not get the call. But, he’s training for a fight and is ready for whoever bout he accepts.

“It would be a good introduction fight,” Roman mentioned on the show. “I would be able to showcase my skills and show that I could hang with the pros,”

Roman has been calling out Kevin Ferguson Jr. on Twitter and Instagram in hopes Bellator MMA recognizes the matchup. 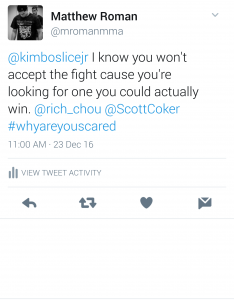