CLASH OF CHAMPIONS CONFIRMED FOR THE TANKO MAIN EVENT 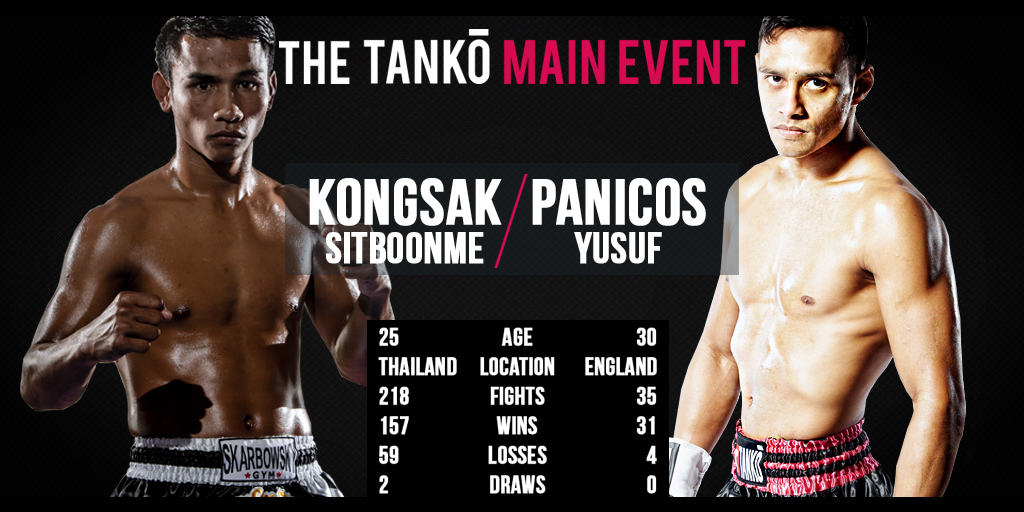 Two time World Muay Thai champion Panicos Yusuf has confirmed his most exciting battle to date versus one of Thailand’s most decorated athletes, Kongsak Sitboonme.

The huge fight is set to take place at the hotly anticipated Muay Thai spectacle the Tanko Main Event, on May 14, 2016, at the Bolton USN Arena.

Fan favorite and Tanko Management athlete, Yusuf, has an impressive record of 35 wins from 39 contests. Yusuf is also one of Europe’s most technically gifted fighters, and will enter the bout in sensational form, with a streak of more than 20 consecutive victories, including wins over WMC European champion Stephen Meleady, former Thai champion Rittijak Kaewsamrit and Dutch superstar Sergio Wielzen.

Twenty-five-year old Kongsak Sitboonme, a former 2-weight Lumpini Stadium, Bangkok champion and winner of the 2010 Sportswriter’s Boxer of the Year award is one of the most successful Muay Thai athletes of this generation.

Kongsak Sitboonme has beaten some of the biggest names in Muay Thai during his career, and brings a record of over 200 contests to the stage on May 14th, as well as his devastating kicking ability and southpaw fighting style. The Thai’s appearance at the Tanko Main Event will be his first on British soil.

The Tanko Main Event organiser, Phil Shedden, said: “This epic bout is something Muay Thai fans all across the country will relish. We’re delighted to be offering guests the chance to witness Kongsak Sitboonme up against Panicos Yusuf. This is the second confirmed fight for The Tanko Main Event card after Reece Mcallister and Fabio Pinca was announced last month”.

Further bouts are due to be added to The Tanko Main Event bill over the next few months.

For more information and to book tickets, get in touch via the http://tankoevents.co.uk/ contact form.

By Dylan Bowker 31 mins ago

By Andrew Sumian 10 hours ago