In case you missed it, President Donald Trump is going to be guest commentating on this weekend’s boxing match between Vitor Belfort and Evander Holyfield put on by Triller. While presidents have dabbled in combat sports before, none have actually commentated a fight to my knowledge. Abraham Lincoln wrestled and was very good at it and Teddy Roosevelt practiced judo and Jiu Jitsu. Trump has had a long history of involvement in combat sports.

Regardless of your opinion on the former president, his history with boxing, MMA, and pro wrestling is undeniable. Donald Trump has a flair for the dramatic and he and the theater of boxing are two peas in a pod. But Trump’s draggletailed history with boxing has been well documented.

One of the first, and the most notable, forays into fight promotion was Donald Trump putting on the Mike Tyson vs. Michael Spinks fight in the summer of 1988. At the time, both Tyson and Spinks were undefeated. Tyson had the WBC, WBA, and IBF heavyweight belts to his name. But Spinks was the Ring magazine and lineal champion, which is highly coveted in boxing. The fight wasn’t much of a fight as Mike Tyson put Spinks away in only 91 seconds.

The fight was held at Trump’s Atlantic City Convention Hall across from Trump Plaza. To get the fight, Donald Trump put up a record amount for the site fee: $11 million dollars.

But, the event was a success financially. After it happened, Tyson vs. Spinks was the richest fight in boxing history making $70 million. Mike Tyson made $22 million which puts him at making about $241,758 a second in the fight. Trump Plaza casino raked in $11.5 million on fight day. Atlantic City as a whole made $300 million on the weekend, up from its norm.

Trump’s lead up to the fight, and the aftermath, for that matter, were pretty dramatic however. First of all, he was in bed with the notorious Don King who the public saw as taking advantage of Tyson after the passing of Cus D’Amato, Mike’s long time trainer and father figure.

But even more recently, in 2005, a book by Tim O’Brien had a rather scary moment for the future president of the United States. According to O’Brien, while Mike Tyson was married to Robin Givens, Tyson paid Trump a visit and asked him, “I have to ask, are you fucking my wife?” Imagine Donald Trump sitting at his desk and the most intimidating man alive walks in accusing him of sleeping with his wife. I, for one, would have needed new pants.

Then, after Tyson was accused of rape, prior to his conviction and incarceration, Trump drew the ire of the media by defending Tyson saying, “she was dancing and smiling for him” and that “she was alone in his apartment.” The victim blaming of Trump did not go over well.

After the debacle with Tyson, some would think that Trump’s boxing promoting days were over.

During the Tyson rape trial and aftermath, Donald Trump started his next big fight. Evander Holyfield has just defeated Buster Douglas and was looking for the next big fight. While he was looking at Mike Tyson, that didn’t materialize. Instead, Holyfield opted for boxing legend George Foreman. George Foreman had been retired for 10 years and came back in 87 and astoundingly gone 24-0. That was the fight Evander Holyfield opted for.

To get the fight, Trump threw loads of money at the promoters for the casino sponsorship for the event which he got. The promoter, Bob Arum, had closed the deal and the “The Battle of the Ages” was set after Trump paid $11.5 million to host the event.

Then, the Gulf War began and the US went to war with Iraq after Iraq invaded Kuwait. In the contract, there was an “Act of War” clause that allowed for renegotiation of the the fight. Trump threatened to sue Arum and the promoters should they not come to the table. With the fight being too close to find a new suitor, Top Rank was forced to come to the table. The deal changed to Top Rank keeping the gate, Trump gives them $1 million, and hotel rooms. The total after the ticket sales and the million: $9 million.

The event went off and eventually Holyfield our Foreman away in round three. But Trump wasn’t done working with promoters.

A change of direction: MMA

In the early 2000s, Donald Trump offered to save a small company owned by the Fertitta brothers and Dana White. This little known company, called the UFC, was struggling to find places to host their events and Trump opened his Taj Mahal to host their events.

But that friendship was not so solid as to keep Trump from funding an MMA organization directly stated to take on and take down the UFC. Affliction Entertainment (yes, that Affliction) wanted to take on the UFC in the early 2000s. They set themselves up to be direct competition to the UFC. Who put their face and capital into Affliction? Donald Trump. 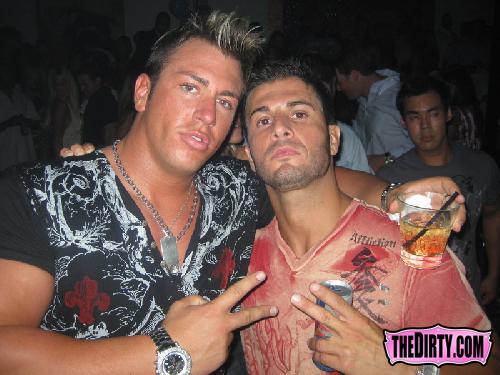 Both of the Affliction events featured MMA legend Fedor Emelianenko with the third to feature him as well. That is until Josh Barnett failed a drug test which canceled the entire event and the entire promotion. While Trump and Affliction were around, however, some of the biggest names in MMA history fought in the promotion’s short lived ranks. The aforementioned Fedor and Barnett were there as well as Andrei Arlovski, Vitor Belfort, Matt Lindland, Little Nog, Tim Sylvia and Gary Goodridge.

Not much is known about Trump’s deal with Affliction other than his image and capital were involved. The rest is bound up by legal red tape. That leads us to the next phase in Donald Trump’s promoter career… 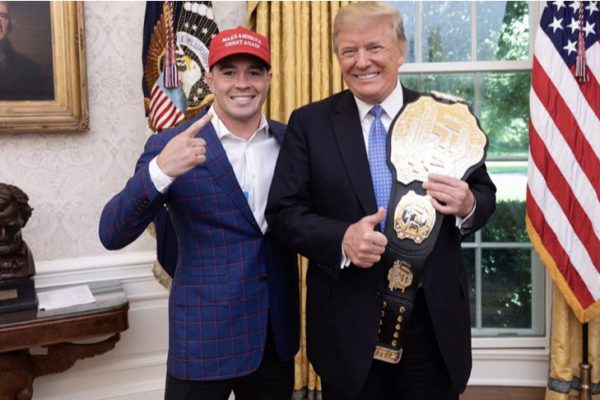 Most recently is Donald Trump’s love affair with Dana White and the UFC. As sitting president, Trump attended UFC 244 which was the BMF card after Jorge Masvidal stated his support for the sitting president.

Dana White even lobbied Donald Trump to plead for mercy from Iran for Navid Afkari. The two are quite close

But, the most notable relationship with the UFC is Trump and Colby Covington. After almost being cut from the UFC for being boring, Covington based his entire heel persona on Donald Trump’s presidency, wearing the “Make America Great Again” hat to pressers and interviews. After winning the vacant interim welterweight title, White arranged a meeting with Covington. Covington and Trump went on to form a relationship. After beating Tyron Woodley, Trump then called Covington in the middle of his post fight interview on live television.

Trump has also had a few appearances on WWE. You’ve seen the GIFs of that for sure. Trump is also a WWE Hall of Famer as well.

This weekend, Donald Trump returns to combat sports and will commentate on the main event between Vitor Belfort and Evander Holyfield.

Don’t miss that fight, Trump’s commentary, Silva-Ortiz and more. Order the fight on FITE.tv below!