When disaster strikes it can bring out the best or worst in people. Whether it is sustaining a injury or losing a competitive match, struggle is a part of the process in becoming better. Art always has a way of imitating life in many forms. Participation in the grappling art of Brazilian Jiu-Jitsu does not guarantee one’s problems will all together vanish, yet it teaches us how to deal with them because there is always a way to make the best out of a bad situation. 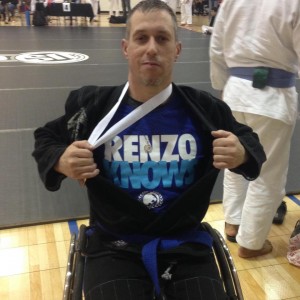 Top of the morning begins another day for warrior on wheels, Brian Freeman. A disabled Veteran, Freeman is a BJJ blue belt who has been a participant in the field for two years. He is known for using his warrior mentality to take on everyday challenges on and off the mat. Life in Freeman’s shoes has given him a full appreciation for life. This helps him to push through adversity as he is learning to adapt to his current positions as a disabled grappler, single father, and aspiring role model.

Pleading a service to his country, Freeman enlisted in the U.S. Navy in 1996 as an Avionics Technician. While enlisted, a terrible accident occurred which would lead to a series of traumatic events altering the Navy airman’s life forever.

“I was an avionics tech in the Navy working on the P3 Orion (A Lockheed P-3 Orion is a four-engine turboprop anti-submarine and maritime surveillance aircraft). I was injured by a piece of falling radar gear, then later in a car accident. November 7, 2007, I had to have surgery to repair my spine and woke up from surgery paralyzed completely below my chest.”

Carrying with these unseemly set of physical limitations Freeman faced a problematic obstacle to overcome. However his positive attitude and perseverance made him game for any challenge. This set the course for his journey into Martial Arts.

An avid fan of the UFC, this fascination opened Freeman’s mind to the various styles of fighting. This later sprung the idea of getting his daughter Katie involved in Brazilian Jiu-jitsu. Through her passionate participation, request and encouragement, Freeman soon found himself training on the mat. This decision would not only break the boundaries of his prescribed disabilities but also restored inner peace inside him.

“When I was first paralyzed I was thinking about my daughter’s future. I wanted to get her involved in something that would help her defend herself and give her self-confidence just in case I died and wasn’t here to protect her. I got her involved in Karate, then Tae Kwon Do, then BJJ. She loved them all but really liked BJJ. I would roll around with her at home and she got the idea I should try a class. ”

“I started doing five months of privates to give me a solid knowledge base of concepts along with techniques. I was excited every day I trained because I wasn’t in my wheelchair or surrounded by other disabled athletes. I was just a normal guy out there. It’s given me amazing experiences from the personal ways it’s helped me to the people I’ve met and the places I’ve been. It’s changed my life for the better in too many ways to count.”

Having such great passion for a new hobby, one will put forth the effort in maximizing their experience. So it would come to no surprise finding Freeman testing his skills in competition. Competing in BJJ tournaments across the country the paralyzed fighter goal as a competitor is simply to challenge himself and learn more about the art in an intense environment. This learning journey has also rewarded him with high accolades as a grappling competitor which includes a third place award at the BJJ Pan American Championship.

‘When I think back on my matches, what stands out the most are the things I learned,” Freeman revealed. “All of the adrenaline and excitement and celebration from victory fade but the lessons stick with us forever.”

“I compete to test myself and my Jiu-Jitsu. For me the medal is a reminder of hard work and an experience. The color of the medal doesn’t matter to me and I don’t feel any less fulfilled if I leave a tournament without a medal. I don’t want to just learn the art for the sake of a medal, I want to understand the art for the purpose it was created.”

Freeman’s presence in the grappling community is rapidly becoming highly recognized. Showcasing that nothing is impossible he has become an inspiration to many. Recognizing the positive impact he has on others Freeman is organizing many side projects to help others.

“A month before I became parlayed I prayed to God to put me in a position to help people. I held on to the thought that my paralysis had something to do with that prayer.”

I have recently finished putting together a motivational and educational seminar. It’s an eye opener to what others like me experience and overcome to be competitive but also the beauty and power of the adaptability of the art. I’ve also been working with my sponsor, DeuS Fight Co on a project called, The Adaptive Warrior Project.”

“It’s a line of shirts, rash guards, and gi’s (martial arts uniform) that pay tribute to the “Adaptive Warrior Fight Club” and proceeds go towards helping myself and a few others compete so others can see how we overcome to be just as normal as everyone else.”

Never Give Up! That has been the motivation wheel that has driven Brian Freeman to where he is today. Even with the many challenges conquered his mission is far from complete. Motivational Ambassador, rising in the BJJ belt rank, or competing nothing is off limits. This story serves as a reminder there is always a way to make the best out of any situation.

“ANYTHING IS POSSIBLE. DON’T GIVE UP ON YOUR DREAMS. DON’T LET ANYONE TELL YOU THAT YOU CAN’T. TAKE WHAT YOU’VE BEEN BLESSED WITH, MAKE IT A WEAPON, BE A WARRIOR.”