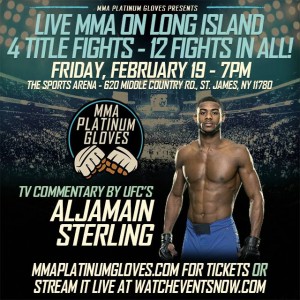 Sterling is a former UFC bantamweight fighter that is currently on the free agent market. The professional fighter is currently 12-0 and 4-0 in the UFC. Three of his victories in the UFC are finishes, two by submission and a TKO. Sterling’s currently the No. 5 ranked fighter in the bantamweight division.

The “Funk Master” is a Long Island native that hails from Uniondale. He finished up a successful NCAA wrestling career at Division III SUNY-Cortland as a two-time all-American. Prior to entering the UFC, Sterling was crowned the bantamweight champion in Lou Neglia’s Ring of Combat, then went onto competing in Cage Fury Fighting Championships, where he won the bantamweight title as well, and successfully defended it three times.

Since being a free agent, the 26-year-old received an offer from all of the major promotions, including Bellator MMA, One FC, and the UFC. According to MMA Torch, Sterling will be announcing his decision next Monday on Ariel Helwani’s MMA Hour program.

At MMA Platinum Gloves 12, Sterling will be the color commentator. Be sure to watch the stream if you’re unable to attend this event. The fight card also includes two catchweight fights, one at 190-pounds between Eric Ott and David Michal, and the second CW bout is at 175-pounds between John Gotti and Nathan Huluska.