The Professional Fighters League (PFL) finished off their inaugural regular season schedule with a 10-bout card from Ocean Resort and Casino with PFL 7. With seven playoff seeds up for grabs the action did not disappoint. Of the seven fights with playoff implications, six ended in stoppages, propelling the victors into the post-season.

“The fighters continue to impress me every time they step into the cage,” said PFL President of Fighting Operations Ray Sefo. “The fighters showed the kind of heart and determination we hoped they would when we came up with this league format. To watch them bring it the way they did with so much on the line was so exciting for me.”

In the main event Smealinho Rama defied belief with his last second win over rugged challenger Jamie Abdallah. The two light heavyweights traded shots as momentum swung back-and-forth over the first two rounds. Rama squeaked into the playoffs as the 7th seed when the cage-side physician called the contest before the start of the third frame.

Bozigit Ataev, fighting for just the third time in 12 years, turned back the clock on Sean O’Connell with a first round TKO that locked him into the 4th seed in the light heavyweight bracket. Ataev battered O’Connell from the opening bell with strikes that left the part-time broadcaster wobbled and bloody. On the strength of the five points he earned in his first regular season fight, O’Connell will be the 6th seed.

Brazilian newcomers Alexandre Bezerra and Handesson Ferreira made quite an impression in their first PFL bouts. Bezerra landed a high-light reel flying knee that ended Magomed Idrisov’s 2018 PFL campaign while Ferreira decimated Paul Bradley just 20 seconds into their win-and-get-in welterweight bout. The two first round stoppages sent both alternate fighters into the playoffs in the 5th seed. Bezerra in the featherweight bracket and Ferreira in the welterweight division.

Heavyweights Caio Alencar and Mike Kyle dueled for 15 minutes in their quest to secure a post-season berth but it wasn’t to be. Fellow heavyweight Josh Copeland’s only hope of remaining in the playoff picture was an Alencar decision win and his prayers were answered when the big Brazilian failed to finish off Kyle. Despite his decision win, Alencar is done for 2018.

Swedish striker Sadibou Sy made quick work of alternate Caio Magalhaes in their do-or-die middleweight scrap. Sy, who came up short against another Brazilian grappler in his first bout of the season was set on getting his striking game going early. It was a head-kick that started the finishing sequence but it was a flurry of pinpoint punches that ended Magalhaes night and dashed his post-season dreams. Sy will enter the playoffs as the 5th seed.

Emiliano Sordi was a late addition to the light heavyweight division but he didn’t take much time to establish himself as a playoff contender. The Argentinian blasted Jason Butcher with a series of punches that notched the TKO victory just 16 seconds into the match, the fastest knockout in PFL history. Sordi will enter the playoffs as the 5th seed.

Following their inaugural regular season finale, the Professional Fighters League (PFL) has established their final playoff lineups, making MMA history with the first ever playoff-style competition in the sport. Beginning October 5 in New Orleans, fighters will start their journey towards the 2018 Championship and a share of the elusive $10 million grand prize. All playoff events will be broadcast on Facebook Watch and NBC Sports Network.

Fighter’s positions are based off of a point system, with knockouts and submissions adding more value to their point totals. The top eight athletes from each weight class will participate in the competition and matchups for the finale will be determined following the final playoff fight.

Official brackets for the three playoff events are as follows: 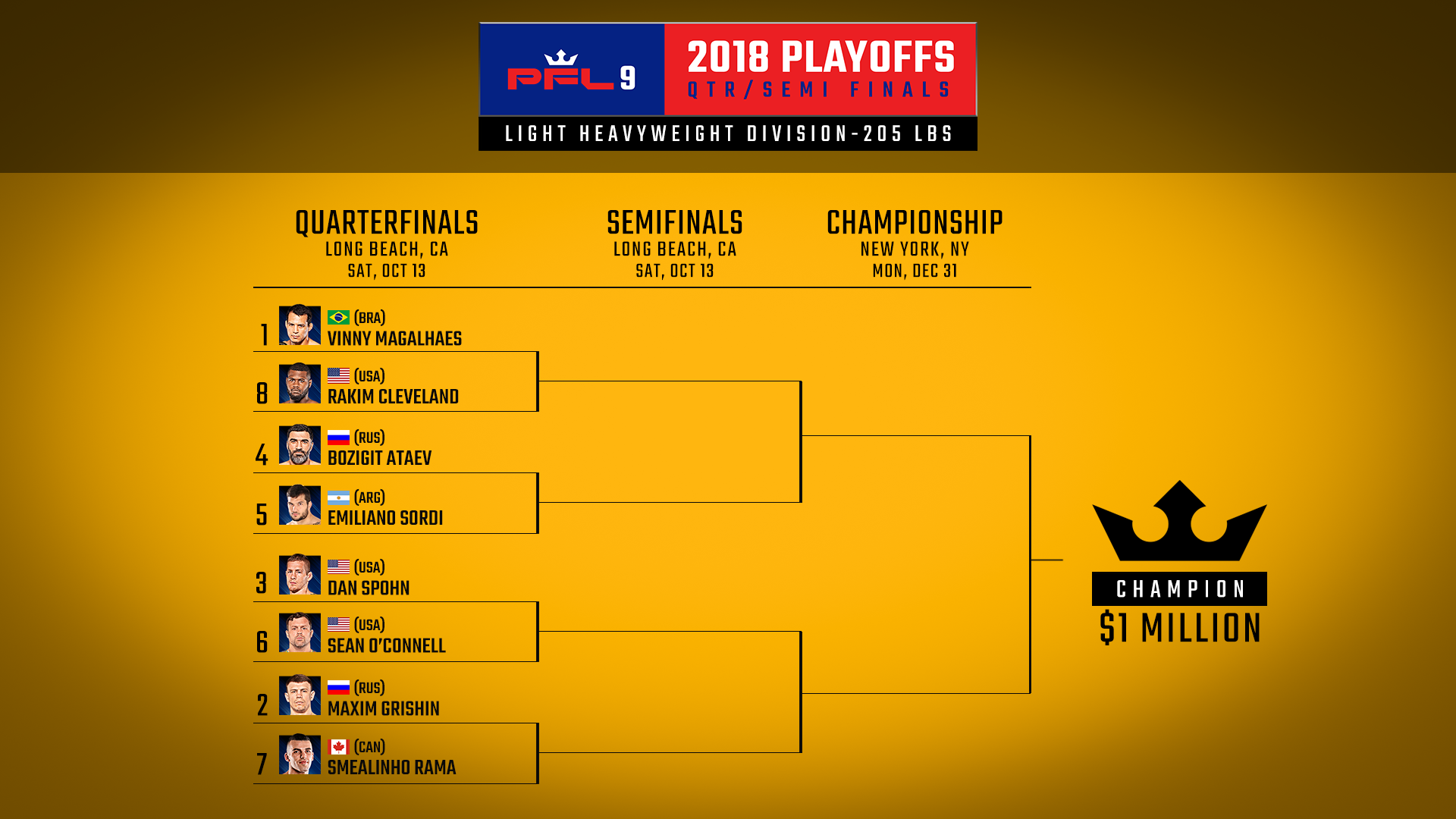 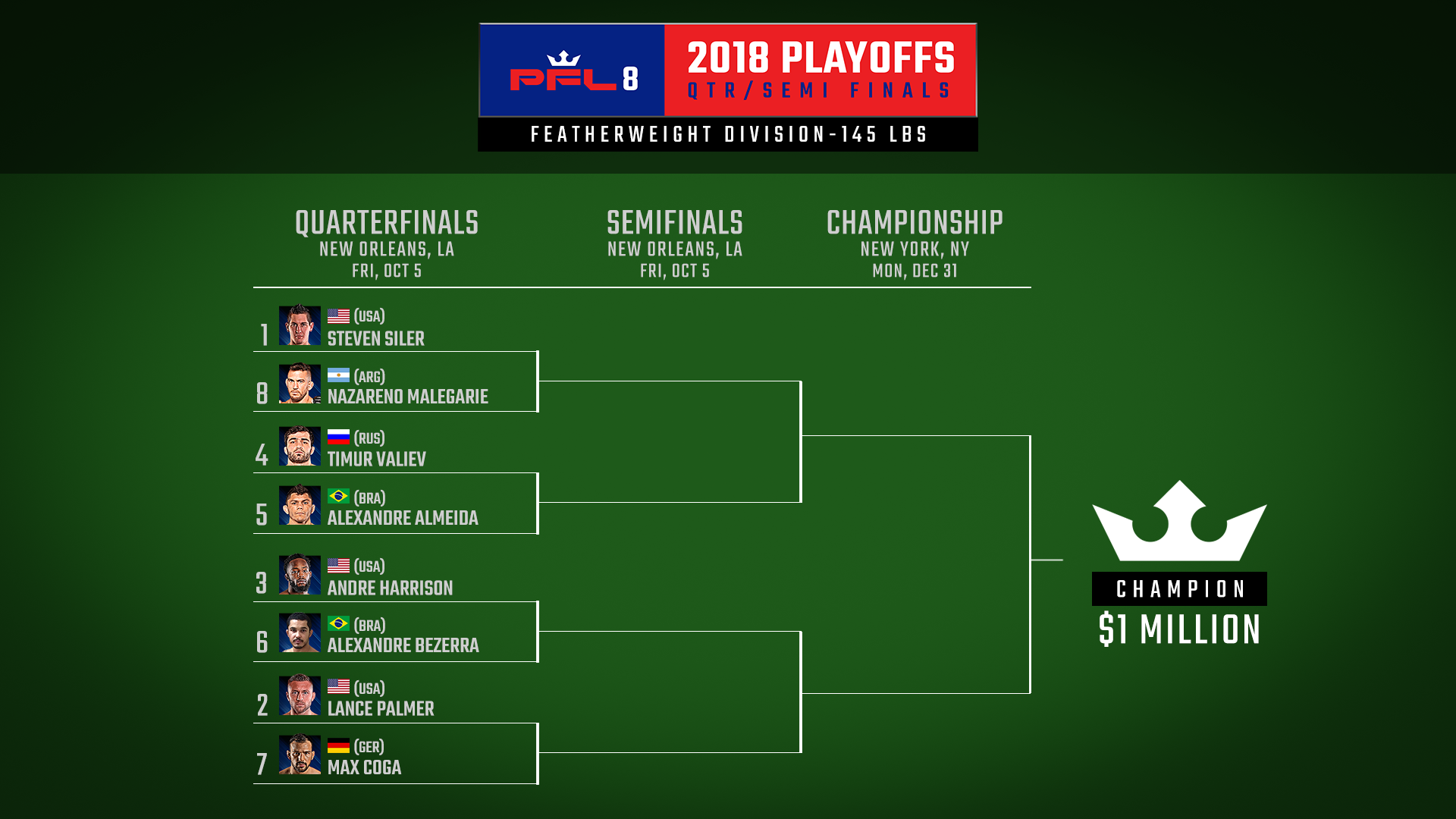 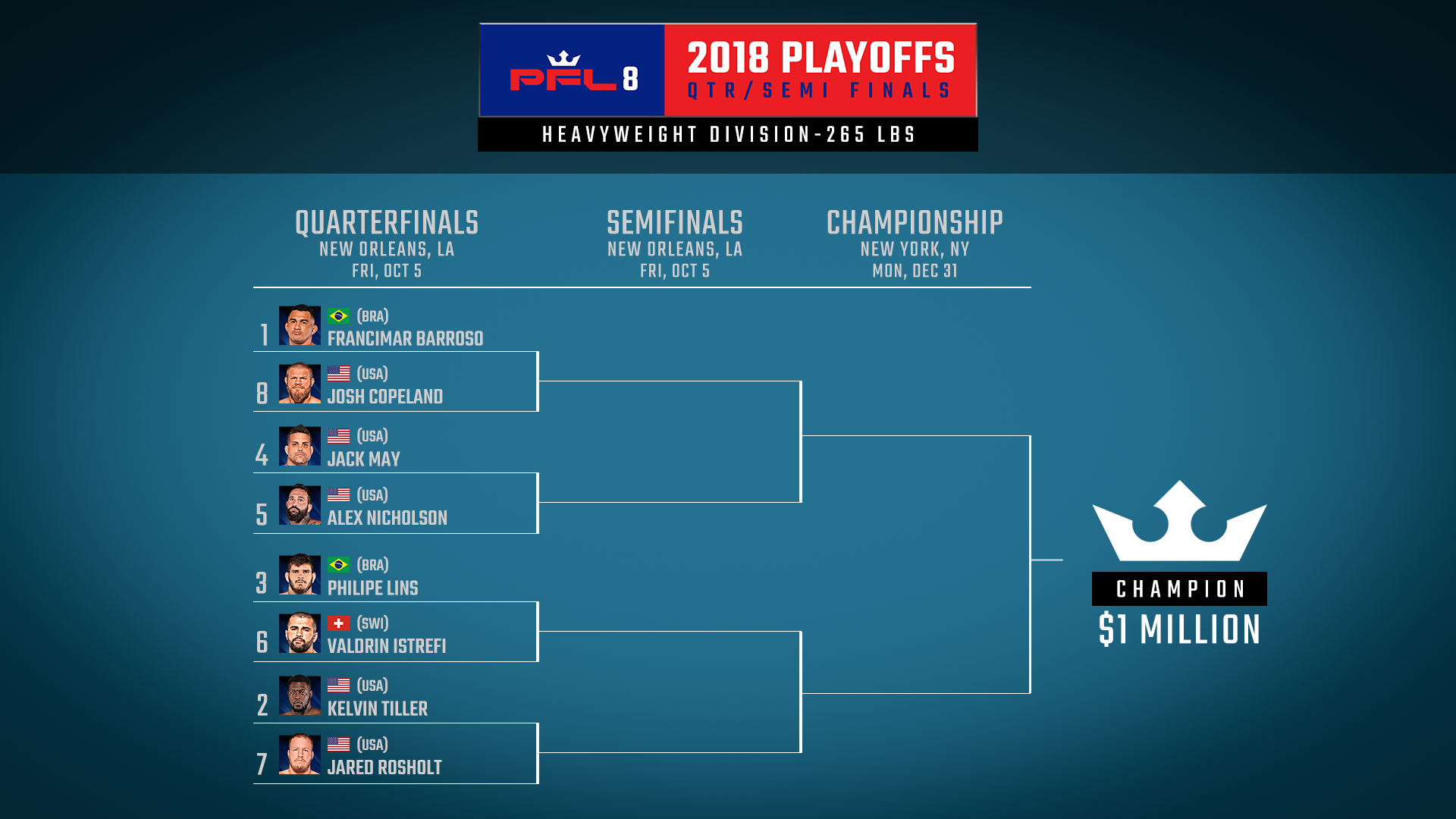 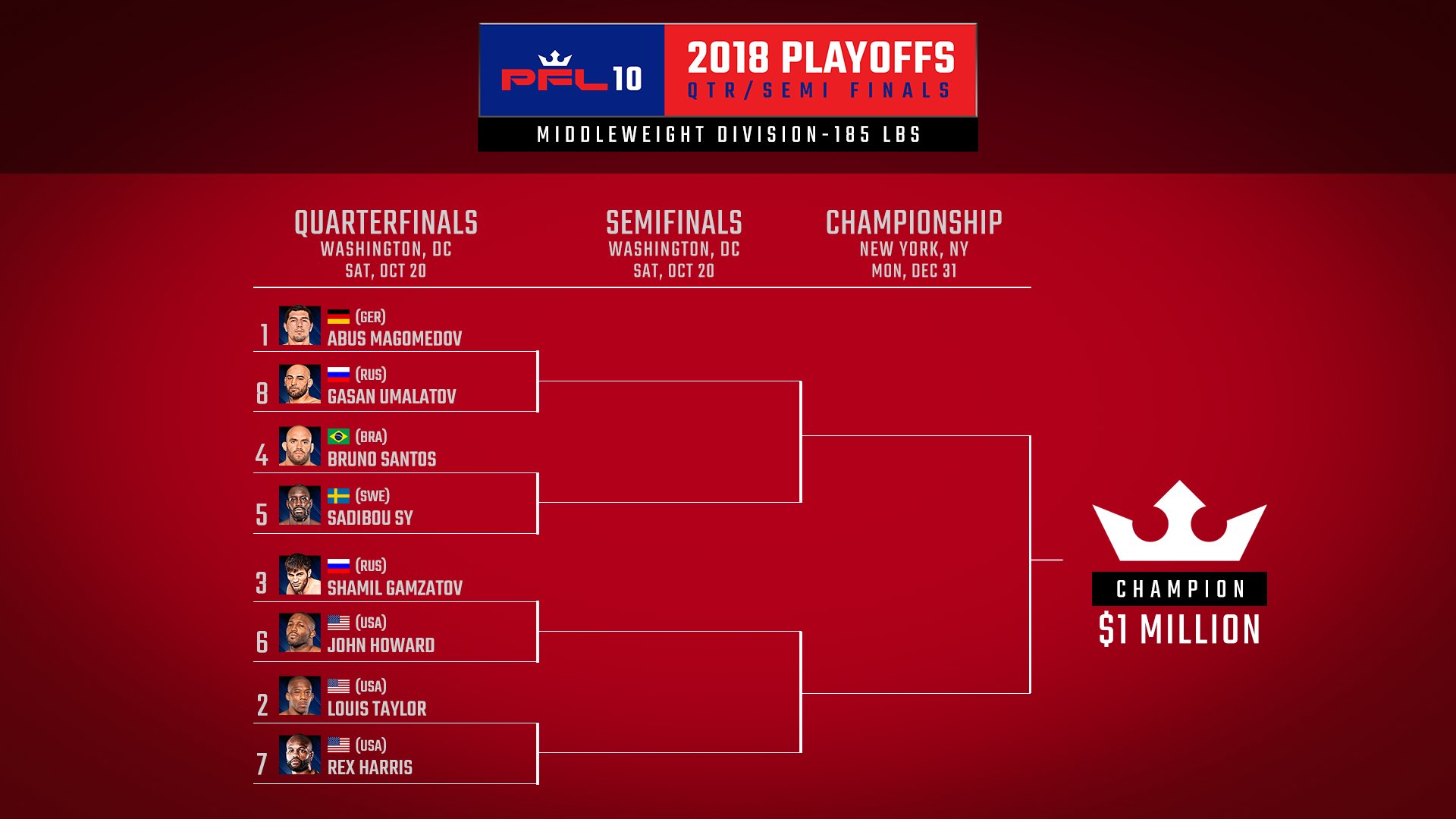 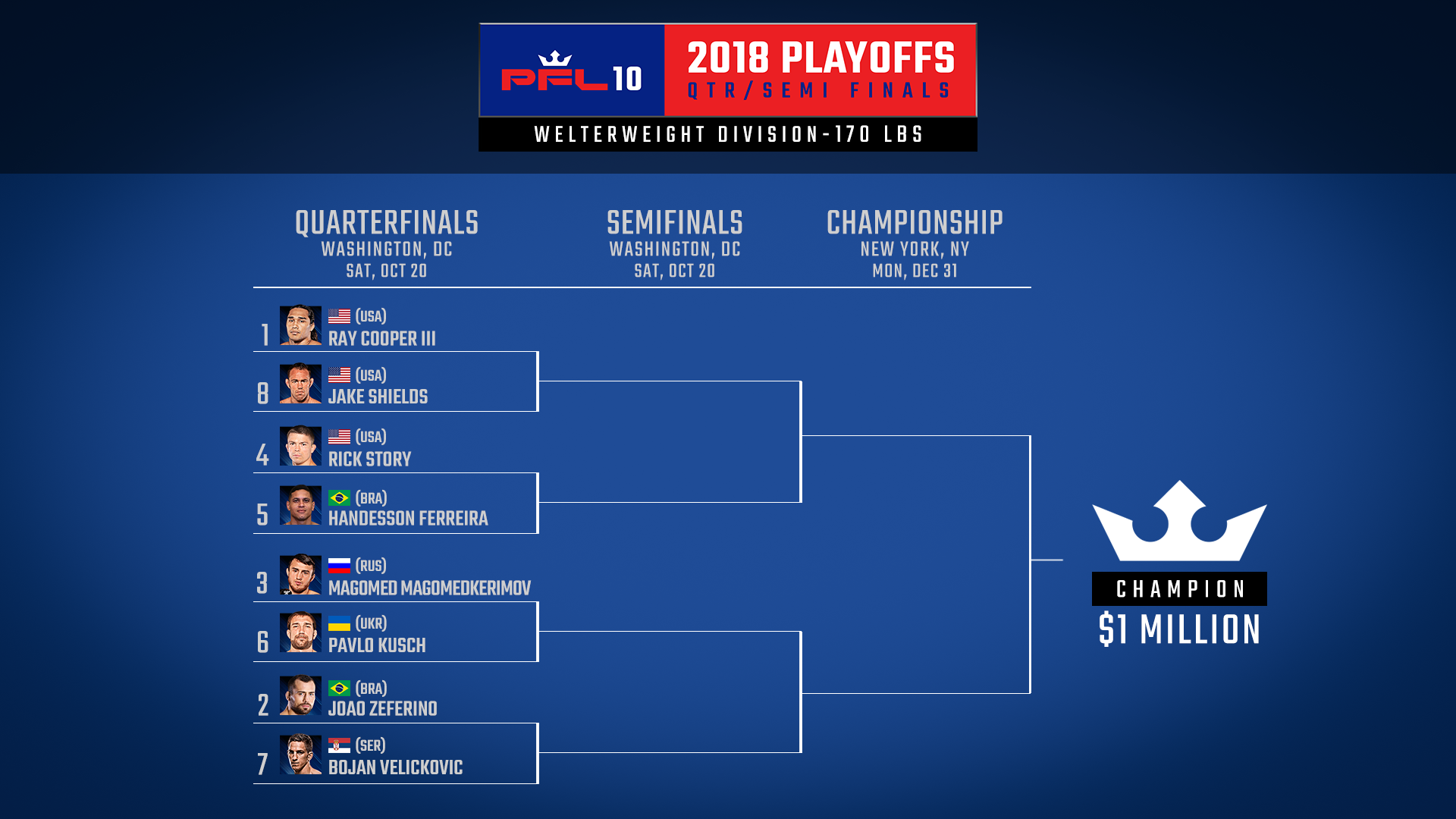 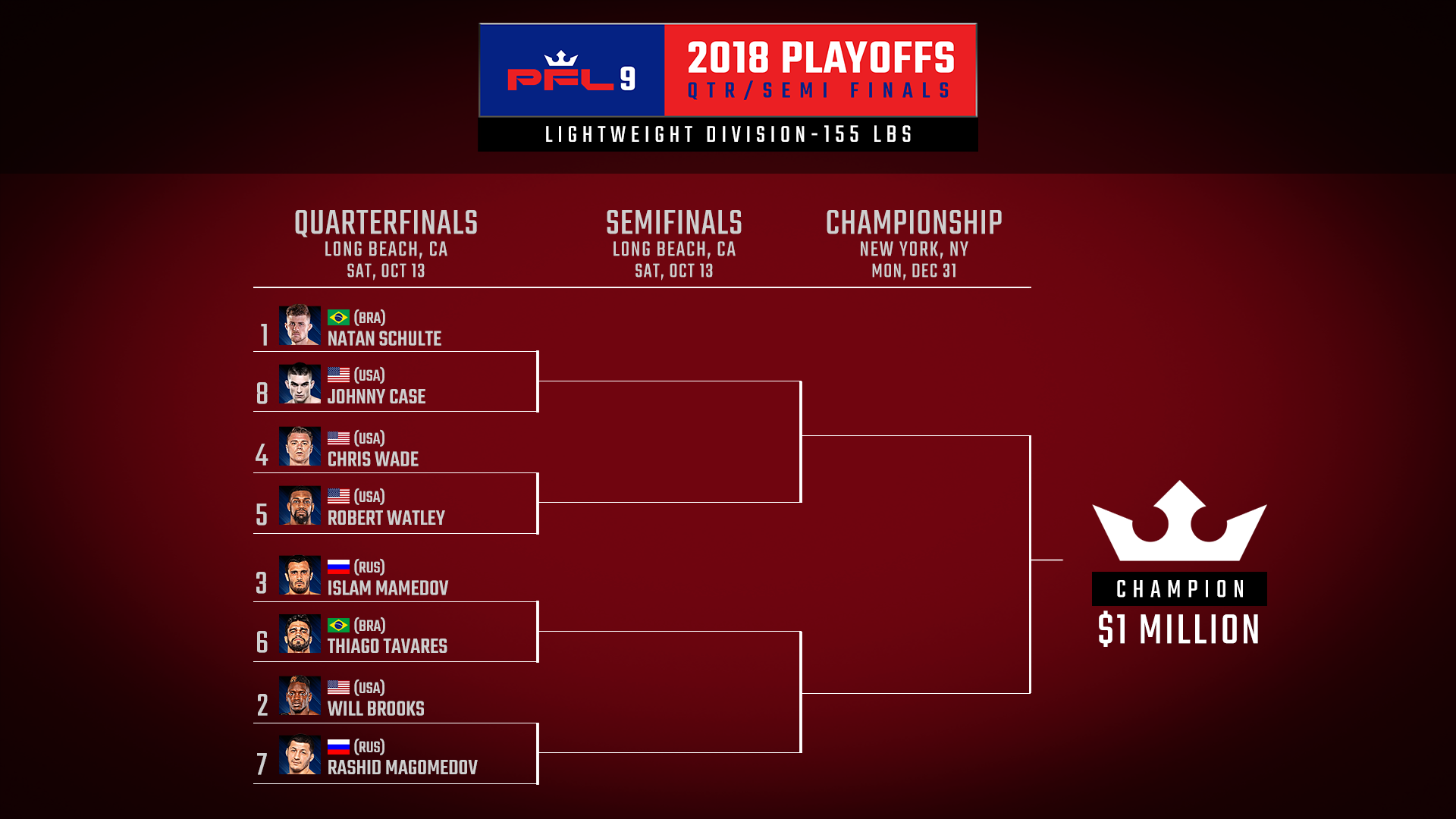