Roman’s journey into mixed martial arts coverage dates back to approximately 2007 when he was writing for the Miami Herald.  He realized that not many newspaper outlets were covering MMA action, so when pro wrestling sensation Bobby Lashley was transitioning to the sport at a regional show in Florida, Roman took action.

“I didn’t tell my editor,” Roman said.  “I just went in there, this is back when you had press credentials.  I showed my badge, I got in. Ricco Rodriguez (former UFC heavyweight champ) was headlining the card.  I just really wanted to interview Lashley about his transition from pro wrestling to MMA.  I wrote the interview, and sent it to my editor.  He was a little pissed off, but at the same time he was grateful.  He said something like ‘next time tell me in advance, we can’t be doing this.’  But, they ran the story.”

Roman kept in contact with many of the regional promotions in South Florida, eventually earning himself a spot as paid talent, interviewing fighters.  He was taking photographs and doing social media when one night he finally earned his break.  The promotion he was working with needed someone to do post-fight interviews.  The famed Jimmy Lennon Jr. was working as a ring announcer that night, a man Roman very much looked up to.

“I was like a kid in a candy store,” Roman said. “I was working right next to Jimmy.  I mean, right after Michael Buffer, he is it when it comes to boxing announcing.  He was giving me tips on announcing and interviews.”

One thing led to another and Roman did the interviews for about a year before transitioning to working as the ring announcer.  He expanded his roots and began working with multiple promotions…. and then out of no where, things kind of just flatlined.

That’s when Frank introduced Roman to Lex McMahon, Titan FC COO, and the rest is history.  He’s been the promotion’s ring announcer ever since.

“People recognize me now because of Titan FC and UFC Fight Pass,” Roman said. “I’m blessed.  I’m happy for it.  Last year I was at a bar in Japan and a guy came up to me and asked, “aren’t you the guy from Titan?’  That shows how big Titan is.  It’s not regional, it’s worldwide.  For me, a ring announcer, to be recognized in Japan, that’s huge.”

Most every famed ring announcer has their own call sign or saying that they are recognized for.  The most famous in MMA of course if Bruce Buffer’s “It’s Time!”   When asked what separates Roman from the others he said:

“Don’t copy anyone, just be you.  I love what Bruce Buffer does with his energy, but I also love Michael Williams of Bellator MMA. He is very smooth.  He doesn’t scream, or yell.  He doesn’t jump.  I’m a very energetic person.  My tone goes up and goes down.  I’m a big fan of heavy metal, but I don’t have a deep voice.  I don’t have growl.  I’m a big fan of 80’s rock, Twisted Sister, Motley Crue.  If you remember, they always had a high pitch scream ‘ahhhhhhh.’ I said, I don’t have this deep voice but I can definitely do the high pitch so if you know what I do is, I raise the mic and I say, ‘Get up and get LOUUUUUUUUDDD!’  I do the high pitch.  I can’t growl and I have bad genes and have a bald spot so that’s how people recognize me.  That’s my gimmick if you will.” 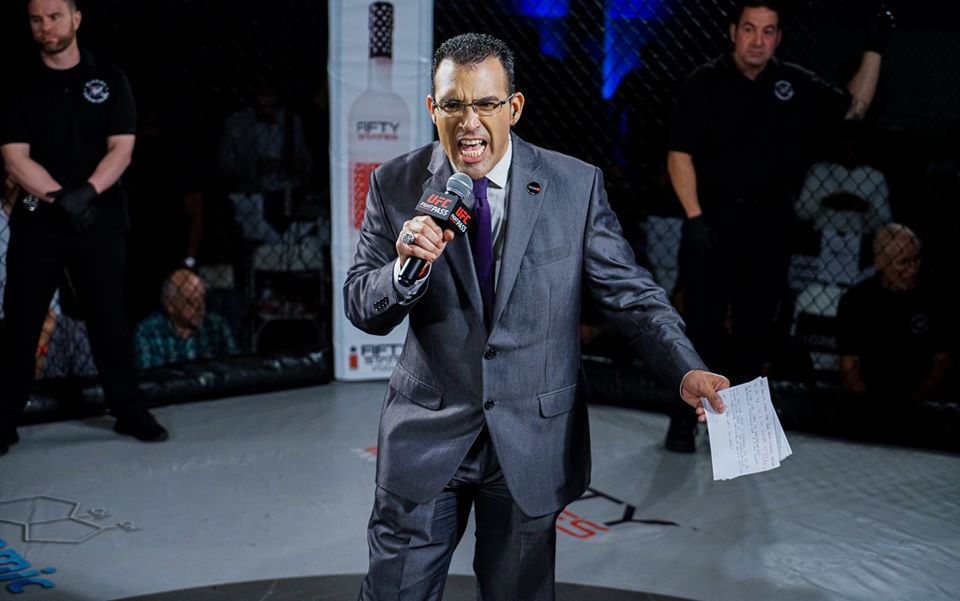 You mentioned going to see Guns N’ Roses live.  What is the best Guns N’ Roses song?:   “November Rain.  The solo from Slash is friggin’ amazing.  The video is so cool with the wedding and you see Slash in the middle of the desert.  Now mind you, I’m not a huge Guns N’ Roses fan.  I actually like more of the metal-core.  I’m a big fan of Killswitch Engage. I’m a huge Howard Jones fan, the second coming of Killswitch.  Jesse (Leach) did a great job too, he’s the original member.  But I just love Howard, his voice is amazing.  I do have to give props to Jesse though, this last album was amazing.”

How did you get into pro wrestling?:  “I’m 5’8″.  I’m not a big, tall guy.  I realize that.  Even when I played football in high school, they always put me in the center and it never made sense to me.  I would travel to Nicaragua, my grandfather’s home country.  There wasn’t much to do as a kid.  There was this Mexican pro-wrestling and he would show me all the legends.  We would sit there and watch, it would be like our pastime.  We would watch some good old fashion Mexican Lucha Libre.  But I didn’t know about it back in the States.  Then I would come to learn about WWE, WWF at the time, and Hulk Hogan.  I began a fan because of the athleticism and the charisma.  The show was so entertaining, but at the time you didn’t see what you see now.  You didn’t have a Daniel Bryan who is 5’8″ taking on Braun Strowman who is huge.  Back then everyone was huge, Hogan, Andre the Giant, Big John Stud, King Kong Bundy, Bam Bam Bigelow.  This is what sold.  So guys like me that were 180 pounds, they pushed aside, unless you were a Luchador.  They were fast and high flying, Rey Mysterio was young at the time.  The Guerreros.  That started making its way to WCW and WWE, especially WCW, pushing their cruiserweights.  I became an amateur wrestler.  I had to gain weight, not cut weight, gain weight.  I would have to drink a gallon of water just to weigh in.  My friend had a backyard wrestling group, and I started doing that.  We came up with names.  Now if you remember in WWE, there was a porn star character named Val Venis.  I did my character like that.  Mine was Fabulous Richard Hard.  The character was a pretty boy but a whiner.  We did a show and I was so hated that people would spit on me and throw food at me.  Sometimes I didn’t even have to speak, I would just come out with a girl and people hated me.”

Roman said that he would work out at a Gold’s Gym with many of the WWE Superstars but that his favorite personality and inspiration to this day was Dwayne Johnson, ‘The Rock.’

“He was the nicest guy and I remember he would always gives us tips.  I’ll never forget this conversation.  I was in the locker room and I was about 16 or 17 years old.  I was nervous but I said, ‘Hey Rock, can I ask you a question?’  He said ‘sure.’ I said ‘Rock, I want to be a pro wrestler but I don’t have the size.  I don’t have the build.’   He said, ‘well, what’s your background?’  I said, ‘TV, wrestling, announcing.’  He said, ‘Focus on that.  If the wrestling doesn’t work out for whatever reason, you have something to fall back on.  That’s what happened to me.  I wanted to be a football player but I got hurt.  I had wrestling in my family, and that was my backup plan.’  But every time I saw him at the gym he kept asking me how things were going and always kept me focused.  I kept wrestling, made a couple of bucks, but then hurt my back.  I took some heavy hits.  I landed on concrete and it came to an end.”

Following the career ending injury, Roman set his sights on learning jiu jitsu and Muay Thai, eventually competing in his first fight at 37-years of age.

“It went well… I lost, but it went well,” Roman said.  The guy I fought, ended up doing an MMA fight a few months later, one that I was the announcer for, and he won…. so I didn’t feel bad about my loss at all.”

The last thing I touched on while speaking to Roman was the booking of Titan FC welterweight champion Michael Graves and interim champion Kamal Magomedov.  The fight had been scheduled several times before, very much like the Khabib Nurmagomedov and Tony Ferguson matchup.  Through no fault of their own, the fighters have had to reschedule several time due to visa issues or injuries.  The contest was set to take place at Titan FC 60 on April 24 in the Dominican Republic, but just like Khabib and Tony, the current coronavirus pandemic has changed the ways things were scheduled to pan out.

“Graves has that resume,” Roman said.  “It’s unfortunate that these things happen.  Not to take anything from Magomedov, but I see Graves coming out on top with a good strategic plan.  It’s a fight that I would love to see.  One thing I love about Titan FC is you see fighters from all over the world.  It’s tough for me to announce some of these names, but man we get to see some great fighters.  Some of these fighters from Kazakhstan and Russia have a ton of heart.  I see Graves having to take the fight to him and going the distance, but it is such a great matchup and I really do hope we get to see it.”

Where would you love to call a fight, what part of the globe? “I am dying for us to get a fighter from Japan on the card because I speak a little Japanese, so I can say something in Japanese.  Right now when we have Spanish fighters I add a little Spanish flavor into saying their names.  One of my dreams is to announce in Japan.  Announcing in Tokyo.”

Is there anyone you want to meet in this sport, anyone you look up to?  “I would love to meet Lenne Hardt (famed voice of Pride Fighting Championships).