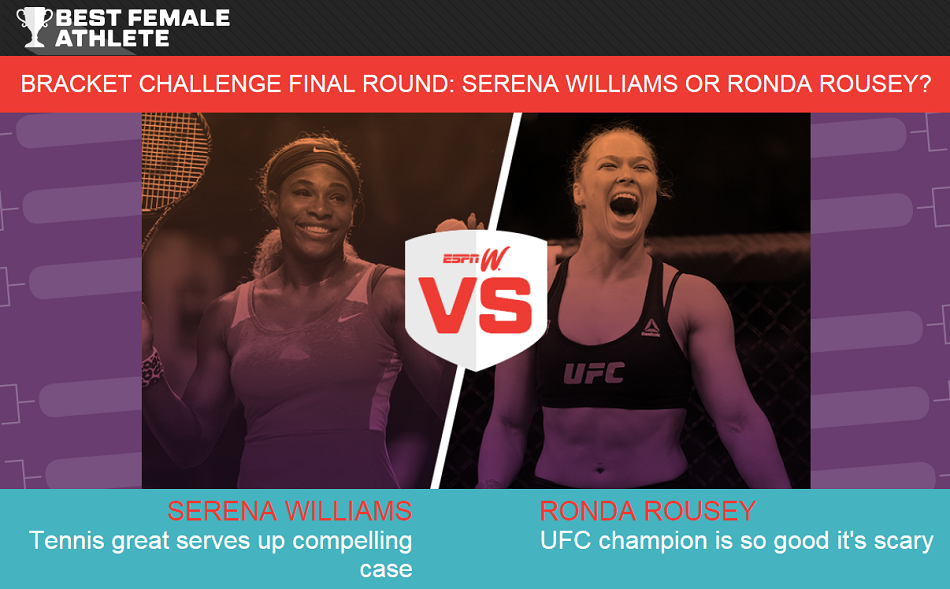 Only two remain in the espnW “Best Female Athlete” poll.  Serena Williams who is an American professional tennis player, ranked No. 1 in women’s singles tennis.  The other, UFC women’s bantamweight champion, Ronda Rousey.

Here’s how they did throughout the bracket. 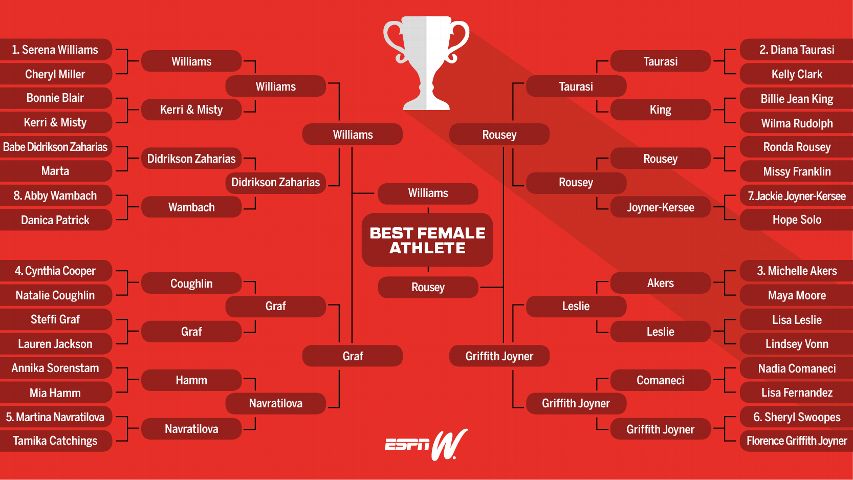 Let’s break it down.

Round 1: Serena Williams (86 percent of the vote) def. Cheryl Miller

Like every point in tennis, it starts with the serve for Serena Williams.

“The one thing all observers seem to agree upon, and the most inarguable element in her statistical record, is the superiority of that serve,” ESPN tennis expert Peter Bodo said. “It’s an open-and-shut case. Williams has the best and most effective serve ever seen in women’s tennis.”

Add all that up and pretty soon it’s clear why she has as many Grand Slam singles titles (21) as all other active players in the WTA combined, a run that started when she received a congratulatory phone call from Bill Clinton after winning the 1999 US Open at age 17 and continued at this year’s Wimbledon when, at 33, she became the oldest woman to win a major title.

Having just won four straight majors for the second time in her career, Williams is now trying to win every major in a calendar year for the first time since Steffi Graf did it in 1988. A win at the US Open — a title that would also tie her with Graf for most Grand Slam titles in the Open era — could very well be the closing argument in Williams’ case for best female athlete of all time.

1. Has as many Grand Slam titles (21) as all other active women’s players combined

2. The only player in the Open era to have at least 50 wins in each of the four Grand Slams

Round 1: Ronda Rousey (63 percent of the vote) def. Missy Franklin

Ronda Rousey’s armbar may be the most potent tool in fighting history.

Of Rousey’s 12 fights, eight have ended in the first round via an armbar submission.

Her past three title fights have lasted just 64 seconds — including a 14-second takedown of Cat Zingano at UFC 184 in February that was the shortest match ever in UFC championship competition.

UFC’s first women’s bantamweight champion, Rousey has five title defenses in MMA’s premier league and has been pushed to the third round only one time.

Her dominance was acknowledged at the 2015 ESPYs, when she won Best Female Athlete over Serena Williams and Best Fighter over Floyd Mayweather.

With her popularity and success, Rousey has also brought women’s MMA into the mainstream and expanded the possibilities for female fighters.

“I’m notorious for saying that women would never fight in the UFC. Then I met Ronda Rousey,” UFC president Dana White said on the Nine for IX documentary “Rowdy Ronda Rousey.” “Her personality, her fighting style, her tenacity. I knew that she was the one.”

Rousey was a 2008 Olympic bronze medalist in judo, as well as the 2007 world silver medalist and 2007 Pan Am Games champion.

By John Eric Poli 19 mins ago

By Lenny March 7 hours ago