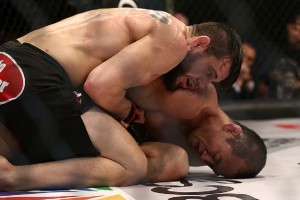 The event was headlined by former UFC title challengers Jon Fitch and Yushin Okami, in which Fitch edged out a decision victory.

If you want to blame the fighters it is a tough argument because they went up against a very stacked night in sports.

The New York Mets vs. Chicago Cubs baseball playoff game on TBS did 7,891,000 viewers. A Florida vs. LSU college football game did 6,777,000 viewers on ESPN. There was also a boxing pay-per-view card from Madison Square Garden in New York, headlined by Gennady Golovkin vs. David Lemieux.

By Mike Pendleton 43 mins ago