MMA might be one of the toughest and scariest of all the fighting disciplines. That’s why most of us prefer to stay at home and watch from the safety and comfort of our sofa than get in the ring and take on another fighter. But there are other ways to take part in the action without risking a broken jaw or two black eyes. Since the very first boxing and martial arts bouts were witnessed on the Atari in the 80s, this fighting genre of computer games has always been amongst the most popular.

So for those who fancy a scrap without getting hurt, here are five of the best fighting games available right now, including two top MMA games that are sure to get your blood pumping.

One of the most popular fighting games of all time, 2012’s UFC Undisputed 3 feels more real and more thrilling than pretty much any game that came before or since. It can be played on Xbox and Playstation and includes features like Title Mode and Title Defence as well as the satisfying ‘finish the fight’ where the ref literally has to pull your fighter off your opponent. The head stomping is bruising just to watch, and the career mode is an awesome way to get immersed in UFC for months at a time to bring your fighter up to top level. Unbeatable stuff!

A brilliant game for true MMA fans as it features the full roster of the very best MMA fighters around, including Conor McGregor and Ronda Rousey. Like the real deal, a journey into the Ocagon in UFC2 will be a bloody affair with the promise of plenty of head-breaking punching and kicking. Perhaps the most impressive feature of this game is the sheer realism of the noise from the ring and from the spectators. This one feels like the real deal that is for sure.

One of the best known fighting games of all time, Mortal Combat has been re-made on a number of occasions by NetherRelam. In each instance the blood and thunder fighting will always remain the main attraction for most players, whilst the addition of new modes and attack methods always add new dimensions and give you something new to master. If you’re in, prepare yourself for some seriously supernatural power fights and some extremely gory demises. 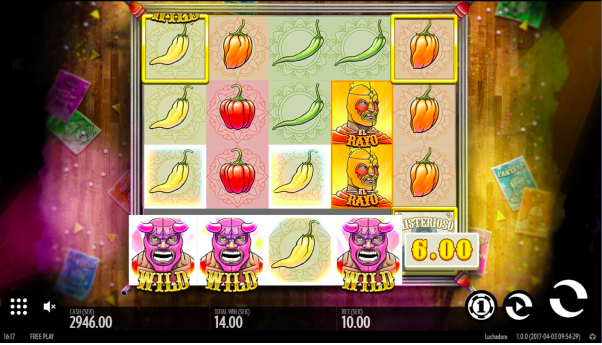 Alongside all these traditional fighting games its worth browsing through something a little bit different. The video slots industry thrives on taking cues from various cultural touchpoints – from music and films to sport. And into that mix comes Lucha Wrestling, the crazy Mexican style of wrestling where all the fighters where colourful masks. One of the best examples of this is from Scandanavian developer, Thunderkick. It’s called Luchadora. The game displays beautiful graphics and uses the four corners of the five reels to affect where normal symbols turn into wilds giving more chance of wins. There are Mexican wrestler characters, free spins and multipliers, but no real fighting! Just the chance to win real cash prizes!

Next to Mortal Combat, Street Fighter is one of the big evergreen names in fighting games. Its longevity is helped in part by updated versions of the game that always come with new features, better graphics and new challenges to overcome. Street Fighter II was one of THE best of all time but the game designers added one feature to III to make it even better – the ‘parry’ move where a player could turn a fight on its head by moving into an attack from an opponent rather than away from it. Risky, but a hell of a way to win a fight. All this, plus in our opinion a stunning soundtrack, make this one of the great fighting games of all time.