Cub Swanson has been in the UFC’s featherweight division since it came about in late 2010, as he was part of the WEC‘s roster for over three years before they ended up merging.

Swanson was a top five featherweight for years and years, and didn’t break out of the top ten until about three years ago. He ran into a bit of a rough patch from the end of 2017 to the middle of 2019 however, losing four-straight for the first time in his career. 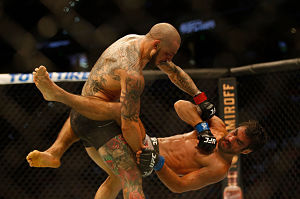 Swanson came back to secure his first victory in two-and-a-half years, defeating Kron Gracie via unanimous decision. That was in October of last year, we didn’t really know what to expect from him coming into his fight with Daniel Pineda.

Pineda had just returned to the UFC in August with a second-round TKO victory over Herbert Burns, who was 2-0 in the UFC with two spectacular finishes over very skilled opponents.

Pineda had also made to the finals in PFL with two first-round finishes over very skilled opposition, but failed his drug test, the wins were overturned, and he was eventually released. 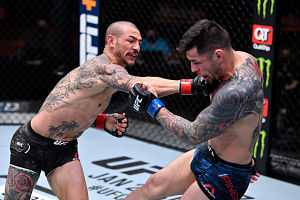 He surely didn’t make it easy on Swanson either. Those leg kicks Swanson was eating right out of the gate, they were absolutely nasty, and there were certainly a lot of them. Swanson found his target more often than not with his punches however, and nearly knocked Pineda out at the end of round one.

Swanson picked up right where he left off at the end of the first, and ended up securing the KO victory at 1:52 of round two. This was a beautiful thing to see because well, for one, Pineda, though not many know him, started fighting around the time Swanson started competing for the WEC in 2007. 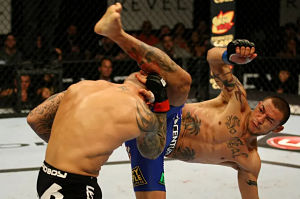 Pineda’s a veteran, he’s very crafty, and he has a lot of skill in every area of fighting. Not to mention, Swanson hasn’t knocked anyone out since 2013, and that’s all he used to do to his opponents.

Many of us were thinking it may be time for him to rematch Jose Aldo, but he lost his main event bout to former UFC Lightweight Champion Frankie Edgar via submission (neck crank) at 4:56 of round five, and lost his right to challenge for the belt. 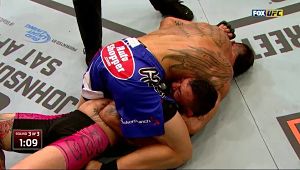 Edgar dominated him throughout the bout too, it wasn’t close. Swanson was then matched up with the surging Max Holloway, which was Holloway’s first really big name fight, and he was also out-classed and finished (guillotine choke) in that fight as well, this time making it to 3:58 of round three.

None of us knew quite how great Max Holloway was at that time, but Swanson was now coming off two defeats via finish, after starting out his UFC career at 6-1 on a six-fight win streak. 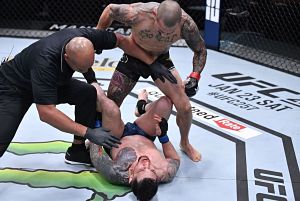 He was finally back to his winning ways after he defeated Kron Gracie, but he still didn’t have that trademark Cub Swanson finish. The featherweight veteran was able to in his last fight with Daniel Pineda, and it was incredible to watch.

Swanson has always had some pretty elite boxing, having Timothy Bradley as one of his main training and sparring partners for some time. He’s also added some really creative kicks to it, he’s always been a lot of fun to watch, and he’s always been effective with his striking.

It just appeared for a little while there that the 37-year-old longtime veteran’s best days were behind him. While that’s still true, he’ll never have his youth again, he’s found a way to be effective again into his later 30’s.

It’s very exciting to see, we don’t have many WEC veterans left. It’s awesome to see they still got it, and against good competition.

Who would you like to see Cub Swanson face next?