Aaron Meisner is a self appointed military brat who was born overseas.  His father retired while at Ft. Dix, N.J., and Aaron wandered from Pemberton to South Philly 15 years ago and hasn’t left since.

He’s been a personal trainer for years but along the way, has added a long illustrious list of names to his resume.  Meisner has learned from some of the best and taken that and trained some of the best that the city has to offer in it’s rich tradition of mixed martial arts. 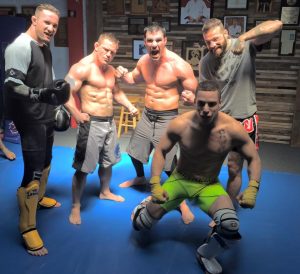 Meisner first started training Muay Thai under the legend, Kru Rigel Balsamico, who got him on his path. He also worked out at Daddis. When he was making the transition to mixed martial arts, he found Balance Studios with Ricardo and Phil Migliarese.

He learned where and how to train from the brothers and they made him feel like it was a home. Mesiner says “it still is home to this day.”

The Migliarese brothers enabled him to seek out additional help and would spar with different gyms nightly at Fight Factory.  During the final two years of his pro fighting career (6-3), he started to train with Eric Karner at Nak Muay. Meisner credits Karner with helping his game really evolve and taking it to a new height as well as showing him how to be a good teammate.

Meisner has adapted Karner’s style of bringing fun and enjoyment to training, moving forward on his own for the first time with Royal StriKing.

Meisner has worked with some of the best up and coming fighters in the Philadelphia region. He’s good friends with exciting UFC lightweight Paul “the Irish Dragon” Felder.

He’s worked Paul’s corner numerous times in the UFC and even before the Dragon made the big stage, Meisner was helping and cornering him.

He also has a few highly touted amateur fighters under his wing in Jack Hartenstein and Trent Stump.

Royal StriKing is located at 910 Emily Street right in South Philadelphia. It’s Aaron’s first venture on his own. It’s just a matter of time until this new facility explodes.

Royal StriKing will operate with a Muay Thai base but bring an MMA themed Muay Thai which he says is not offered anywhere else.

Kick-boxing, overall fitness and personal training will also be available.  Brazilian jiu-jitsu classes are also in the future plans.

This Saturday December 17, Royal StriKing will be offering a FREE Muay Thai workshop from 12-2 pm. Click link below for more info.

For a limited time Aaron Meisner and Royal StriKing will be hosting FREE muay thai workshops. Come in and learn the art of 8 limbs. It’ll honestly change your life. It’s the perfect way to learn self defense and is an amazing workout!!! It’s also a chance to check out the newest Philadelphia muay thai training facility.