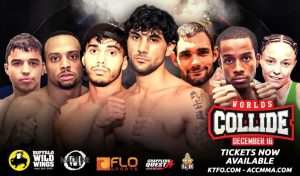 Weigh-ins took place Thursday evening, in the same venue as the ACC & KTFO event, The Space at Westbury. All of the fighters stepped on the scale at 5 p.m. The United States Muay Thai Association (U.S.M.T.A.) is the official sanctioning body of World’s Collide. U.S.M.T.A. is the first third-party sanctioning body to receive a license in the State of New York, to oversee an official MMA event.

Jillian DeCoursey and Lindsey VanZandt will be headlining the largest amateur event in New York State. In the co-main event, Dan Coleman of Striking 101 will be battling Long Island MMA’s Eric Ott. There are 15 bouts lined up for Friday night, including six title fights.

Be sure to stay tuned for fighter interviews tomorrow night before the fights begin.

The event takes place Friday, December 16, 2016. Doors swing open at 6 p.m. and fights are expected to begin promptly at 8 p.m. Tickets can be purchased at www.KTFO.com and www.ACCMMA.com.

By Adam Martin 22 seconds ago