The UFC Featherweight Championship will be on the line when Alexander Volkanovski seeks to defend his title against Brian Ortega in the main event.

In this highlighted play by play we will be featuring Alexander Volkanovski vs. Brian Ortega for the featherweight championship.

Before we get to the fight. lets talk about the champion and contender.

Volkanovski, is coming into this fight of the back of beating Max Holloway back to back. The Australian is on a 19 fight win streak and looks to make the second defence of his featherweight championship.

Oretga, bounced back impressively against “The Korean Zombie” Chan Sung Jung. The Brazilian Jiu-Jitsu black belt under Rener Gracie looks to capitalise on his second attempt at UFC gold. 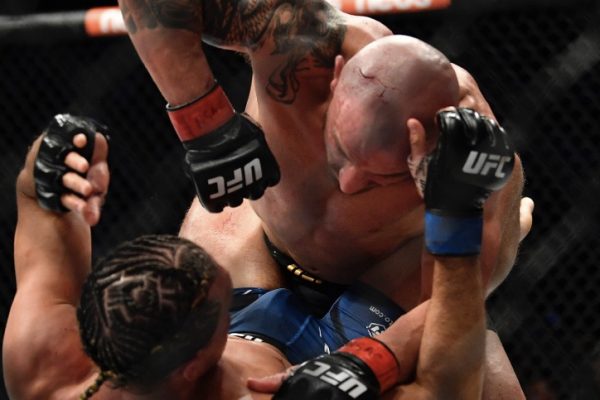 Alexander Volkanovski vs. Brian Ortega round by round:

HERE WE GO! Inside leg kick from Volkanovski early. Both men bring very patient. Volkanovski and Ortega trade jabs. Ortega lands a stinging right hand that momentarily buckles the knees of Volkanovski. Volkanovski lands a right hand of his own as Ortega tries to close the distance – followed up with a jab. Volkanovski starting to get more busy as the minutes pass. A cut has opened on the cheek of Volkanovski. With a minute left the champ starts to puke on the pressure – Ortega counters with a punch and unsettled the balance of Volkanovski. And that’s the end of the first round!

A sign of respect as they touch gloves to start the round. Volkanovski continuing with the heavy pressure. The champion lands a couple leg kicks. A right hand counter lands and now Ortega is on his bike, the commentators announce it was a head clash that stunned Ortega. Ortega settles down and lands a combination of his own. Right left from the Aussie lands clean. Ortega catches Volkanovski kick and immediately jumps on a deep guillotine. Volkanovski face is turning PURPLE! HE SLIPS OUT, Ortega is looking for a farce and the champion reverses the position and ends in full guard – Ortega throws up a TRIANGLE AND ITS DEEP, Volkanovski in bad trouble and he scrambles to full guard again. Volkanovski ends the round on top punishing Ortega. WHAT. A. ROUND.

Championship rounds are here. Volkanovski is right back in the face of Ortega. A left hook lands over the top from Volkanovski. Ortega gets the clinch and gets Volkanovski to the mat and immediately again looks for the guillotine then transitions into a D’ARCE! Volkanovski remains calm and gets the scramble again. Fantastic work from the champ. Volkanovski is in full guard and has no time to settle – Ortega throwing up submissions left right and center. Volkanovski Is stacked and raining down blows. This could be the end. Ortega ROLLS and survives for the meantime. ABSOLUTELY PHENOMENAL FIGHT. Big shots again from Volkanovski in the stacked guard. Volkanovski stands up and requests Ortega to get to his feet – they end the round cliched against the fence.

FIFTH AND FINAL ROUND. Ortega looks for a trip, the challenger is looking fatigued. Ortega lands a one two – followed up with a fantastic combination again. Two and a half minutes left in the round. Volkanovski lands a right over the top and a body shot. Ortega lands a right on the chin. Ortega has seem to caught a second wind here. Both men are still working, throwing combinations. Battle of the jabs. Ortega looks for a flying knee but nothing home. The crowd applause for the final 30 seconds, Ortega pours on the pressure in the last 10 seconds and he wobbles the champ, backing him up with punches. The bell goes! What a fantastic fight.