The hype was built for one of the greatest comebacks in sports history.  Former UFC women’s bantamweight champion Ronda Rousey returned for the first time since being knocked out by Holly Holm at UFC 193 in November 2015. 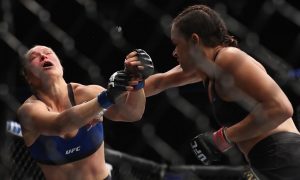 Tonight, the former champ took on current champ Amanda Nunes and it did not go well at all.  From the get go, the former bantamweight queen Rousey was clipped and stunned, and Nunes followed up with more shots, bloodying Rousey, and TKO’ing her in just 48 seconds.  The fight was over began it really even ever began.

Was she in the fight mentally?  Did she ever overcome that loss to Holly Holm at UFC 193 in Australia?  Was she still having suicidal thoughts?

Where Rousey goes from here is anyone’s guess but it sounds like she may be done with mixed martial arts after suffering her second career defeat in devastating fashion.

In the co-main event bantamweight champion Dominick Cruz relinquished his title to hard-hitting Cody Garbrandt in a fight where Garbrant outmoved and outpointed the master of point fighting.

It was a back and forth five round battle where the challenger surprised many who thought he only had a puncher’s chance.