She will have spent roughly 10 months away from the cage when rising Invicta Fighting Championship’s star Andrea KGB Lee (4-2) returns to action January 14 at Invicta FC 21. 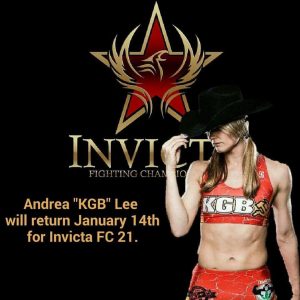 The 27-year old flyweight phenom was suspended nine months back in May after testing positive for a pair of diuretics after her fight with Sarah D’Alelio at Invicta FC 16 in March.  Her opponent has not yet officially been announced but Lee promises that no matter who it she fights, they are going to be in for a rude awakening.

Upon announcing her return to action, Lee spoke with MyMMANews to discuss the time off and where her training has taken her.

“I worked so hard on my Jiu-Jitsu this year. I feel like my wrestling and Jiu-Jitsu improved more in the last ten months than it did in the last three years,” Lee said.

“Stuff is just making sense. I competed in 14 Professional and Absolute level BJJ matches this year. Three were IBJJF world champions (1 blue, 1 purple and 1 brown), other than the blue belt world champion all others were purple and up. Most competitors were bigger than me. I went 14-0 in BJJ in 2016.

“That said my striking has been kept sharp by my head coach Donny Aaron. I plan to give the most violent display of my career this January.”

UFC Fight Pass is not the only place you can keep an eye on Andrea KGB Lee.  Lee and King of the Cage atomweight champion Andy Nguyen (3-3) have teamed up produce an incredible 2017 calendar that you have to get your hands on to believe. 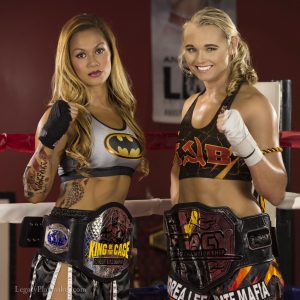 It’s hard to be away from my Bestie (Andy) during Christmas as she gets ready for Rizin in Japan, New Year’s Eve,” Lee said.

“She’ll fight in Japan and then she’ll fly to me in Kansas City for my return off my suspension. Excited about that fight,” Lee said.

“Meanwhile, Donny and I will be headed to Kansas City where I’m excited to unveil the new me.”

“Thanks to everyone who buys a calendar and continues to support me. I will make you proud this year.”

If you want to purchase the 2017 Andrea KGB Lee/Andy “CrAsian” Nguyen calendar contact either of the two on social media. Click links below.

Stay tuned. Andrea will be on the SFLC Podcast this coming Wednesday night to talk about the fight, the calendar, and more.