As the calendar turned to 2019 and many were making resolutions, Andy Nguyen was busy creating a plan that will find her quite busy in her fighting career this year. Nguyen, who was the Helwani Nose winner for ‘Walkout Of the Year ‘with her “Smooth Criminal” entrance before her fight at RIZIN 13, will start this year off with a fight at X1 World Events 51.

My 2018 Helwani Nose Awards Walkout of the Year is @AndyTheCrAsian1‘s smooth dance to the ring at RIZIN.13

Join us LIVE right now on ESPN2 as we hand out the rest of this year’s awards.

Nguyen is scheduled to face Tiani Valle at X1 World Events 51, which will take place on Saturday, January 19 at the Blaisdell Arena in Hawaii. In an interview with MyMMANews.com, Nguyen discussed her upcoming fight, plans for 2019, and more. Not only when Nguyen get the opportunity to step back into the cage and fight, but she’ll get the opportunity to visit Hawaii for the first time as well. 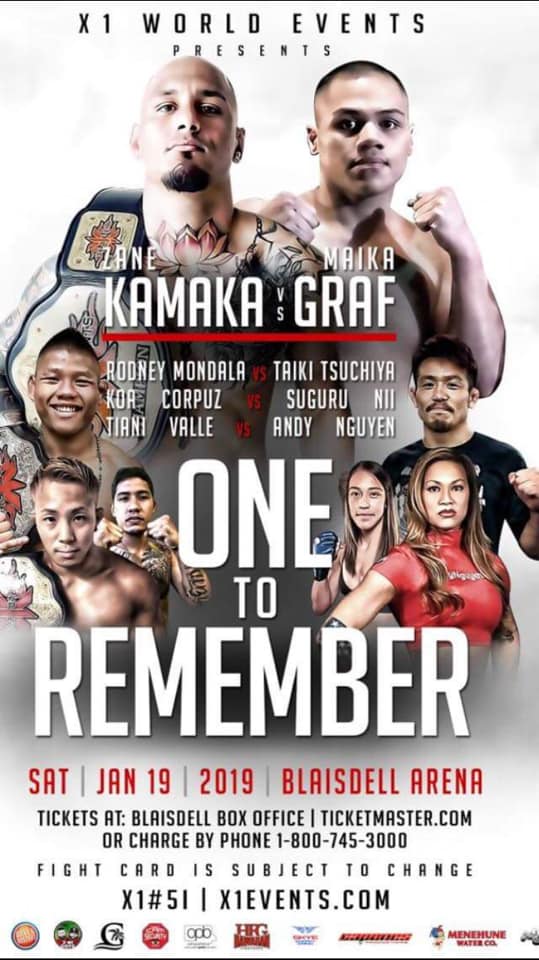 “I’ve never been to Hawaii, I look like a Hawaiian but I’m from the South. I’m excited, Tiani Valle is a very young girl who went up against Kerri Melendez in Bellator, so she’s a Bellator vet. I’m just excited to take this fight over there. I want to win to square off my record at 7-7 and then start up my Muay Thai journey. I signed with Lion Fight, it’s an exclusive deal. They wanted five fights but I talked them down to three.”

“It’s not that I quit MMA, I just want to change it up. The UFC is not up opening the atomweight division any time soon. Lion Fight has also signed a deal with CBS sports, they’re already talking about schedules for the next couple of months and finding out what card I should be on.”

With a new journey coming up with Lion Fight, Nguyen is prepared to keep herself busy in 2019, eyeing at least three to four fights this year.

“I usually average about three to four fights a year, so we’ll see. If there are no injuries after the fight in Hawaii, we’re aiming for March.”

As she prepares herself for an eventual and busy 2019, Andy Nguyen doesn’t hide the fact that she did what she had to do when it came to her best friend Andrea “KGB” Lee who was allegedly a victim of domestic violence from her husband Donny Aaron last August. It was on the August night that Nguyen, picked up the phone and called the police in what was the right choice, but a choice that came with losses for her as well.

“I didn’t realize I was gonna lose a coach, Karate Mafia as a team, a family. We were all one. I just knew in my heart I had to call the cops.”

Sticking with her best friend and battling through the loss of a friend and a team that she called family, Nguyen says the toughness and sense of humor from Andrea Lee is ultimately makes their bond so strong. Even through the hard times with personal situations, Nguyen and Lee never ran and hid from fans, and turned the negative into a positive.

“Andrea’s got a great sense of humor and we just get by it. We’ve both been in tough situations and we’re like alright, whatever. As far as our connections to the fans, we know it’s not going to last forever. These are the moments that we cherish and be humble. It’s so neat to meet people who are so excited and want to take pictures with you.”

Coming into a new calendar year usually calls for resolutions but for Nguyen, there’s no resolutions, just hopes for success in 2019.

“I want my Mom’s beef jerky business to go up another level because it’s really good. I want to do well in Muay Thai, and that’s about it so far.”

Doing what she has to do, with her best friend Andrea “KGB” Lee by her side, Andy Nguyen is set on welcoming new challenges in 2019. It will start with her first trip to Hawaii as she looks to improve her MMA record to 7-7, then it’s off to Lion Fight where she’ll have an opportunity to get her Muay Thai career off to a good start and doing so with CBS Sports behind her. Just like KGB, Andy Nguyen doesn’t shy away from tough situations, she laughs them off, does what she has to do, and presses forward.