On December 13, 2016, UFC strawweight Angela Hill was re-enrolled by USADA into the UFC Anti-Doping Policy Registered Testing Pool (RTP). Hill had previously been part of the RTP as a contracted athlete in 2015, before she was released at the discretion of UFC and subsequently removed from the program. UFC is granting Hill an exemption to the four-month RTP requirement, which will allow her to compete against Jessica Andrade on February 4, 2017, in Houston, Texas. 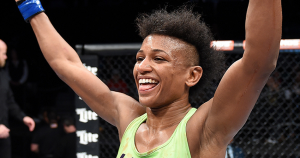 Under the UFC Anti-Doping Policy section 5.7.1, in exceptional circumstances or where the strict application of that rule would be manifestly unfair to an athlete, UFC can grant a waiver to the four-month requirement. UFC determined that Hill met that criteria for the following reasons:

Bob Arum disagrees with Dana White going on with UFC 249

Youssef Zalal: Checking in with “The Moroccan Devil”