In today’s social media heavy environment often times fighters will use Twitter to not only call fighters out but also produce some of the best trash talk that 140 characters will allow.

Angela Magana and Bec Rawlings are no strangers to this.  The TUF 20 veterans were very vocal of several of the ladies in the house during the airing of their season of the Ultimate Fighter, but their talk did not stop there.

Rawlings will fight Lisa Ellis who stepped in as a replacement for Seo Hee Ham who was injured.

Magana and Rawlings are what you might refer to as “besties” if you were online.  The two ladies stick by one another like peanut butter and jelly.

When Ellis went to Twitter to make a statement about her opponent, the two ladies saw the opening and took the jab and what resulted is some pretty nasty trash talk that will only continue to escalate.

Ellis’ comments stems from Rawlings temporarily moving from Australia to California where she is training for her upcoming bout.  Rawlings, an Australian native is temporarily separated from her children while she is in camp.

The bout is scheduled for May 10 in Adelaide, Australia where Rawlings will have support of her native country. 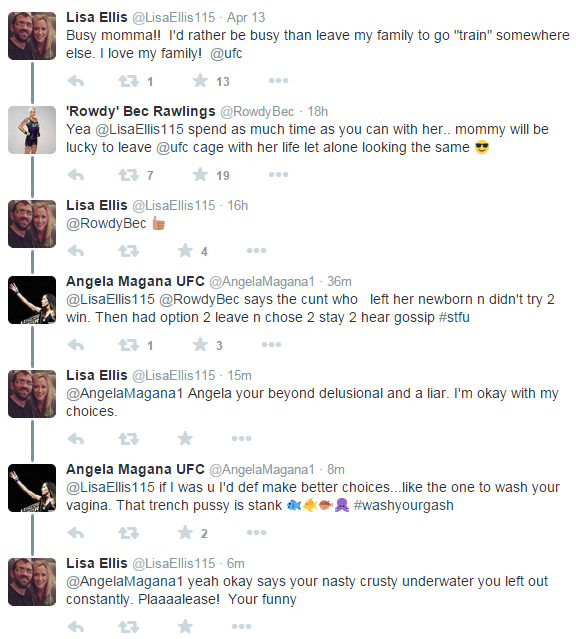