Bellator 165 from the SAP Center in San Jose, California was headlined by an intriguing lightweight title bout between defending champion Mi 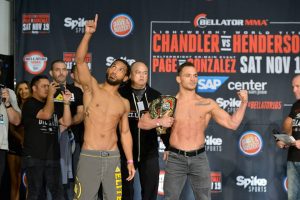 WOW!!!!  What a war this fight was.  Simply amazing. These two guys went at each other bell to bell.

In the co-main event, the surging Michael Page took on Fernando Gonzalez and won a split decision in a not so decisive fashion.

Also, top light heavyweights Francis Carmont and Linton Vassell, as well as the MMA debut of Keri-Anne Melendez, and the pro MMA debut of Baby Slice, son of the late great Kimbo Slice.

Slice seemed to be doing well before making one wrong move and being forced to tap from a guillotine in the second round.  He moves to 0-1 as a pro, but also didn’t have much experience has an amateur either with only one fight there before being signed to Bellator MMA.

Melendez, the wife of UFC star Gilbert Melendez, won her MMA debut in just 47 seconds via knockout over Sheila Padilla.