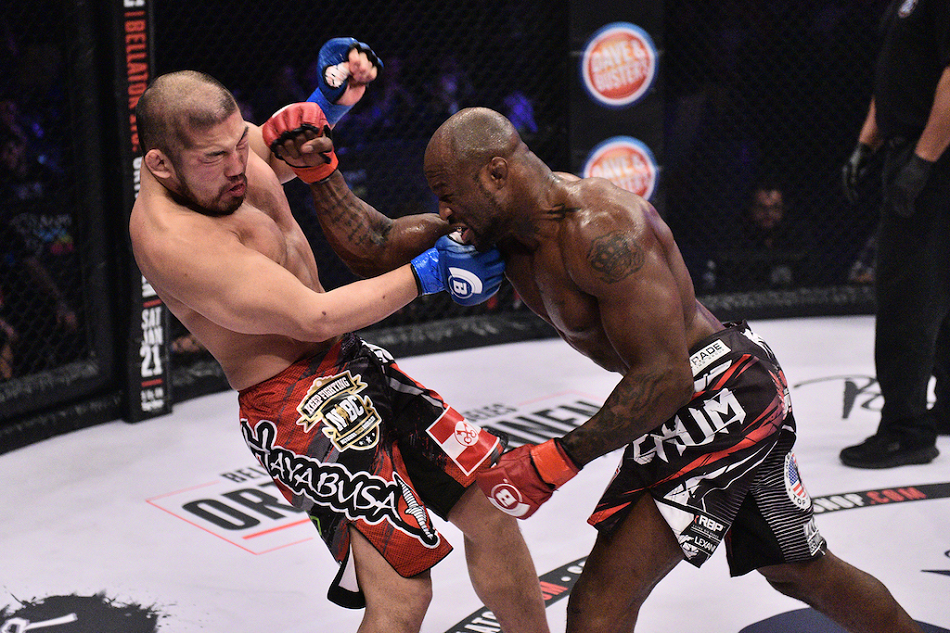 DUBLIN, IRELAND. (Dec. 16, 2016) – In the evening’s main event, it was wrestler versus judo practitioner as Muhammed “King Mo” Lawal (20-5, 1 NC) returned to moneyweight to face Olympic Gold Medalist Satoshi Ishii (14-7-1). King Mo avoided Ishii’s crafty throws as he scored a couple takedowns of his own throughout the fight. The contest finished with a shutout unanimous decision victory (30-27, 30-27, 30-27) for “King Mo.”

Now, after yet another impressive performance during the main event of “Bellator 169,” Lawal looks to end 2016 in style by repeating his domination over Rizin Fighting Federation opponents, when the 2015 eight-man Rizin heavyweight tournament winner returns to grand prix action during the Japanese-based promotion’s New Year’s Eve weekend of events.

Fresh off his victory in Dublin tonight, Lawal now sets his sights on the fellow contestants competing in the quarterfinals of the open-weight grand prix on Dec. 29 at Saitama Super Arena in Saitama, Japan – the semifinals and finals are set for Dec. 31.

With a second tournament victory in Japan, “King Mo” would cap off a stellar 2016 campaign, a 365-day run where in addition to Ishii, the American Top Team standout took current Bellator MMA Light Heavyweight Champion Phil Davis to the limit during their “Bellator 154” tussle back in May. 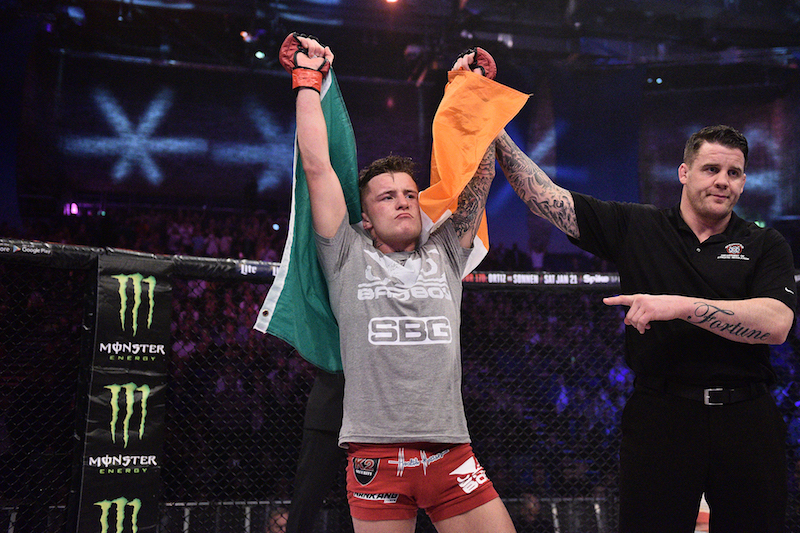 Gallagher Sinks in RNC During Third Frame of Co-Main Event

In what many considered “the people’s main event,” the highly touted SBG prospect James Gallagher (5-0) kept his composure through the first two hard fought rounds against Anthony Taylor (1-2). The American threw several powerful strikes, connecting on multiple occasions as Gallagher fought from safe range. Not long after the start of the final round the “Strabanimal” took the back of “Pretty Boy” Taylor with a body triangle actively looking to find a choke. It looked as though Taylor had it under control, walking across the cage toward his corner, pandering to the camera with a smile but seconds later, he was on his stomach, where he succumbed to a rear naked choke at 1:52 of round three. At the time of the stoppage, the judges were split with the cards reading 20-18, 18-20 and 19-19 after the first two rounds. 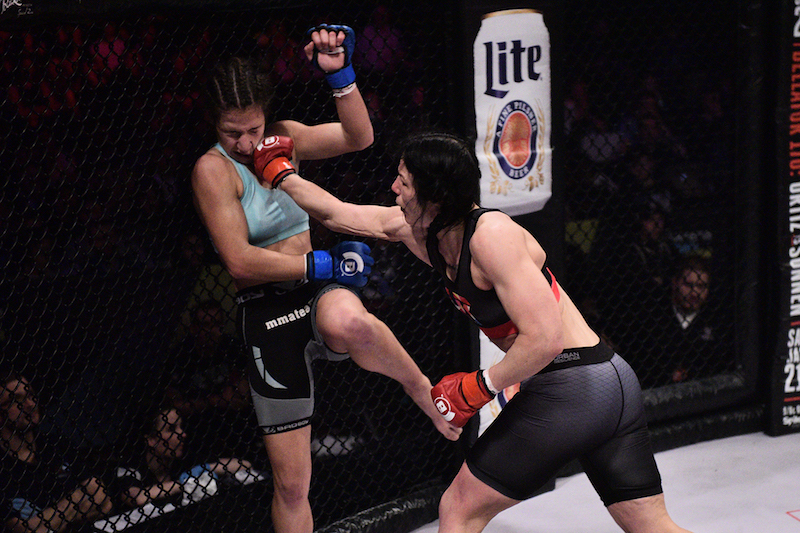 Kavanagh Gets the Irish Crowd Started with UD Victory

Sinead Kavanagh (4-0) was determined to put one on the board for the home team and that’s exactly what she did when she defeated Elina Kallionidou (5-1) by unanimous decision (30-25, 30-26, 30-27). Kavanagh stalked the Greek regional champion around the cage and scored on a great deal of combinations up against the fence. Kallionidou showed impressive resiliance, toughing out firestorm after firestorm of punches and bouncing back as though unfazed. 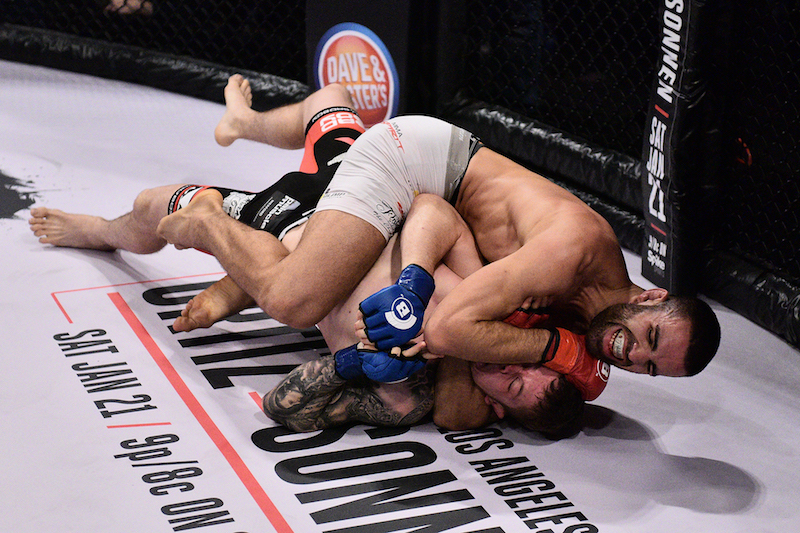 In the first televised fight of the evening, the crowd was loud, hoping to propel their Irishman Brian “Pikeman” Moore (9-5) to victory against Daniel Weichel (38-9). Moore looked sharp on his feet, throwing crisp jabs before getting taken to the canvas. From the ground, Moore fought off several rear-naked choke attempts before rolling into a triangle choke 4:44 into the first frame, making it 0-2 for the Irish-born fighters to start the card. 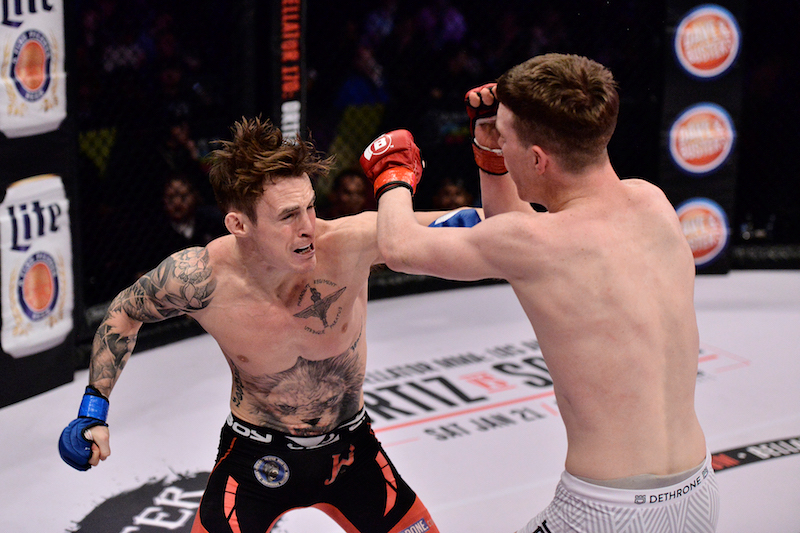 An electric Irish partisan crowd was on hand at the 3Arena in Dublin, but it didn’t take long for Great Britan’s Cameron Else (4-3) to silence them all with a jaw-dropping knockout victory over the highly-touted hometown fighter Dylan Tuke (3-1) only 20 seconds into round one.

By Adam Martin 15 mins ago

By Adam Martin 29 mins ago