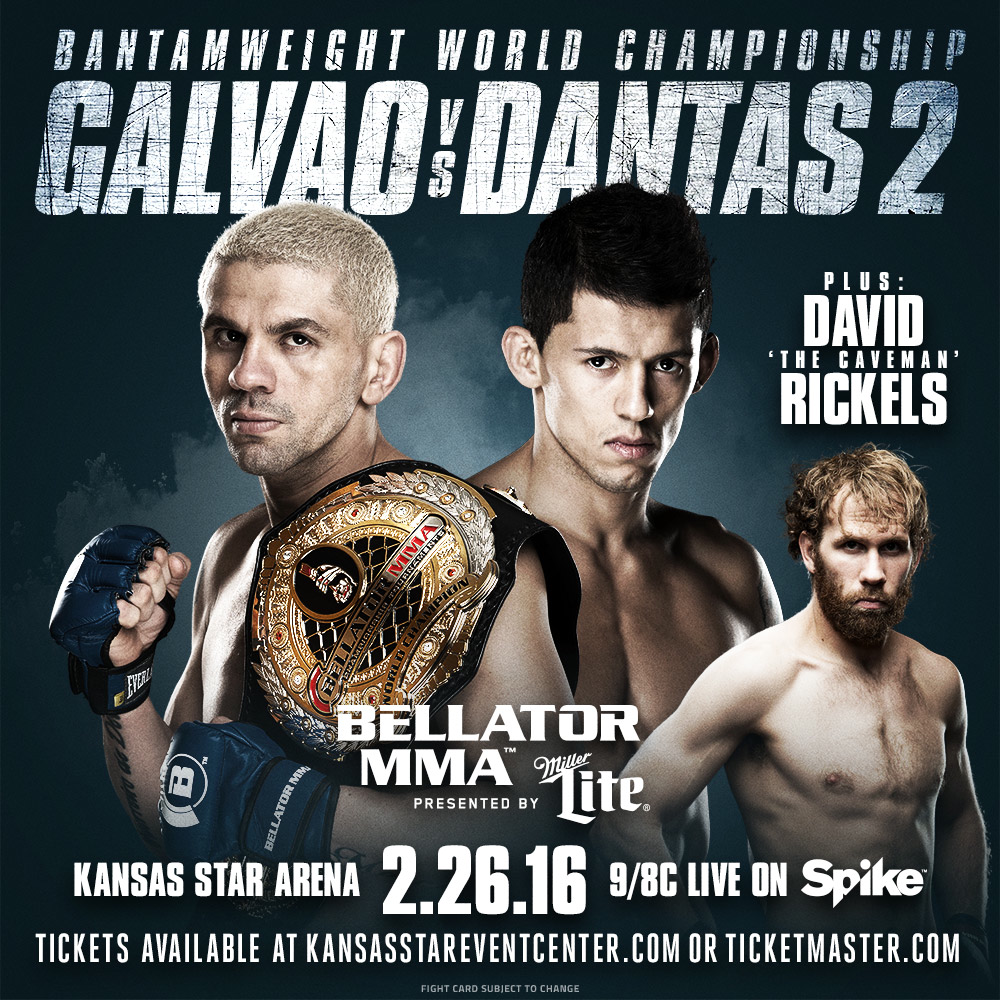 In addition, hometown favorite, David Rickels (16-4, 1 NC) will return to action against an opponent that will be revealed at a later date. “The Caveman” always comes ready to put on a show, whether it’s on his way to the cage, or when he’s taking on a who’s who of Bellator MMA lightweight talent.

The main event, as well as Rickels’ fight will make up two of the televised contests at “Bellator 150: Galvao vs. Dantas,” which airs live on Spike at 9 p.m. ET/8 p.m. CT, while preliminary bouts will stream on Bellator.com at 7 p.m. ET. Additional fights will be announced shortly.

Tickets for “Bellator 150: Galvao vs. Dantas 2,” which start at just $27, go on sale next Saturday, December 12 at KansasStarEventCenter.com or Ticketmaster.com, as well as the Kansas Star Arena box office.

A rib injury sustained by Dantas during training camp forced him to withdraw from his previously scheduled title shot at“Bellator 144: Halsey vs. Carvalho.” Now fully recovered, promotional officials have rebooked the tilt.

“Loro,” who has fought for world-renowned promotions the likes of World Extreme Cagefighting and Shooto since 2003, will be competing for the 11th time under the Bellator MMA banner. The 34-year-old is presently in the midst of a four-fight winning streak and has emerged victorious in seven of his last eight scraps. In his last outing, Galvao finished Joe Warren at “Bellator 135: Warren vs. Galvao” via submission to win his first-ever championship.

Meanwhile, Dantas will be looking to duplicate the success he had against Galvao in their first meeting, which resulted in a second-round knockout at “Bellator 89.” The 26-year-old Nova Uniao product bounced back from his unanimous decision loss against Warren to dispel of Mike Richman in the same manner at “Bellator 137: Halsey vs. Grove.” The Bellator Season 5 Bantamweight Tournament winner is looking to call himself a two-time bantamweight champion come October 23.

Bellator MMA is a leading Mixed Martial Arts organization featuring many of the best fighters in the world. Under the direction of veteran fight promoter Scott Coker, Bellator is available to nearly 400 million homes worldwide in over 120 countries. In the United States, Bellator can be seen on Spike, the MMA television leader.  Bellator MMA is comprised of an executive team that includes top industry professionals in television production, live event orchestration, fighter development/relations, venue procurement, sponsorship creation/development, international licensing, marketing, advertising, publicity and commission relations.  Bellator is based in Santa Monica, California and owned by entertainment giant Viacom, home to the world’s premier entertainment brands that connect with audiences through compelling content across television, motion picture, online and mobile platforms.

Spike is available in 98.7 million homes and is a division of Viacom Media Networks.  A unit of Viacom (NASDAQ: VIA, VIAB), Viacom Media Networks is one of the world’s leading creators of programming and content across all media platforms.  Spike’s Internet address is www.spike.com and for up-to-the-minute and archival press information and photographs, visit Spike’s press site at http://www.spike.com/press.  Follow us on Twitter @spiketvpr for the latest in breaking news updates, behind-the-scenes information and photos.

The Kansas Star Arena, a Boyd Gaming facility, is located just off Exit 33 on the Kansas Turnpike and is adjacent to the Kansas Star Casino.  The 42,000-square-foot, state-of-the-art Kansas Star Arena is south-central Kansas’ home for big-name national acts such as Journey, Pat Benatar, Championship Rodeo, mixed martial arts events and more. The Arena accommodates up to 6,500 guests for headliner events. In 2014, Midwest Gaming and Travel awarded the Kansas Star more than 25 honors in its annual Reader’s Choice Awards, including “Best Concert Venue” in the state of Kansas. For more information, visit kansasstarcasino.com. Connect with Kansas Star Arena at facebook.com/kansasstararena and www.kansasstarcasino.com/entertain/arena. Headquartered in Las Vegas, Boyd Gaming is a leading diversified owner and operator of 22 gaming entertainment properties located in Nevada, Illinois, Indiana, Iowa, Kansas, Louisiana, Mississippi and New Jersey.  Boyd Gaming and Kansas Star Casino press releases are available at boydgaming.mediaroom.com.