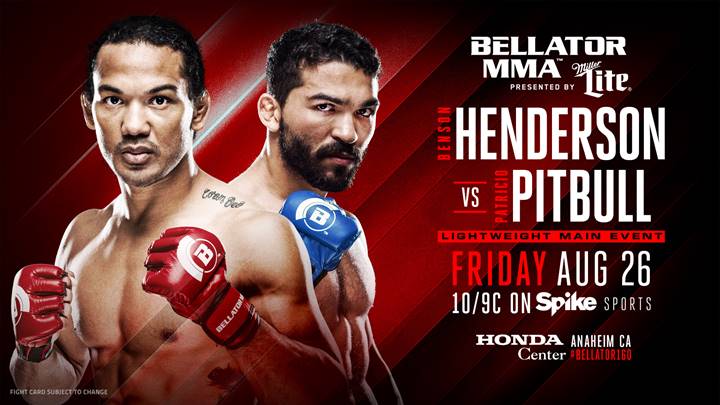 Today, Bellator MMA is pleased to announce that Patricio will be given the opportunity to avenge his brother’s loss – but in order to reach Chandler, “Pitbull” must first defeatBenson Henderson (23-6) in the main event of “Bellator 160: Henderson vs. Pitbull”on August 26 inside Honda Center in Anaheim, Calif., and airing LIVE and FREE on SPIKE.

Tickets starting at $30 for “Bellator 160: Henderson vs. Pitbull” can be purchased on Ticketmaster and Honda Center Box Office starting Friday, July 22 with an exclusive Bellator Nation pre-sale on Thursday, July 21.

Following Chandler’s knockout of Patricky, “Iron Mike” scaled the Bellator Cage to celebrate with his hometown faithful of St. Louis, but was immediately met by Patricio, who had been cornering his brother. The two exchanged words and now Bellator’s former featherweight titlist has made the decision to move up to lightweight and begin his path towards gold in two divisions.

In the way stands Henderson, a former UFC and WEC lightweight champion, who after three fights at welterweight now returns to the division where he reigned supreme for nearly two years. In his Bellator MMA debut, despite a size disparity, “Smooth” fought valiantly against 170-pound champion Andrey Koreshkov, dropping a unanimous decision. Now it will be “Pitbull” who’s fighting the larger competitor, and it all comes to a head during the main event of “Bellator 160: Henderson vs. Pitbull” on Aug. 26, LIVE and FREE on SPIKE.

Additional contests will be announced in the coming weeks.

By Bjorn Morfin 13 mins ago

By Bjorn Morfin 47 mins ago