The moment you’ve all been waiting for is finally here. Full Metal Dojo, one of Asia’s favorite MMA (Mixed Martial Arts) promotions is officially back on November 3 with FMD16: Big Trouble in Little Bangkok.

The event will be in FMD’s hometown of Bangkok, Thailand, and will be Halloween themed after the 1986 Kurt Russell cult classic, ‘Big Trouble in Little China’, set in the mysterious underworld of Chinatown, San Francisco, featuring wise-cracking heroes, Chinese street gangs and magical kung fu ghosts. 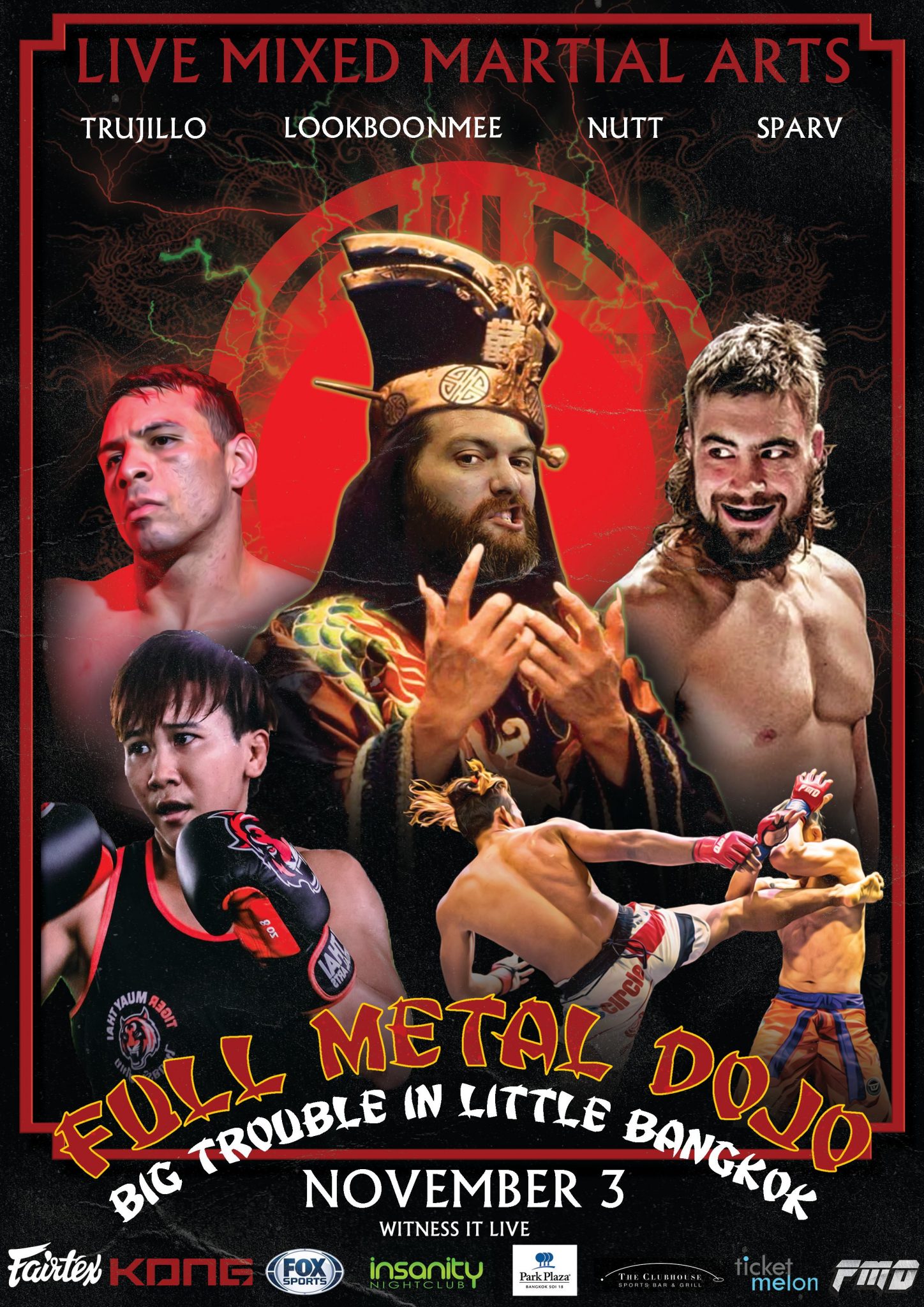 Full Metal Dojo events are synonymous with hard hitting cageside MMA action from the best fighters in the region, in a nightclub atmosphere of borderline madness, built on a solid foundation of honesty and integrity, and topped off with a sprinkling of cinematic class and the laughter of ecstatic fans. But where has Full Metal Dojo been all year, you may be wondering?

A report from Fox Sports Asia states, “For one, they have been working with FOX Sports Asia on a whole host of combat sports-related videos and written content for their digital platforms, including the FOX Sports Asia Facebook page.

“This includes the popular Eat, Pray, Fight series which features combat sports events, personalities and travel across Asia, as well as the Live from Bangkok MMA and combat sports webcast hosted by Kingdom President Jon Nutt.

“Kingdom have also been busy lending their expertise in MMA event production and marketing to various events in Thailand that they have been co-producing, co-marketing and consulting on this year. These include:

“Fairtex Training Center in Pattaya, Thailand’s Muay Thai & MMA Smoker events, which gives a chance for young fighters to get experience in amateur Muay Thai & MMA fights at one of the world’s top combat sports gyms, which expanded from Muay Thai into MMA and BJJ.”

Live Broadcast: FMD16 will broadcast to the world in a dual language livestream from 8pm Thai time (6am PT / 9am ET / 2pm CET) on Fox Sports Asia at facebook.com/foxsportsasia with English commentary from Brad Robinson, the veteran Asian-based MMA fighter, alongside Asia’s Got Talent host Marc Nelson.
Thai commentary is on facebook.com/fullmetaldojo featuring Mark Abbott, FMD host & Thai fitness expert alongside Thai MMA fighter Mangthus Rewtawee.
FMD16 will be hosted by Jon Nutt, founder of Full Metal Dojo, and host and commentator of a never-ending list of combat sports shows across Asia.

Fightcard:
For the first time ever, two FMD Championship Titles will be contested at FMD16, as the contenders fight for the right to lift the winner’s FMD Sword.
Globetrotting prizefighter Glenn Sparv headlined FMD1 and is now ranked the number 1 Middleweight in Southeast Asia on Tapology. He will fight for the inaugural FMD Middleweight Championship against unbeaten top prospect Mehdi Bagheri who claimed a stunning comeback victory at FMD15.

In the co-main event, Muay Thai veteran Loma Lookboonmee, the first Thai fighter to fight at Invicta FC, the world’s top women’s MMA promotion, will face Suwanan Boonsorn, from the Thailand jiu-jitsu team and winner of the first ever professional Thai women’s MMA fight at FMD2 in 2014, for the inaugural FMD Women’s Atomweight Championship.