Former UFC Lightweight & Welterweight Champion BJ Penn has hired weight management specialist Louis “Loutrition” Giordano to prepare him for his return to the Octagon against Cole Miller on June 4 at UFC 199. Penn will be fighting for the first time since July 6, 2014 and for just the second time as a featherweight. 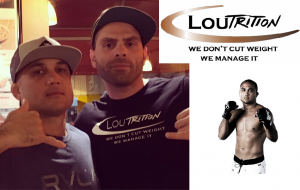 “I am extremely excited to be working with Louis as I have witnessed firsthand how well Loutrition works,” said Penn. “When I made the decision to train with Greg Jackson, it was to make sure I was at my best physically, mentally and emotionally. Watching Lou work with Jon Jones and Andrei Arlovski has shown me how important it is to understand what I am putting in to my body. I am looking forward to competing on June 4 and having Lou in my corner.”

Giordano has been working with many athletes and mixed martial artists, most notably, Eddie Gordon, UFC bantamweight Aljamain Sterling, former UFC welterweight champion Johny Hendricks, former UFC heavyweight champion Andrei Arlovski and UFC interim light heavyweight champion, Jon Jones. His belief is not in cutting weight, but managing it. He is against drastic weight cuts as well as re-hydrating via IV. With determination, hard work and will power, Giordano has helped change the lives of many. After witnessing fighters struggle to cut weight, he decided he needed to help them avoid suffering any long-term health issues.

“I have been a lifelong fan of BJ Penn. I remember watching him and knowing I was witnessing a guy who was changing the sport,” Giordano stated. “When I arrived in New Mexico to work with Jon Jones and realized that BJ was here, I was extremely excited about meeting him. When we spoke about the possibility of working together, I thought back to the time when I watched him compete. I am humbled and grateful for the opportunity to work with a legend.” For more information on Louis Giordano and the Loutrition system, please visit www.loutrition.net.

By Donal Long 49 mins ago