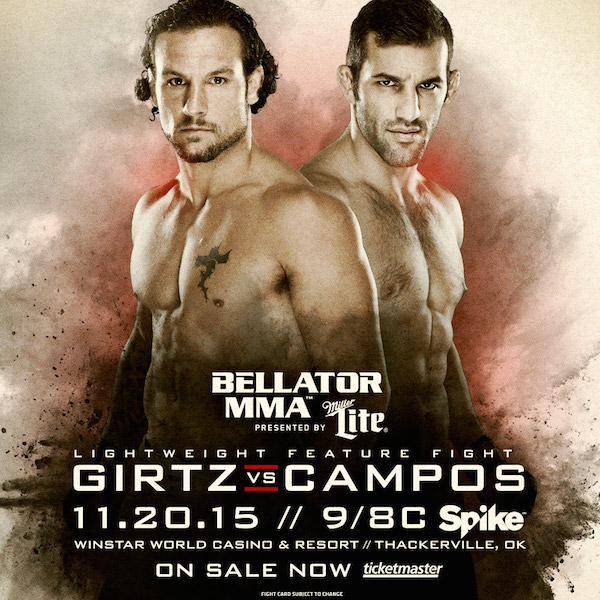 Tickets for “Bellator 146: Kato vs. Manhoef” are on sale now at the WinStar World Casino and Resort Box Office, as well as Ticketmaster. Ticket prices range from: $75, $55, $45 and doors for the event open at 5:00 p.m. CT local time, with the first contest taking place one hour later.

Coming off a fight that many mixed martial arts media members and fans consider to be an upset, Girtz will “Cold Roll” his way into “Bellator 146: Kato vs. Manhoef” riding momentum from his split decision win against Melvin Guillard at “Bellator 141: Guillard vs. Girtz.” Now, with two wins in his last two Bellator MMA appearances, the 30-year-old Minnesota resident will look to redeem himself from a unanimous decision loss suffered against Campos more than two years prior.

On the opposite end of the spectrum will be Campos, who is coming off a defeat at the hands of Michael Chandler at this past June’s record-breaking “Bellator 138: Unfinished Business” event. “The Stallion” will hope to duplicate the success he experienced at the expense of Girtz during “Bellator 96” where he took home scores of 29-28 from all three judges sitting at cageside. Campos will be competing close to home, with Lubbock, Texas being a short drive away from Thackerville, OK.

By John Eric Poli 14 mins ago

By John Eric Poli 21 mins ago

After an eventful start to 2020, Eddy George is staying on track during pandemic