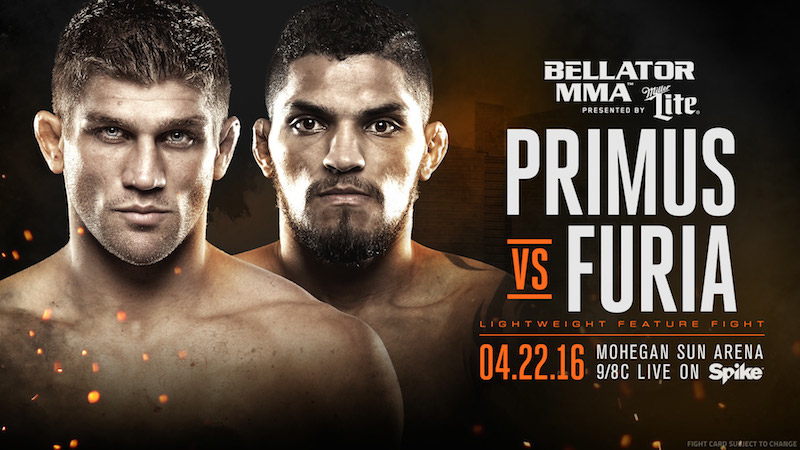 The main card line-up for“Bellator 153: Koreshkov vs. Henderson” on April 22 continues to grow, with today’s addition of Brent Primus (6-0) versus “Toninho Furia” (27-5) in lightweight action at Mohegan Sun Arena in Uncasville, Conn.

The bout joins a main event that features the highly anticipated Bellator debut of Benson “Smooth” Henderson (23-5), as he challenges welterweight champion Andrey Koreshkov (18-1) for his belt. Former featherweight titlistPatricio “Pitbull” Freire (24-3) meets John “Macapa” Teixeira (19-1-2) in the co-headliner and Connecticut’s own “Irish” Brennan Ward (13-3) returns to action, when he welcomes Evangelista “Cyborg” Santos (20-16) into the Bellator MMA fray at 170-pounds.

Tickets for “Bellator 153: Koreshkov vs. Henderson” start at just $30 and are on sale now at Bellator.com, Ticketmaster.com and the Mohegan Sun Box Office. The event airs live and free on SPIKE at 9 p.m. ET/8 p.m. CT, while preliminary bouts will stream live on Bellator.com and The Bellator Mobile App. Additional contests will be announced shortly.

Widely regarded as one of the sport’s top prospects, Primus is a fighter who has sacrificed a fledging landscaping company that he owned in order to pursue his dreams of MMA gold. Primus returns to the Bellator MMA cage fresh off a hard-fought victory over Derek Anderson at “Bellator 141: Guillard vs. Girtz.” Now, the Brazilian jiu-jitsu black belt will look to apply his craft for the fifth time under the Bellator banner – making his first appearance during the SPIKE-televised main card.

Following his promotional debut, “Toninho Furia” has decided to make return to the 155-pound lightweight division from featherweight, where he last competed. The 27-year-old Brazilian Top Team product has competed professionally since 2005 and has won nine out of his last ten matchups. Furia has a proven affinity for ending fights early, with eight of his victories coming in the opening frame.

For more information on these two prospects, take a look at each of their profiles on Bleacher Report: