HOLLYWOOD, CALIF. — (Jan. 13, 2017) – A pair of heavyweight fights featuring undefeated blue chip prospects Jarod Trice(1-0) and Tyrell Fortune (1-0) have been added to the Bellator.com-streamed preliminary card of Bellator 171 at the Kansas Star Arena on Jan. 27. 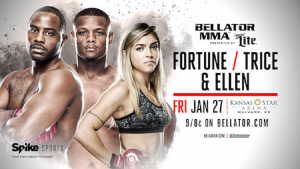 Also added to the preliminary portion of Bellator 171 is Bruna Ellen (2-1), who will take on Carmella James (Debut) in a female flyweight clash. The new additions join a competitive undercard that is highlighted by a middleweight fight pitting the undefeated Chris Harris (7-0) against Jordan Young (5-0), along with Gaston Reyno (6-1, 2 NC) versus Justin Overton (3-2).

A catchweight bout putting Melvin Guillard (32-16-2, 3 NC) against knockout artist Chidi Njokuani (16-4, 1 NC) will serve as the evening’s main event, while fans will have the opportunity to see the return of “The King of Kansas” David Rickels (17-4, 2 NC) in a lightweight co-main event fight with Aaron Derrow (14-8). Undefeated phenom A.J. McKee (6-0) will take on Brandon Phillips (6-2) in a featherweight feature fight and Kansas’ own Jessica Middleton (1-0) challenges Alice Yauger (4-4) in a female flyweight bout on the SPIKE-televised main card.

Tickets for Bellator 171: Guillard vs. Njokuani start at $24 and are on sale now at KansasStarEventCenter.com, as well as Ticketmaster.com. The event will be broadcast live and free on SPIKE at 9 p.m. ET/8 p.m. CT, while preliminary action will stream on Bellator.com and the Bellator Mobile App.

A highly touted wrestling prospect out of Detroit, Michigan, Jarod Trice will make his second appearance inside of the Bellator MMA cage and is looking to build off of an impressive professional debut. The 27-year-old standout was awarded three All-American honors, as well as a National Title at 120 kg and two Greco Roman National Titles, prior to joining the Bellator MMA fray in 2016. Now Trice is looking to make a name for himself in the world of MMA, after delivering an exceptional performance in his first career win over Tommie Britton at Bellator 167 just over one month ago. Kansas’ Kevin Woltkamp (1-2) will challenge Trice, and will look to play the role hometown spoiler when he competes in front of thousands of friends and family.

After earning state championships in nearly every national age-group in both freestyle and Greco-Roman wrestling during high school, Fortune went on to compete at Grand Canyon University’s highly acclaimed program, where he was named the 2013 Division II Wrestler of the Year, taking home a NCAA Division II championship in the process. The Portland, Ore. native began his career under the direction of Bellator MMA last year, earning a sensational first round knockout victory in his debut at Bellator 163. The 26-year-old now hopes to preserve his unblemished record when he enters the cage for the second time against Will Johnson, who will be making his professional debut.

Hailing from Sao Paulo, Brazil, Ellen enters the bout looking to build off the momentum she came into Bellator with after signing with the Viacom-owned promotion last year. The flyweight prospect began her professional career with back-to-back victories in 2015, including one victory coming after a brilliant knockout win in the opening round of action. Now, the 20-year-old Brazilian makes her second appearance under the Scott Coker-led promotion in the same venue where she made her debut.