Saturday night, at Rivers Casino and Resort in Schenectady, New York, Cage Wars will be hosting their 41 installment with Cage Wars 41. Cage Wars is a premier New York amateur MMA promotion based out of Albany, NY. This fight card will host a high-level undercard, followed by a stacked main card.

The main card is headlined by a super heavyweight title fight between Jeremy Woolfolk (4-0) and Jonathon Marconi (4-4). Five title fights will take place at this sold-out event.

Fights will be streamed online, visit www.cagewarsny.com to learn how to purchase the stream, which will be commentated by My MMA News’ very own journalist, Kyle Carroll. Doors swing open at 5 PM and fights will be starting at 6 PM.

Make sure you follow My MMA News on social media at @MyMMANews for the live results.

This article is sponsored by Pure Spectrum CBD. A product for adults and Adults can use our code “CCMMA” to get 10% off all products when clicking the link below. https://www.purespectrumcbd.com/?ref=111

Jeremy Woolfolk def. Jonnathon Marconi – for super heavyweight title via TKO due to tap in round 1, at 2:30.

Isaiah Sackey-El def. Jonathan Piersma – for welterweight title via TKO in Round 1, at 2:59.

Cole Alaxanian vs. David Hawker – for super lightweight title Hawker def. Alaxanian via Submission (Kimora) in round 1, at 0:37.

Adam Barrett vs. Brendan Kennedy – for bantamweight title Kennedy def. Barrett via TKO in round 1, at 1:09.

Harley Locklear def. Nathaniel Grubham Via TKO in Round 1, at 0:50.

. James Carroll def. Branden Gilmour via Submission RNC in Round 2 at 1:53. 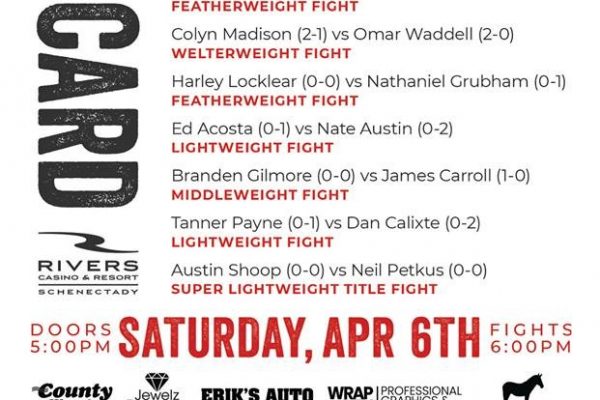 By Eric Kowal 29 mins ago