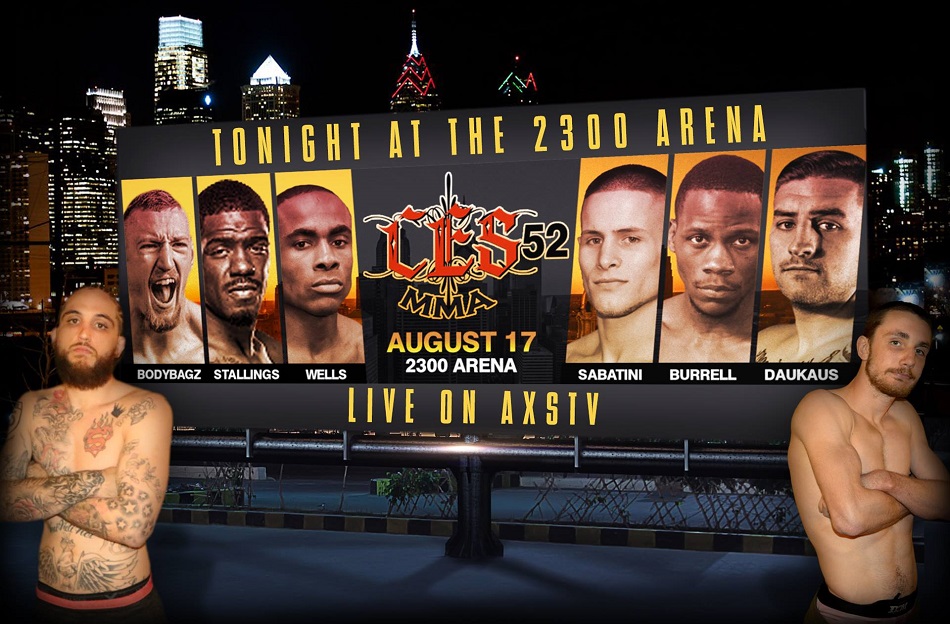 CES MMA comes to Philadelphia for the first time tonight, live on AXS TV from the 2300 Arena. For those of you who can’t make to the venue, you can watch the fight card from the comfort of your home.

The night started with a fantastic rock ’em sock ’em type back and forth brawl between amateurs Mark Khavinson and Jon Naji. The fight was ruled in favor of Khavinson by way of split decision, much to the crowd’s dismay.

On the heels of the spectacular opening bout, Eddie Torres made quick work of Damir Bradley, submitting him just 33 seconds into the fight.

Then the night’s biggest star walked to the cage for his first mixed martial arts bout. John Garbarino of Balance Studios had the crowd on their feet to support their hometown fighter. Garbarino wasted no time in taking the fight to Nick Bord. Garbarino wins by way of split decision.

Tommy Majeski is another young stud with a large following. Majeski didn’t need a whole lot of time to please his fans, submitting his opponent, Danny Odom just 67 seconds into the fight by way of rear-naked choke.

Heavyweights Flash Bradley and Gavin Nickel duked it out for a full three rounds, aiming to knock each other’s heads off. This was yet again, anoter close fight and the third split decision on the card in just five fights.

Jace Kendle overcame an early takedown and mount position by opponent Shawn Steffanelli to come back and win all three rounds on the judges’ scorecards. With the victory Kendle moves to a perfect 3-0.

In the main preliminary bout, Lenny Rufati took on wrestling standout Trent Stump. Rufati sought out a fight with Stump on social media, and tonight his wish came through. Not looking to make a fool of himself, Rufati went straight to work but Stump was not making it easy. This fight, with advanced amateur rules, allowed for the fighters to strike to the head while on the ground. Rufati connects with a big kick to the liver followed by a punch that dropped Stump. Stump collapses but immediately shoots in for a shot. The scrap continues. Round two likely to go Rufati. Round three is just the opposite as Stump gets on top and delivers vicious ground and pound to his opponent, while sneaking in several submission attempts. Stump wins the fight unanimously on all scorecards.

Get him a bodybag

A ‘BodyBagz’ chant erupts before the first fight on AXS TV as Jo Pyfer makes his way to the cage to face DJ Wilson. It wasn’t your typical first round for ‘BodyBagz’, well not the one you hope for as a fan at least. Instead of pummeling his opponent with his fists right out the gate, we saw a Jo Pyfer that put his opponent on his back, and worked for submissions. Pyfer didn’t completely forget about his hands and he landed a few shots both on the feet and from the mount but we didn’t get the highlight reel knockout in the opening frame. Round two starts, Pyfer scoops Wilson up and slams him to the ground. With full control of his opponent’s back, Pyfer goes to work. Completely dominant round for Pyfer. This one could be a 10-8 round for Pyfer even though he did n. Maintained dominant position from start to finish. Pyfer gets the takedown once again in the third and final frame and works the body from a dominant back position. Pyfer wins the fight by way of unanimous decision.

Suitcase Kid packs it up

An inadvertent low blow to Ed Shupe temporarily halts his fight with Eugene Aubry in the first round of their scheduled three round bout. Once the action resumes Aubry goes to work, teeing off on Shupe and the fight is waved off seconds later. Aubry wins by technical knockout just two and a half minutes into the fight.

Chris Daukaus, a police officer in the city of Philadelphia, entered the cage to throw hands with Johsua Marsh in the third pro bout of the night. Marsh lands a front kick flush to the face of Daukaus. The two begin to exchange heavy hands. Marsh connects but Daukaus pushes forward. They briefly exchange from the clinch before they go to the mat. Great first round. We proceed to the second, and Officer Daukaus goes to work.

Pat Sabatini feels out his opponent Boimah Karmo with several kicks to start the fight. Sabatini then lands a wheel kick followed by two big body kicks before he takes the fight to the ground. He sinks in a rear-naked choke and finishes the fight in the first round.

It appears that Ron Stallings may have hurt his leg in the first round of the co-main event fight against Nah’Shon Burrell. Stallings briefly limps but regains his composure and stands toe-to-toe with Burrell. The five-minute round is mainly contested on the feet until the final seconds where Burrell looks to take the fight down. Stallings appears to still be having trouble with the leg here in the second. They are pressed up against the cage looking for position. Burrell lands a big takedown. The round ends with Stallings looking to gain control. While in a standing position in the third round, Stallings has back control. The two men start to duke it out, each connecting but no clear concise victor. The final 10 seconds they really begin to let the leather fly.

Jason Norwood scores an early takedown in his main event welterweight championship bout with Jeremiah Wells. The U.S. Army Soldier is working shots to the body from the top as Wells is trying to get up. Norwood denies him. Wells works for a D’Arce choke from the bottom but as he squeezes, his hands break free. Norwood backs Wells up in to the corner and begins peppering the body. Wells throws a flying knee in the early seconds of the second round and the crack echoes throughout the 2300 Arena. In the process Wells flips over the top of Norwood. They fight to their feet and Wells is connecting on Norwood who now has a mouse formed under his left eye. Norwood goes to throw a kick in the final seconds and slips as Wells also connects. The round expires and Norwood is exhausted. Wells dominates for most of the remainder of the fight as Norwood is eating elbows from the bottom. Wells win unanimously and is the new welterweight champion.

Official CES 52 results are as follows: