This Saturday, February 8, 2020, Christine Williams will be making her MMA debut at Art of War Cage Fighting 17 during their All Star Weekend in a 155 pound bout against Gabrielle Giordano.  The event will be held at the 2300 Arena in Philadelphia and is headlined by Bassil Hafez vs Smith Amisial.  Doors open at 6:30 p.m. and the fights begin at 7:30 p.m.  You can check out the full event line up below. 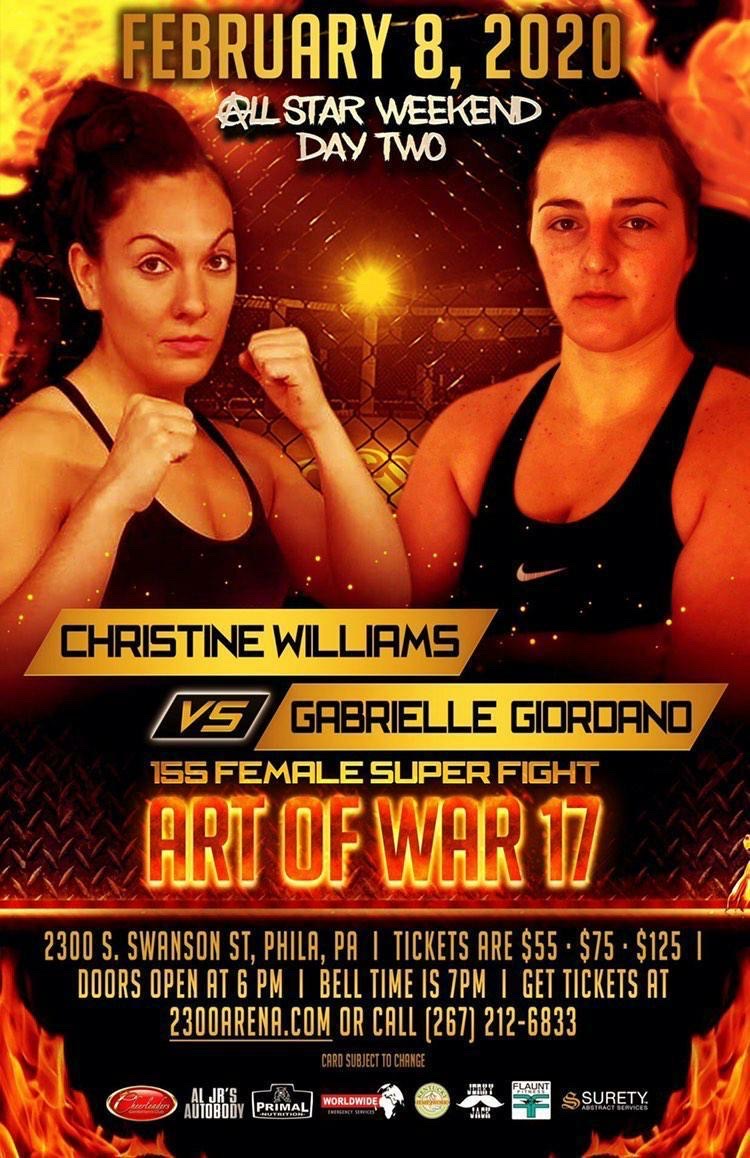 Williams is a 30 year old mother who works full-time on a pig farm and still finds time to commit to training martial arts.  Heading into her debut this weekend, I got a chance to sit down with her and talk about what got her to this point and where she plans on going from here.

How It All Began

Growing up, Christine was always interested in martial arts and her older brothers trained as well.  They would watch wrestling together and the arts just always intrigued her.  As she got older, she found herself in some really abusive relationships which further influenced her desire to train.  Having those sort of situations happen to her really pushed her to the point where she realized that she needed to be able to protect herself and her loved ones.  She started training jiu jitsu first but quickly found her passion in striking, and specifically Muay Thai.  It wasn’t her goal to get an MMA fight at first, but once she started seeing her progression in training she started to think it was something she could actually do.

She currently trains out of Bulldog MMA in Carlisle as well as Tactical Combat Academy in Greencastle, where she earned her blue belt in jiu jitsu.  She credits her job as a pig farmer for helping her with her conditioning, because she is constantly moving around 300 pound animals and there is a lot of bending, lifting, climbing, and other physical activity involved during the day.  Christine gets up before the sun rises to go to the farm and still does some type of training essentially every night after work.  She goes on to tell me that in a typical training week, “if it’s a running day I’ll go for a run, or I’ll do my powerlifts and some other lifting, but if it’s a fight camp then I’ll do circuits along with my heavy lifting.”  Then she’ll go to class, whether it be a jiu jitsu class, striking, or mixing it all together.  At Bulldog MMA, “this camp has been basically Monday through Thursday, just every single day right after work.  And then the weekends I’ll try to get up to TCA for some sparring along with my running on the weekends.”  She certainly manages to keep her schedule full considering she is also a wife and mother of a toddler.

Weight Classes and Finding an Opponent

When asked how she feels about women’s weight class in MMA, Christine emphatically told me “WE NEED MORE!  I understand being fit, ya know, but I feel like the guys get a lot more leeway in where they can go in weight, where they can experiment where they’re good at.  Where as females, we have to be cutting so much weight and I think it’s crazy like some of these girls are cutting 30 pounds just to get down to a good weight class.”  In her case it was hard to find a heavier girl for a fight and she is extremely pleased that she was finally able to debut at 155 pounds rather than having to try to cut more weight.  She thinks that we need more heavier girls so we can start pushing those barriers, like Kayla Harrison is doing in PFL.  With that said, her weight cut for this fight is going extremely well right now since she was able to find an opponent at a more realistic weight for her.

Christine told me it was “very difficult” to find an opponent to finally make her debut.  She has been looking for an opponent for quite some time now, whether it be for an MMA fight or a Muay Thai fight, but finding someone her size has been like finding “a needle in a haystack.”  She’s even had some fights lined up in the past year or so which ended up falling through.  “It sucked,” she told me, “the hardest thing is you go through fight camp and you’re training and you’re going through all your mental stuff and then when they fall through it’s just this big bummer like what was it all for?  But looking back now it definitely has helped with growth.”  Needless to say, when Christine finally got the call for this fight she “jumped on it right away.”  Now that the fight is set and she is finally going to make her debut, Williams is excited and anxious.  She said that “it is still hard to believe it’s actually happening.”

Heading Into the Fight

Christine will be walking out to the song Stadium Pow Wow by A Tribe Called Red.  “I picked out this song because I promised a close family member from the Lakota side of my family who is on the reservation right now, to honor them and the women of our family and of the tribe and all of the warriors.  They talked to me about how strong women really are, especially back in Native times, how the women really were depended on during war and everything.  So that, for me, is just that thing of how powerful we are and I want to represent that as I walk out.”

In the fight itself, Christine just wants to show what she’s learned throughout multiple fight camps and finally get to show the skills she has been working on for so long.  She just wants to put on a good performance and show that she knows what she’s doing and has been putting the work in.

Christine would like to thank her coaches heading into the fight, for believing in her even when she didn’t believe that she was ready to fight yet.  Mark Krumine from Bulldog MMA and Josh Hummer from Tactical Combat Academy will be the two coaches in her corner this Saturday.  She also wants to thank her teammates from both gyms for helping to push her and get her ready for so long, even through the fights that fell through.  Josei Heishi has also been a big supporter and Christine is an ambassador for the brand. 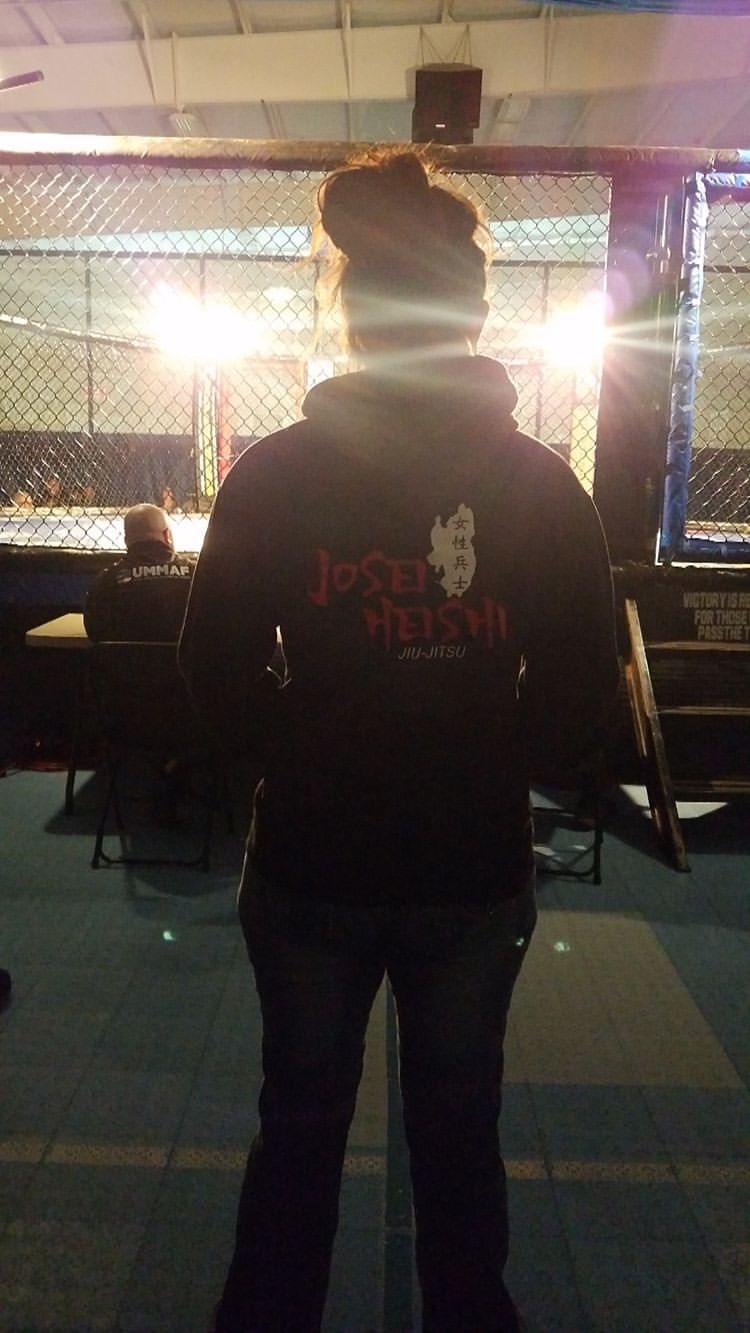 When I asked if she had a cheat meal in mind for after the fight she said “CHEESESTEAKS, of course.”  Particularly since she is fighting in Philly that shouldn’t be too hard of a request to satisfy.  She also plans on chowing down on some Mom’s Beef Jerky after the fight.

Going forward, Christine is already signed up for a Thai Boxing Association (T.B.A.) tournament in Iowa, which is a three day Muay Thai tournament.  That is in June and is next on her list, unless of course another opportunity were to come up before then.  She does plan to continue to look for more MMA fights as well and just seeing what she can get.

“Of course Pearl Gonzalez from Invicta FC.  I love her, she’s amazing.”

“Ilima-lei MacFarlane from Bellator and of course Amanda Nunes and Cyborg.  Julia Avila, the Raging Panda, as well.  All of those ladies, for some reason, just the way they fight I just love watching all of them.  Even their personalities and how they go about the fight and how they train for the fight, those women are who really call to me because they’re all so hardcore into it.  And some of them just the way they fight I see myself fighting that way.”  Becca Evans is also another role model of Christine and will be in attendance at AOW 17 this weekend as well to show her support.  Christine said Evans is “an amazing Muay Thai boxer,” is a 4-0 amateur in mma, and they have worked together in training once before.

Good luck to Christine Williams in your MMA debut and thanks for giving us the time.

ART OF WAR 17 EVENT LINE UP

By Dylan Bowker 41 mins ago