Victory Fighting Championship’s return to Omaha, Nebraska, will featured a hotly anticipated matchup between two of the organization’s leading welterweights. 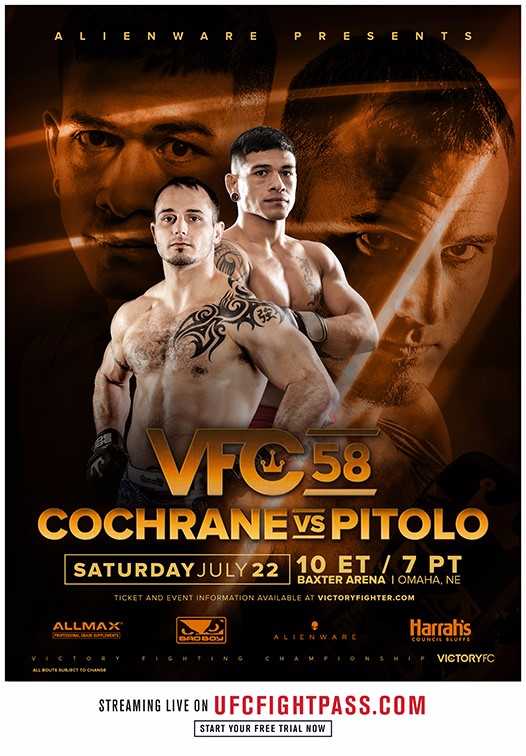 In the main event, fan favorite Dakota Cochrane will make his 11th appearance under the VFC banner as he meets former title hopeful Maki “Coconut Bombz” Pitolo in a 170-pound showdown.

Tickets for VFC 58 are available at www.ticketmaster.com.

Cochrane (28-12) remains on a tear since the start of a career resurgence as he has earned victories in nine of his last 12 bouts, including a unanimous decision victory over Dave Castillo earlier this month at VFC Fight Night at Harrah’s 5. Before dropping a decision to E.J. Brooks at VFC 56, the Kearney, Iowa, product scored a pair of impressive wins over Jake Lindsey, highlighted by a first-round submission in their highly touted rematch at VFC 55 back in December.

Cochrane has also picked up submission victories at VFC 52, VFC 47, and at VFC Fight Night at Harrah’s 3. The 30-year-old has notched finishes in 19 of his 28 career victories, 12 of those via submission.

This matchup will be Pitolo’s first since falling short in his quest for the VFC welterweight crown against Kassius Holdorf at VFC 54 in December. Pitolo (10-2) won an original clash with Holdorf at VFC 52 by decision – a fight which “Killa Kayne” took on short notice. In the subsequent rematch for the title, Pitolo suffered a second-round knockout defeat which put the belt around Holdorf’s waist. Holdorf has since dropped the title to Yuri Villefort after a unanimous decision loss in Omaha at VFC 56 in April.

Pitolo, a native of Nanakuli, Hawaii, had won nine in a row before his title loss to Holdorf, with seven of his 10 victories being finishes and four coming inside in the first round. The 26-year-old sports a 3-1 record inside the VFC square cage with earlier wins coming at VFC 49 (second-round TKO over Andrews Nakahara) and VFC 50 (48-second knockout of Justin Guthrie).

The remainder of the action-packed main card will be announced shortly.