Cody Gibson is calling it quits again, this time he is ending his retirement and stepping back into the cage to fight again. The past year and a half has been a year of growth for the 31 year old fighter out of California, with that growth has come lessons learned and many lessons taught. The former UFC fighter known as “Renegade” used his time outside of the cage to fall back in love with the sport of mixed martial arts and to teach full time as a U.S. History and economics teacher at El Diamante High School in Visalia, CA where he also helps coach the wrestling team.

The beginning of his retirement saw Gibson leave the gym for a few months, something he hadn’t done before. That lasted only a few months as he slowly made his way back into the gym. Taking a few classes and then starting to attend a few practices. But it wasn’t the physical training, hitting the pads, practicing jiu jitsu was enjoyable to Gibson but it was a new perspective that has allowed him to find his way back to the cage.

That pressure led him to great heights, he signed with the UFC and fought well though it didn’t show in his record. The Renegade went 1-3 in his stint with the world’s top promotion which included fights against Aljamain Sterling, Johnny Bedford, Manny Gamburyan and Douglas Andrade. He defeated Bedford by knockout but was released after his loss against Andrade.

After the Andrade fight, Gibson was let go by the UFC, he made his way to the regional circuit and picked up three quick wins, hoping to make it back to the promotion. But he picked up a loss in his last outing when he went up a weight class to try and pick up another title. It was shortly after then that he realized, though he was putting in the hard work, it was time to step away.

“I think it accumulates a little bit, I worked hard for those fights outside the UFC but I didn’t have the same motivation or the same love for training that I did previously when I first started.”

He also never thought that he would step back in the cage when he retired but the passion came back.

“In my mind and I know I’m a big cliché in coming out of retirement, I know a lot of fighters do it. In my I wasn’t going to be one of those guys, I was going to move on to different phase of my life. That was my mindset, it’s one of those things you might hear, you know everybody hears a lot of fighters retire and come out of retirement, but you don’t think it’s going to be you. You have a mindset in place that, you’re going to move on. This sport is has a way of, it’s an addictive sport, it drags you back in.”

Now Gibson is ready to make his return, he will face highly touted Brazilian prospect Gustavo Erak at LFA 51. Though he won’t be putting the same level of pressure on himself to succeed or make it back to the UFC, it doesn’t mean he isn’t putting in the same level of hard work.

“That doesn’t mean I’m not training with, at the same rigor because I am but I’m not taking it as serious in the fact that it’s a do or die, I have to win, winning is the only thing that matters, I have to get back to the UFC, I have to make money, I have to, I have to, I have to. I have a different approach towards. I think I’m more excited than I would’ve been before because that pressure is gone. Obviously I’m coming to win but at the end of the day I love to do this and I’m going to keep doing it as long as I continue to enjoy doing it. That’s kinda my approach now so, it’s definitely a complete 180 from what it used to be.”

Through it all, Gibson is taking those lessons and let’s his students and wrestlers benefit alongside him.

“I try to come across as, I’m not some freak of nature athlete or out of the ordinary individual, I’m just someone who rested on the accolades of just working hard and clocking in and putting your head down and getting to work. That’s how I approach it with the kids, it’s like, you can achieve anything in life if you put in the time, energy and effort and you have the perseverance and the drive and the commitment to it, there’s nothing that you can’t do.”

Not only does he preach about hard work, he is also willing to discuss his mistakes, most notably if his viral moment a few years ago. After one of his fights, Gibson went to a bar with friends and a disorderly patron at the same bar had a minor issue with him. Gibson tried to diffuse the situation but it was after a few beverages and he told the other patron that picking a fight wasn’t a good idea for him, using the phrase “Google me bitch” which took on a life of its own in today’s social media age. When it is inevitably brought up by a student, Gibson doesn’t brush it off, he uses it as another teachable moment.

“If they research me they usually find it and ask about it, that’s how I try and approach it, like, hey, you make mistakes and you own up to it first and foremost and then you learn from it.”

Teaching and fighting have a lot in common, there is always work to be done, whether it’s preparing a lesson plan or getting in an extra conditioning session. Hard work is something Gibson has never been afraid of but many would ask if he is as dedicated as fighters who go all in on their fight careers and don’t have a good full-time job like he does. But for Gibson, he believes it makes him a more dangerous fighter because he chooses to do it, he doesn’t have to but he loves it and wants it. It’s his choice to wake up at four in the morning to do a workout session or give up family time to train.

“It’s an interesting type of question because on one hand, you can look at it like that these guys that are all in that there is more motivation, there is more drive because they don’t have anything else to fall back on. On the flipside, you can look at it like, I don’t have to do this, this is my choice, I choose to struggle, I choose to get through those tough workouts and put a lot on my plate when I’m very busy. Cause I still try to train like I’m a full-time fighter as far as the amount of hours I put in in a day. That might mean I’m waking up at four in the morning to get a training session in before work. I don’t try to, in my professional life or as an athlete, I don’t try and cut any corners. I almost have a chip on my shoulders I feel like at times, I don’t have the same ability as these other guys have, a lot of these guys wake up at ten o’clock going through their first training session, then lounge around all day and then come back in the evening. I don’t have that luxury I guess, because I have a family because I have a mortgage and I have these responsibilities that require me to work, I almost have to put in more effort than these guys to keep up with these guys.”

The guy Gibson is not only trying to keep up with but defeat is Gustavo Erak. Erak is from Brazil and like Gibson is making his LFA debut. The Brazilian has an impressive record of 22-1 and hasn’t lost in a couple of years. The fight excites Gibson because it’s a tough fight. 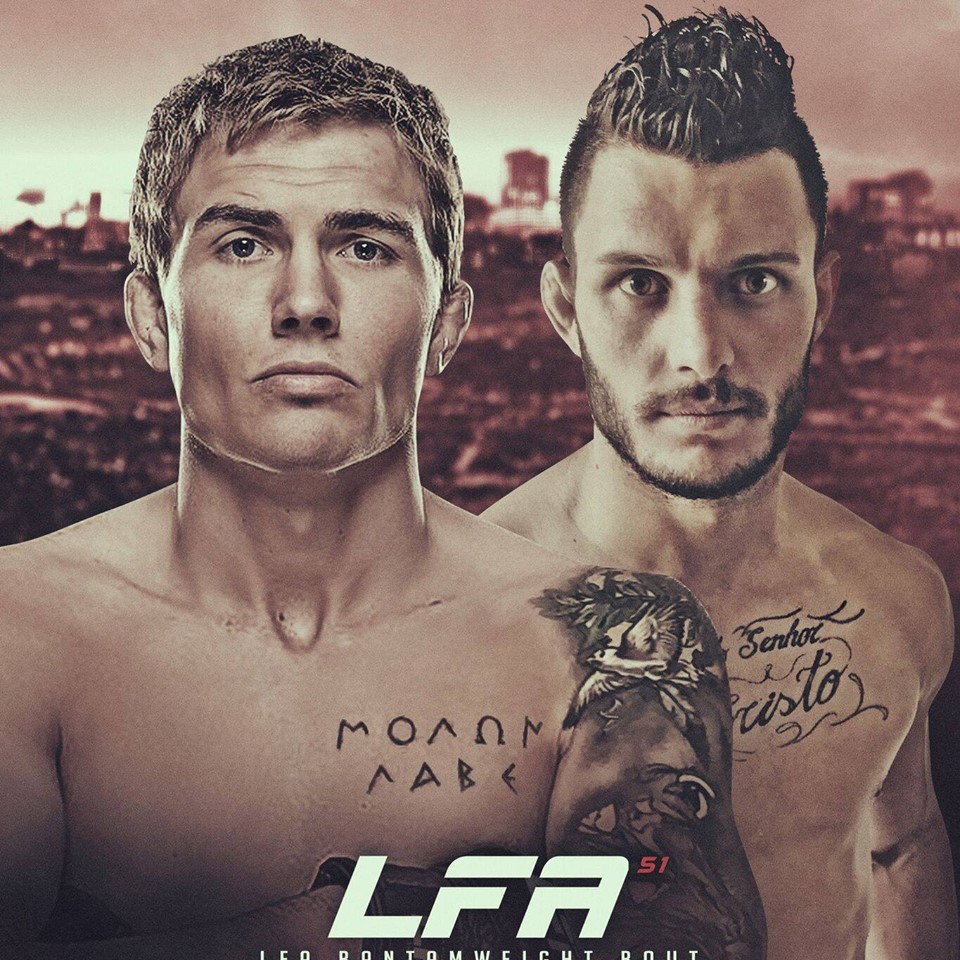 “For me you can’t be in this sport and be afraid to fight anybody in your weight class. He’s definitely a worthy opponent.”

The Renegade is also excited to redeem himself against Brazilians.

“I’m 0-1 to a Brazilians, I lost a decision in Brazil against a Brazilian, I’m excited to redeem one for my countrymen.”

Gibson sees Erak as mainly a Muay Thai fighter and he plans on using his well-rounded arsenal of skills to dictate the fight., a fight in which he doesn’t see the judges involved in.

“I really don’t see the fight going the distance, I think I finish him. How, I don’t know, I don’t know if I knock him out or submit him or I ground and pound him for a TKO. I can see any of those things”.

The fight will take place in Fresno, CA, not too far from where Gibson teaches, and it wouldn’t surprise or bother him if any of his students attended.

“I know a few that will probably go, I had students in the past go to fights.”

“It doesn’t bother me, I told my wife, let’s have my two-year-old, I don’t care if she comes to the fight.”

When asked to compare himself to someone he teaches about, Gibson picked out two very important figures in the history of the United States.

“Well Abe Lincoln was known as a pretty ferocious wrestler. Undefeated apparently, this is kind of folklore.”

“Teddy Roosevelt, he was shot in the chest during his campaign speech and refused to leave the stage until he finished his speech. He was a Rough Rider, he brought together pretty much the toughest guys he could find and go to Cuba and fight the Spanish. That guy was probably one of the toughest presidents we’ve ever had.”

Gibson put himself in the company of Lincoln and Roosevelt because he believes he is one of the best bantamweights in the world.

“I truly believe I am one of the best bantamweights in the world.”

He intends to prove that on September 28, no matter where the fight goes.

“I can finish this fight from any position.”