This Friday, February 22, 2019 at 10 PM ET/7 PM PT, Eddie Bravo will be bringing back his combat jiu jitsu ruleset for the first Combat Jiu Jitsu Fight Night in at the Florentine Gardens in Los Angeles, California.

The event will feature a 4-man absolute combat jiu jitsu bracket, as well as an 8-man qualifier for EBI 19’s 16-man bantamweight tournament.  The absolute and bantamweight competitors that have been announced are listed below.  There will be some superfights included as well, including EBI champion Beatriz Mesquita’s combat jiu jitsu debut against fellow EBI veteran Kayla Patterson.  You can check out the preview for Mesquita v. Patterson below.  The event will be streamed on UFC Fight Pass or you can go to inchbyinch.tv for the PPV or tickets to attend live.

The inaugural Combat Jiu Jitsu Fight Night could easily go down as a cursed event if there ever was one due to all of the competitor withdrawals.  When it was first conceived, the absolute tournament was the main feature and included names such as former UFC champion Fabricio Werdum, UFC veteran Vinny Magalhaes, ADCC and EBI champion Gordon Ryan, and UFC veteran Josh Barnett.  Since then the card has certainly been subject to change, particularly as far as the absolute division goes.  Vinny was the first to withdraw and was replaced with EBI veteran Rustam Chsiev.

Werdum also withdrew and was replaced by another EBI veteran and ADCC champion in Yuri Simoes.  Just a couple weeks ago after sustaining an injury to the knee at Kasai Super Series, Gordon Ryan, who was arguably the favorite to win the bracket, was also forced to withdraw.  Luckily, the EBI 17 Combat Jiu Jitsu Middleweight champion, Jon “Thor” Blank, was able to step in for Gordon on short notice.  Since then Rustam, who was already a replacement himself, has been replaced by UFC veteran “King” Kevin Casey.  Josh Barnett, who was the last hold out from the original line up, has also now been replaced with Stephen Martinez.  Martinez was originally scheduled for a superfight with 10th Planet competitor Kyle Boehm before being called for the absolute division.

With only a few more days to go until the event everyone should probably keep their fingers crossed that all of the absolute competitors stay healthy and make it to the stage on Friday night, seeing as 3 of the 4 competitors are now coming in with 2 weeks’ notice or less and the EBI graphics team has had to make more event flyers than you could count.  Yuri will be facing Martinez and Blank will be facing Casey in the first round match ups for the absolute division.  If I had to make a prediction as to who we will see in the finals, I would pick Jon Blank v. Yuri Simoes.  Blank submitted all four of his opponents in the EBI 17 middleweight bracket and has combat jiu jitsu experience, although he didn’t even need to throw a strike to win the belt last time.  He also recently took third place at the ADCC west coast trials, falling only to the division winner Josh Hinger by points.  Yuri is the current ADCC champion for the -99 kg division and an EBI veteran himself, although this will be his first time under combat jiu jitsu rules where he can utilize open hand strikes.  He also will have the size advantage if it ends up being him and Blank in the finals.  Eddie Bravo recently appeared on one of Joe Rogan’s Fight Companion podcasts and mentioned that Yuri is the #1 and Jon is the #2 seed, and he also expects to see them in the finals, although anything can happen in combat jiu jitsu.

*Competitors listed are as announced on social media and the card is subject to change. 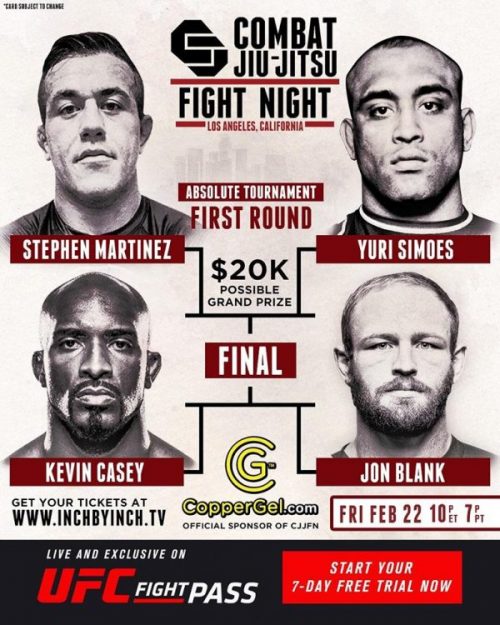 Arnold Allen targeting the winner of Chan Sung Jung vs. Dan Ige next

By Michael Henken 17 hours ago