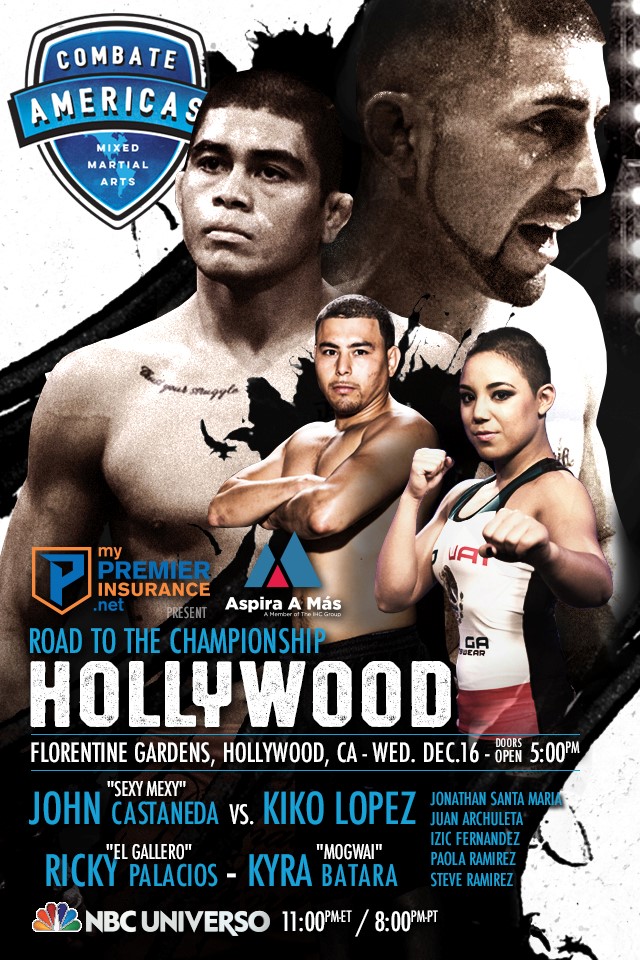 “This event represents Combate Americas coming of age, and presenting a lineup that is second to none with a collection of the brightest up-and-coming Hispanic fighters in the U.S.,” said McLaren.

Priced from $40, tickets for “Premier Insurance Services and Aspira Mas Present Combate Americas: Road To The Championship Hollywood,” are on sale at www.HollywoodFightNight.com.

In the bantamweight (135 pounds) main event of the live, four-fight telecast on NBC Universo, John “Sexy Mexy” Castaneda, fresh off his victory at the inaugural “Combate Americas: Road To The Championship” event in Las Vegas, Nev. on September 17, will square off with fellow striking sensation Federico “Kiko” Lopez.

The 23-year-old Castaneda (8-2), a seasoned striker who hails from Mankato, Minn., earned his third consecutive victory in the form of a unanimous decision over Justin Governale in the Combate Americas cage.

A 31-year-old member of Team Quest, Lopez (10-5) of Murrieta, Calif. is riding a five fight win streak, with four of those victories having come by way of either (T)KO or submission.

Palacios (5-1), a 28-year-old resident of Mission, Texas who also boasts an unblemished professional boxing record of 2-0-1, scored a thunderous, first round (1:00) KO on Benji Gomez with a head kick at the “Combate Americas: Road To The Championship” event on September 17, while the 26-year-old Paredes, another member of Team Quest, is looking to return to the win column after suffering a loss in July that snapped a two-fight win streak.

In a featured women’s atomweight (105 pounds) attraction on the live telecast, Kyra “Mogwai” Batara will collide with “Lightning Liz McCarthy.

Fighting out of Las Vegas, Batara (3-3) is a 21-year-old protégé of Brazilian Jiu-Jitsu guru Eddie Bravo.  During the “Combate Americas: Road To The Championship” event in Las Vegas, Batara pulled off a stunning upset win via unanimous decision over Nicdali Rivera-Calanoc, a former world championship challenger with five times as many professional bouts as Batara.

The 29-year-old McCarthy (2-3), also fighting out of Las Vegas, is a four-time veteran of Invicta FC, the world’s premier all-women’s MMA league.   Prior to her professional debut at Invicta FC 2 where she defeated Jessica Philippus by way of first round (5:00) TKO (doctor stoppage) on July 28, 2012, McCarthy amassed a perfect, 6-0 record as an amateur.

The complete, five-bout preliminary card for “Combate Americas: Road To The Championship Hollywood” will be announced soon.

Doors at Florentine Gardens open at 5 p.m. PT for the event, and the first preliminary bout will begin at 6 p.m.

ABOUT COMBATE AMERICAS
Combate Americas, LLC. (www.CombateAmericas.com) is the first U.S. Hispanic Mixed Martial Arts (MMA) sports franchise in history, designed to build Latino fighting champions and serve Hispanic fans, one of the world’s most avid groups of prize fighting enthusiasts.  The Combate Americas franchise includes reality TV programming, live events and mobile programming.  The company’s CEO, Campbell McLaren, is universally recognized as the co-founder/co-creator of the Ultimate Fighting Championship (UFC).  New York Magazine described McLaren as “the marketing genius behind the UFC” and Yahoo! Sports proclaimed that he “knows more about the sport than just about anyone in it today.”  With an unprecedented product and a blue-chip ownership and management team, Combate Americas is poised to break new ground and bring about a new era in world championship level MMA competition.

About NBC UNIVERSO:
NBC UNIVERSO (www.nbcuniverso.com) is a modern entertainment and sports cable channel for Latinos, bringing the world’s top sports franchises and edgy programming to more than 40 million households in the U.S. As one of the most widely available modern cable channels for U.S. Latinos, NBC UNIVERSO delivers a thrilling mix of exclusive sports action – including FIFA World Cup™, Liga MX, Premier League, NASCAR Mexico Series, NFL and The 2016 Rio Olympics – along with signature series, blockbuster movies, music, must-see live events and strategic acquisitions, on TV, online and mobile devices. NBC UNIVERSO is part of NBCUniversal Telemundo Enterprises, a division of NBCUniversal (www.nbcuniversal.com), one of the world’s leading media and entertainment companies. NBCUniversal is a subsidiary of Comcast Corporation (www.comcastcorporation.com). To find the NBC UNIVERSO channel number in your area, please visit www.nbcuniverso.com/encuentralo.

By Edward Carbajal 35 mins ago