MEXICO’S TOP RISING STARS FACE OFF WITH RIVALS FROM THE U.S., SPAIN, BRAZIL AND CHILE

TICKETS ON SALE AT TAQUILLAEXPRESS.COM

Combate Americas today announced its return to Tijuana, Mexico with a live Mixed Martial Arts (MMA) event featuring matchups between a collection of the most ferocious, rising stars from Mexico and a lineup of electrifying combatants from the U.S., Spain, Brazil, and Chile, at Auditorio Municipal Tijuana. 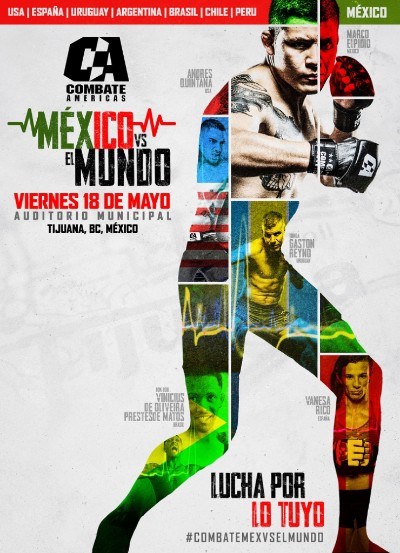 Priced from 330.00$ MXN, tickets for “Combate Americas: Mexico vs. El Mundo” are on sale at taquillaexpress.com.

Alex “Bam” Velasco (7-1) of Ensenada will square off with fellow striking sensation  Daniel “D-Rod” Rodriguez (5-1) of Los Angeles at lightweight.

Additional bouts for “Combate Americas” Mexico vs. El Mundo” will be announced soon.

Doors at Auditorio Municipal Tijuana will open at 6 p.m. local time, and the first preliminary bout will start at 7 p.m.

The event takes place one week after the “Combate Americas: Mexico vs. USA” event, which will be highlighted by a collection of fighters representing Mexico against opponents from the U.S.