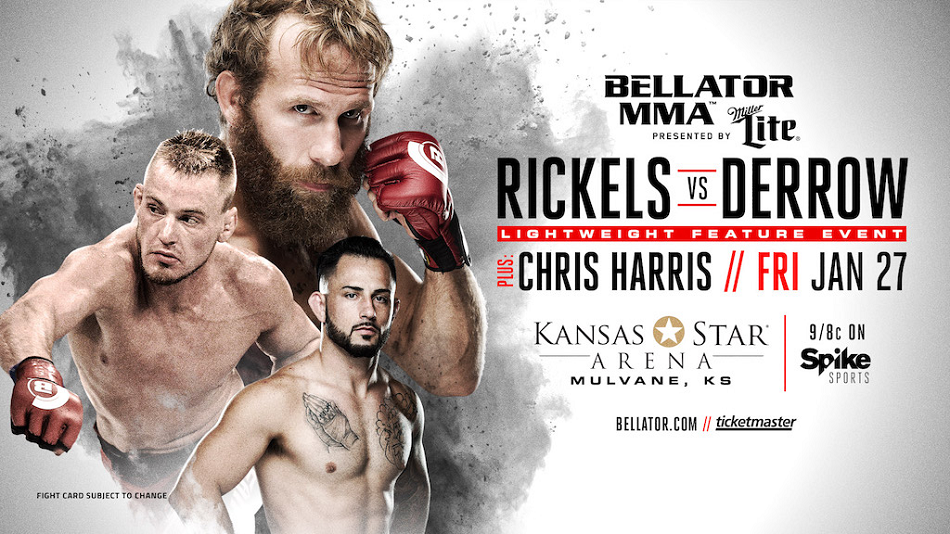 Tickets for the event starting at just $24, go on sale Saturday, Dec. 3 with an exclusive two-day Bellator Nation pre-sale beginning November 30, and can be purchased at Ticketmaster.com or KansasStarEventCenter.com. The event takes place one week after the extremely anticipated “Bellator 170: Ortiz vs. Sonnen” in Inglewood, Calif.

“The King of Kansas” will once again compete on the Spike-televised main card of Bellator MMA’s return to Kansas Star Arena. A 17-fight veteran of Bellator MMA, Rickels will return to action for the first time since competing against Melvin Guillard this past summer. “The Caveman” has strung together an impressive career, totaling 11 wins over his seven years with the promotion, including four of his five career knockouts. A native of Derby, Kansas, Rickles recently delivered a brutal first round knockout in his co-main clash with Bobby Cooper at “Bellator 150: Kongo vs. Spartan.” The 27-year-old Rickels now prepares for Aaron Derrow, who enters the bout undefeated since joining Bellator MMA in 2014.

A native of Blue Springs, Missouri, Derrow has made an immediate impact on the promotion, collecting victories in each of his first two fights under the Bellator MMA umbrella. Following his hot start, “Daddy Long Legs” will now be tasked with one of the lightweight divisions most proven veterans in David Rickels. Of his 14 career wins, Derrow has finished his opponent in 12 of them, including 10 of the submission variety. The 29-year-old Derrow has scored two knockouts, each of which came in the first twenty seconds of action. Derrow will have his hands full with Rickels and the raucous hometown crowd that follows him when the two enter the cage on January 27.

With an unblemished mark of 7-0, Harris enters the cage riding an impressive string of success to begin his professional career. Fighting out of Wichita, Kansas, Harris will have the luxury of competing in front of his home crowd as he prepares to make his third appearance under the Bellator MMA banner. Harris has a knack for finishing his opponents early and often, recording six wins by way of knockout or submission, including four in the first round. The 26-year-old knockout artist will look to build off of a commendable 2016 campaign that saw him emerge victorious in each of his three contests, including a pair of wins with the Scott Coker-led promotion.

Also boasting an undefeated record through five career bouts, the 22-year-old Young will make his promotional debut against the equally impressive Harris. Of his five career wins, four have come by way of submission, with each of the four finishes occurring in the opening round of action. Prior to making his professional debut in 2014, the submission specialist had similar success on the amateur circuit, where he collected four submission victories over a five-fight span. Fighting out of Urbandale, Iowa, the 6’4’’ Young will also hold a significant height advantage over the 5’11’’ Harris as he prepares to challenge one of the most aggressive opponents of his career.

By Adam Martin 54 mins ago