Deauntra Smith is set to make the grand walkout to the cage at Art of War: All Star Weekend, day 2. Smith will indeed be entering his first mixed martial arts contest. However, the EEFC/South Jersey BJJ prospect has been a kickboxing force to be reckon with for years!

Originally, Smith embraces his passion for combat sports by training in a predominant kickboxing gym. After slaying the competition on his feet and in the ring, the youthful educator focused on getting his groundwork up to speed to segue into his MMA career.

On Saturday, February 8th, Smith takes on Crazy 88’s, James Mullens in a 145lb contest. Clearly comfortable on his feet, the lingering question was how has his ground game developed to which Smith replied, “I had a couple grappling matches with higher belts and I destroyed them. I won Naga…” Continuing with reassurance “so jiu jitsu wise. I’m fine. I don’t fear anything on the ground!”

Discussing Mullens as an opponent, Smith breaks down his opponent stating:

“I have experience fighting against crazy 88 guy.” Emphasizing, “the only thing I can really say about him is if he wants to make this a Kickboxing fight then that’s going to play to my strengths! I don’t think at all he should stand with me…That’s just me personally! There’s a lot of I people I think that shouldn’t stand with me. And if it becomes a kickboxing fight…it’s my world.”

Adding to the mix, he foresees this bout being a total domination as he says, “I think it’s the first round I’m gonna feel him out and see how he throws that overhand right. And same thing as last time, I think I’m gonna catch him with a counter. Last fight I told you I think it was going to be a counter punch that gave him. I think this time it’s gonna be a counter hook that’s gonna end the show in the second round.”

Be sure to check out Art of War: All Star Weekend 2. Saturday February 7th and 8th at the 2300 Arena in Philadelphia, PA. Art of War is one of the fastest growing promotions this side of the east coast has seen in years, and they aren’t slowing down!

Also, make sure to stay locked to MyMMANews.com for live results from both nights of fights as we’ll be on the scene for Art of War: All Star Weekend 2! 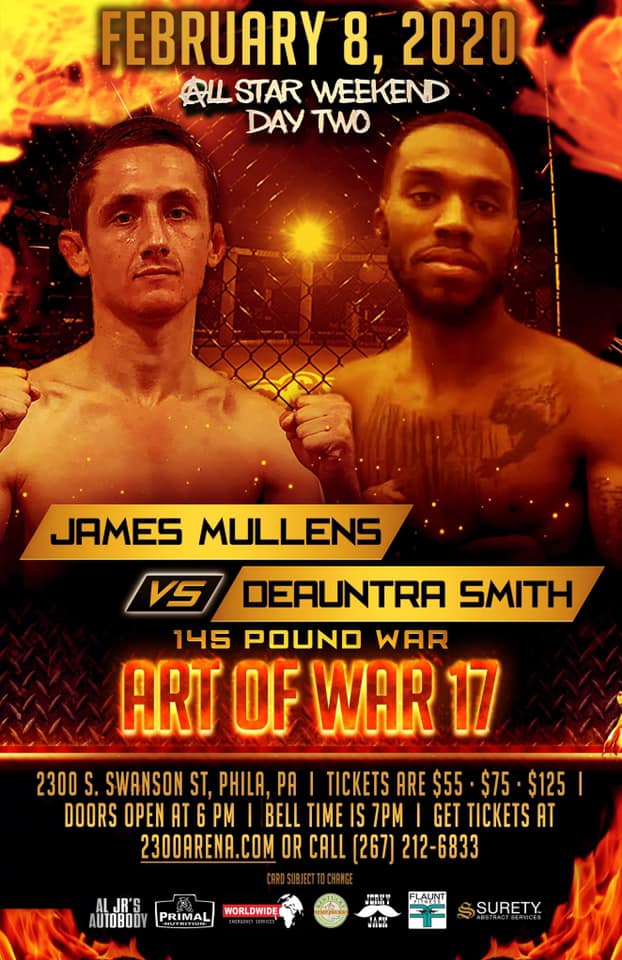