For this fight you’ve had a couple opponent changes. How has that affected your fight camp?

“It is what it is. We make a few adjustments but it’s the fight game; you adjust, move on, and get ready for this next guy. It doesn’t change our game plan a lot. I mean, I usually stick to a pretty similar game plan every fight. So, go out there, be the best me and everything will go good.”

What do you see in the challenges of facing Ivan?

“He’s a strong guy, a tough guy. He’s undefeated, he’s got a little bit of a name in Russia. He’s the number one prospect in Russia, but he’s the new guy, the debut guy; and I’m going to treat him like that. He’s the new me. That’s how I got to look at it and that’s what it is. I’m coming in, this will be my seventh UFC fight. I’m not going to let him disrespect me, take what I’ve earned. I’m going to come at him in his home country, in Russia. It’s that kind of fight. It’s a gritty fight. It’s a dog fight. And I’m up for it this is the type of fight I live for, that I’ve always dreamt of in my fighting career. I’ve always wanted to fight in Russia. Now, I get a chance against a tough Russian opponent, who’s undefeated. You know, it’s kind of like one of those Rocky or Creed stories. You’re going in there and of course I’m the underdog too. So, it’s the underdog American going against the tough Russian. I love it.”

How can you take your octagon experience and use it as an advantage?

“Just keep moving forward. He has a lot of experience too.? I doubt he’s going to crumble under the pressure just because it’s a different promotion name. I’ve been in gritty fights before; I’m going to use that experience in this fight. He’s a dog fight type of guy, that’s where we’re going to take it. It’s gonna be a fun fight.” 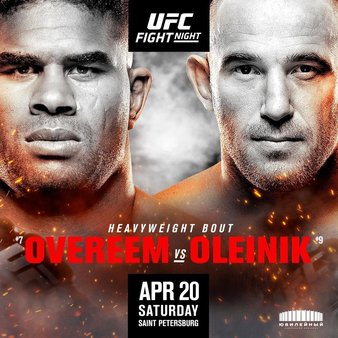 By Doug Geller 2 hours ago