PROMOTIONAL DEBUT OF EWERTON TEIXEIRA COMPLETES THE MAIN CARD OF ‘BELLATOR 143: WARREN VS. DAVIS,’ WHEN HE FACES VINICIUS QUEIROZ 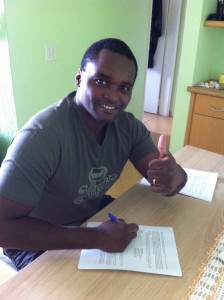 A heavyweight tilt featuring feared striker Ewerton Teixeira (3-0) taking on Vinicius Queiroz (7-3) has been added to the main card of “Bellator 143: Warren vs. Davis” at State Farm Arena in Hidalgo, Texas on September 25.

Tickets for “Bellator 143: Warren vs. Davis,” which start at just $20, are on sale now at Ticketmaster.com and the State Farm Arena box office. Doors for the event open at 5 p.m. CT local time, and the first contest takes place a half an hour later.

A black belt in Kyokushin karate, the 33-year-old Teixeira has been racking up titles in striking competitions for more than a decade. Teixeira reached the pinnacle of standup fighting in 2008, when he earned that year’s K-1 World Grand Prix in Fukuoka title and then fought his way to the K-1 World Grand Prix Final’s championship bout. Teixeira turned his attention to MMA in 2012, and has remained undefeated through his first three professional contests in the sport and is now ready to try his hand at MMA’s highest level.

Queiroz will be making his fourth appearance under the Bellator MMA banner when he enters the cage on September 25. A veteran of Ultimate Fighting Championship, “Spartan” has never allowed one of his seven professional victories to reach the judges’ scorecards. The Team Nogueira standout was slated to compete against Cheick Kongo at “Bellator 106: Chandler vs. Alvarez 2” but an injury derailed the tilt. After an inactive 2014, the 31-year-old will look to change the tide in 2015.

Further down the preliminary bouts, Jose Flores will make his Bellator MMA debut and look to keep his undefeated record intact in the process. The 27-year-old has finished all three of his fights on the regional circuit via submission. He will be going up against Gonzalez, who shares a perfect record through his first three professional bouts. Both fighters fight out of McAllen, TX, just a short drive from the State Farm Arena.

Another pair of talented local prospects will look to wow the home crowd when Guilherme Farias da Costa aims to stay unbeaten against Jared Chaffe, who most recently suffered the first loss of his professional career after the doctor stopped his fight due to a severe cut.

In another fight that will see someone’s undefeated record come to an end, San Diego’s Bryce Mejia will meet Abdul Razak Alhassan, who trains out of Arlington, TX.