The promotion announced the signing via Twitter on Thursday, March 11.

It’s been well over a year since Barao last competed inside the cage. The Brazilian was released by the UFC in December 2019 after suffering five-straight losses inside the octagon.

He most recently dropped a unanimous decision defeat to Douglas Andrade in a featherweight bout at UFC on ESPN+ 22 in November 2019.

He holds just one victory in his last eight appearances, a unanimous decision nod over Phillipe Nover at 145 pounds at UFC Fight Night 95 in September 2016.

Renan Barao came into the UFC at 27-1 in May 2011. After two straight-victories under the World Extreme Cagefighting banner. Barao was a part of the WEC and UFC merger in January 2011.

He rattled off three-consecutive octagon victories before beating Urijah Faber via unanimous decision, capturing the interim UFC bantamweight strap at UFC 149 in July 2012.

He defended the belt twice by finishing Michael McDonald and Eddie Wineland. Once then-champion Dominick Cruz suffered a groin injury, he vacated the belt.

Barao then rematched Faber for the vacant title, winning by first-round TKO at UFC 169 in February 2014. “The Baron” would go on to win only two more fights in the next eight years. 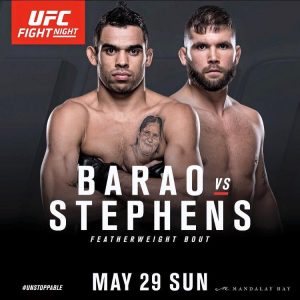 He lost his first title defense by fourth-round TKO to T.J. Dillashaw at UFC on FOX 16 in May 2015. He followed up by moving to featherweight, dropping a decision loss to Jeremy Stephens at UFC Fight Night 188 in May 2016, then leading to his current 1-5 run.

There is no official word on when the former UFC bantamweight king will make his debut for EMC.