Sometimes the storyline of a battle between mixed martial artists can add to the intrigue of a fight.  The main event and title fight (145) lbs at Louis Neglia’s Ring of Combat 60 delivers this and more.

ROC 54 in March of 2016, matched two up and coming prospects, both making their professional debut.  James “Speedy” Gonzalez (4-1) faced off with Mike “the Lone Wolf” Trizano (4-0).

Trizano defeated Gonzalez via unanimous decision. Fast forward to 18 months later and 4 straight wins by both men, Speedy has a chance to avenge his only loss, as the Lone Wolf steps in to replace his Tiger Schulman teammate, Julio Arce, who withdrew to appear on Dana White’s Contender Series. 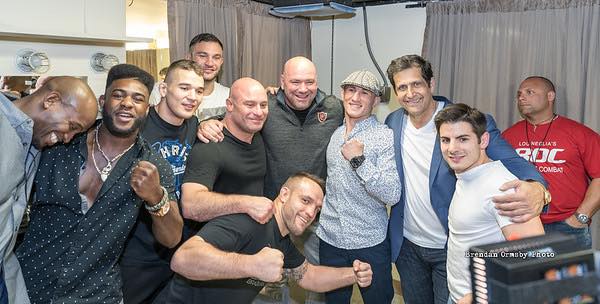 Gonzalez fell in love with jiu-jitsu about seven years ago and after competing for a few years, transitioned into MMA. He has had many elite training partners as he calls Serra-Longo Fight Team  home.  Aljamain Sterling, Chris Weidman, Matt Serra among others have had a profound influence on him. Serra-Longo has been a mainstay on the New York MMA community and the UFC as numerous fighters have tasted success at the highest level.  Gonzalez is working hard to follow in their footsteps.

His opponent is also training with monsters of the sport.  Tiger Schulman has recently helped produce UFC star, Jimme “El Terror” Rivera, “Hurricane” Shane Burgos, Julio Arce, Lyman Good, and Nick Pace. Trizano obviously has to enter this fight confident, but has his amazing team to keep him grounded as I’m sure he would like to taste the same UFC success as his teammates have.

Gonzalez vs Trizano… Tiger Schulman vs Serra-Longo…Main Event…Rematch…This is going to be a barn burner!

MyMMANews will be cageside at ROC with results, photos, and a full recap. Tune in to the interview James “Speedy” Gonzalez below.  He’s a very humble, nice young man who will not be so nice when he enters the cage.

ROC 60 goes down Sep. 15 at the Tropicana in Atlantic City, New Jersey.  For tickets click here.

By Dylan Bowker 47 mins ago